The word “consequential” is a popular fallback for commentators seeking to invest a particular event with the significance it might warrant. On occasions, the word is misused to inflate a moment that does not rise to the level of “consequential”.

However, it would be difficult to argue against the proposition that leaders of the world’s largest economies are meeting late this week in Osaka at what is potentially a consequential moment in the reordering of a global power balance.

China’s rise and America’s ragged – sometimes bellicose – response under a Donald Trump administration is proving to be the most disruptive event in world economic and geopolitical history arguably since the allies prevailed in the second world war.

Read more: US-Iran conflict escalates again, raising the threat of another war in the Middle East

Whether Osaka proves to be a constructive occasion in an evolving and messy rivalry or simply a wasted opportunity remains to be seen. But stakes are very high indeed.

The proposed meeting between US President Donald Trump and his Chinese counterpart Xi Jinping to cauterise a simmering trade war is shaping as one of the more significant encounters between leaders of competing superpowers since the end of the Cold War.

Trump and Xi have spoken on the telephone in the lead-up to Osaka. Both sides indicated a desire to achieve a compromise on a long list of American complaints about what are perceived to be China’s mercantilist trading practices.

These include manipulation of its currency to make its exports more competitive; intellectual property theft that seeks to short-circuit its acquisition of advanced technology; a discriminatory regulatory environment that tilts the playing field against American companies seeking to do business in China; and use of companies like technology giant Huawei to spy on the west.

A looming “technology war” in which the US and China are at each other’s throats in the technology space is one of many disruptive elements of a trade conflict.

The Trump administration’s stated aim is to overcome a sizeable trade gap between the two countries. As a provocative down payment it imposed 25% tariffs on $250 billion worth of Chinese imports, with threats to expand those tariff penalties to another $300 billion.

China has retaliated by imposing its own tariffs on US imports.

If Trump and Xi cannot agree on steps that would enable their trade officials to return to the negotiating table, a highly disruptive trade war may well ensue, with unpredictable consequences for the global economy.

The World Bank, International Monetary Fund and G20 leaders, including Australia’s Prime Minister Scott Morrison, have been calling for a common sense approach to avoid a further deterioration in a global trading environment.

In a keynote foreign policy speech on the eve of the Osaka summit, Morrison called on Washington and Beijing to arrive at a compromise on their differences.

It is therefore important that US-China trade tensions are resolved in the broader context of their special power responsibilities, in a way that is WTO consistent and does not undermine the interests of other parties, including Australia.

Given the sensitivities around Australia’s alliance relationship with the US, Morrison skated around America’s significant responsibility for a deteriorating global trading environment. Washington’s undermining of the World Trade Organisation, reduced to an empty shell, is part of this story.

Read more: As tensions ratchet up between China and the US, Australia risks being caught in the crossfire

As a trading nation heavily dependent on open markets, Australia risks being wedged between its security guarantor and its main economic partner. China receives one third of Australian exports.

Trade tensions between an established power and a rising one are disruptive enough on their own. But world leaders are meeting in Osaka against a background of a slew of other challenges that are threatening global stability.

These include a slowing global economy, due partly to uncertainties surrounding the US-China trading relationship. There is also the threatened war in the Middle East that would interfere – and possibly sever – an oil lifeline. Then there are localised conflicts such as those in Venezuela, which risk further destabilisation of regions in which they reside. And perhaps most serious issue of all is the erosion of America’s global leadership role.

Washington’s retreat into an “America First” mindset is depriving the world of what has been taken for granted since the end of the second world war. This is US leadership in guiding and nurturing institutions that constitute a post-war architecture.

Bodies like the United Nations, the International Monetary Fund, the World Bank, the General Agreement on Tariffs and Trade (GATT) as a forerunner to the WTO, the North Atlantic Treaty Organisation (NATO) and a host of other institutions would not have been possible without American inspiration and leadership.

Now, a Trump administration seems intent on diminishing these global overseers of a rules-based international order. Indeed, it is not clear whether Washington even believes in a rules-based order, as opposed to one in which it is everyone for themselves.

This is the toxic environment confronting leaders of 19 individual countries plus the European Union, who represent 90% of gross world product, 80% of world trade and two-thirds of the world’s population.

As is normal at these events, global leaders will face an agenda that includes, as the most important topic, “bolstering global growth, trade, and investment”.

This comes against a background of slowing global growth to 3.3% this year from an earlier forecast of 3.5%. The International Monetary Fund is predicting a slight pick-up in 2020, but this will depend on a resolution of US-China trade tensions.

Overlaying concerns among world leaders about a slowing global economy will be the threat of “de-globalisation”, in which supply chains are disrupted more generally.

What this portends is global economic fragmentation in which there is a breakdown in a WTO-supervised system, however imperfect.

This risks decades of relatively orderly global economic expansion that has lifted hundreds of millions out of poverty. In China’s case, it has enabled one of the more remarkable transformations in world economic history.

What might help us to appreciate the significance of this gathering is to go back a decade to the first G20 in 2008, when the world found itself in the maw of a global financial crisis that threatened to bring an international financial system crashing down. 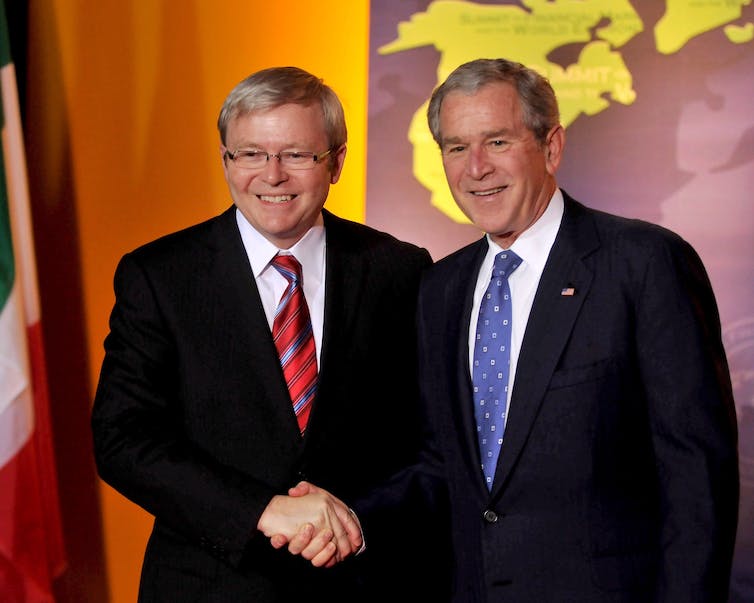 On that occasion, world leaders came together in Washington to put in place confidence-building measures that helped stabilise a global economy under enormous stress.

At that inaugural meeting, the G20 proved its worth under American leadership. The US Treasury Secretary at the time, Henry Paulson played an important role in measures adopted to strengthen global economic governance.

A critical element of deliberations in 2008 was a resolve to reject protectionism and refrain from imposing new barriers to investment or to trade in goods and services inconsistent with WTO principles.

Today, there is a lack of consensus between America and its allies on a host of issues. These range from how to deal with the Iran crisis to the need to bolster a rules-based international order.

Ten years on from the 2008 G20, the world should hope that a similar crisis does not arise that would require American leadership of the order was demonstrated a decade ago. It is not clear such leadership would be forthcoming.