The latest government statistics, released last week, show that from 2001-2016, the rate of cardiac events (heart attacks or unstable angina) fell by more than half among Australian women.

That’s largely because of greater education about risk factors for heart disease (smoking rates continue to fall), and medical advances in prevention and treatment.

One thing that might reduce rates of heart disease even further is to make sure women, in particular, are asked about their current mental health. This can be a pointer to a hidden risk of developing heart disease in the future.

Mental illness can directly affect heart health by placing extra pressure on the cardiovascular system. Depression has been linked to inflammation, which can clog a person’s arteries. Depression also increases the presence of stress hormones in the body, which dull the response of the heart and arteries to demands for increased blood flow.

Less direct effects on heart health include the impact of depression on a person’s health behaviours, such as diet and exercise, and their connections with other people.

We’ve shown Australian middle-aged women with depression have double the risk of having a heart attack or stroke in the following 18 years compared to women without depression.

Cardiovascular diseases including stroke, coronary heart disease, and heart failure remain the number one killer of Australian women. In 2016, three in ten deaths were due to heart disease. Indigenous women are twice as likely as non-Indigenous women to die from this cause.

While we’re seeing significant reductions in the number of people getting heart disease overall, the latest report shows the opposite is true in young women. The rate of cardiovascular events like stroke is increasing in women aged 35 to 54.

Drinking alcohol, smoking, high cholesterol, type 2 diabetes, overweight/obesity, and a family history of heart disease are some of the important predictors of a person developing heart disease over the next five years.

So if someone is considered to have high risk of a cardiovascular event, this risk can be managed with the help of a medical professional.

April 1 saw the introduction of two new Medicare item numbers allowing eligible patients (those aged 45 and over, or 35 and over for Aboriginal and Torres Strait Islander peoples) to be assessed for their risk of developing cardiovascular disease. This is known as a heart health check.

Using the Australian Risk Calculator, the doctor collects information to assess a patient’s risk of experiencing a cardiovascular event in the next five years.

If a person is identified as being sufficiently at risk, they will be targeted with preventative measures such as assistance with lifestyle modifications, and/or interventions like blood pressure or cholesterol medications.

Women have some unique risk factors

While many of the common risk factors for heart disease are shared between women and men, young and middle aged women have some that men don’t.

Polycystic ovary syndrome and complications during and after pregnancy (such as gestational diabetes and pre-eclampsia) are all important considerations.

We’re only beginning to understand how these factors affect a woman’s risk, but they are likely to be as important as traditional risk factors in the context of heart health checks. 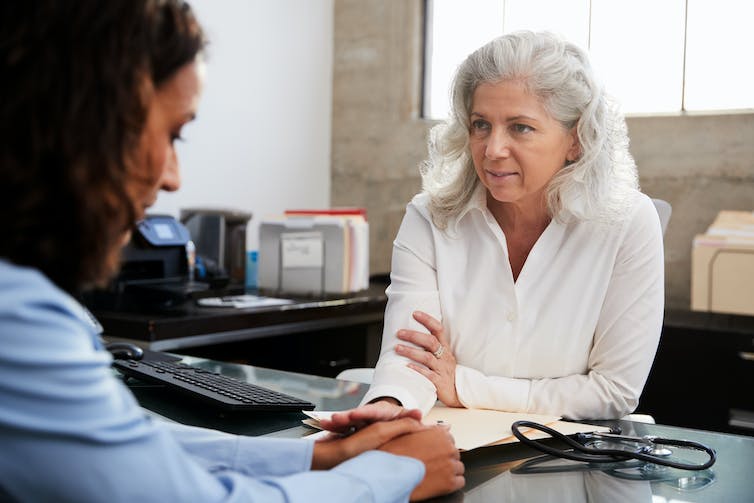 Heart health checks are a good thing. They could be even more effective if they assessed mental health as a risk factor for heart disease. From shutterstock.com

Another common issue in young women that influences heart disease risk is poor mental health. Common mental disorders like depression are more common in women than men until age 75.

Both heart disease and depression are largely socially determined, especially for women and girls. Early life trauma, poverty, and gendered violence and discrimination can accumulate across a woman’s lifespan to shape her risk of heart disease and stroke.

We did some statistical modelling to see whether depression should be added to the risk equation that underpins the heart health checks.

For women who reported depression in this context, we were able to more accurately predict whether they’d go on to develop heart disease over the next ten years.

While more research is needed, asking about a woman’s mental health may help GPs better identify risk of heart disease in younger women.

Read more: Biology is partly to blame for high rates of mental illness in women – the rest is social

Large population-based studies show reducing the prevalence of depression could have major implications for the prevention of heart disease and stroke. One study found having a poor psychosocial profile (depression, stress, isolation and anxiety) contributes 32% of the risk for heart attacks across the population.

In other words, if these psychosocial issues were eliminated, the incidence of heart attacks would be reduced by one-third.

Given the burden of these psychosocial issues is greater for women than men, women may have even more to gain if depression was targeted as part of preventing heart disease.

How can we address depression as a risk factor?

The heart health checks represent a significant step in the government’s investment in preventive medicine and public health.

While time poor clinicians can’t be expected to capture an infinite number of risk factors in a short consultation, these sessions may present a good opportunity for GPs to ask their patients about their mental health in the context of their heart disease risk. Equally, this may be a good time for patients to flag any concerns about their mental health with their GP.

There are few studies yet that definitively show treating depression will prevent a first heart attack or a recurrent event.

This is especially true for women, who are under-represented in this type of research. One study, where participants were given psychological therapy after a cardiac event like a heart attack, found the intervention benefited future heart health outcomes for “white men, but not other subgroups”.

We need more research to tell us if and how treating depression might prevent heart disease and stroke, especially for women. In the meantime, there are many free or subsidised options for the management of depression available either via your GP (psychologists and counsellors) or online.