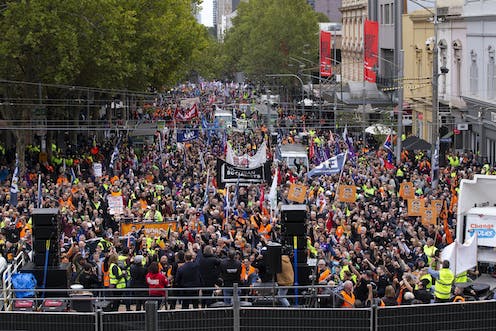 This article is part of an election series on wages, industrial relations, Labor and the union movement ahead of the 2019 federal election. You can read other pieces in the series here, here and here.

If, as the polls indicate, Labor wins government on May 18, what role will the unions play?

There are two mutually exclusive, extreme views on unions and politics – sometimes argued by the same people. There are outcries about Bill Shorten’s union past, with claims he made deals that gave too much to the employer and too little to workers. And there are cries that unions will hold all the cards after the election, and wages will go up.

I argue two key points. First, unions are still relevant, and they can be quite influential at elections. But the second point is that their hold over the ALP is not very strong when it is in government.

There is no doubt unions have built up their campaigning skills. This was one of their responses to the loss of institutional support they faced, especially for spreading wage increases, after the early 1990s.

In the 2007 election, fought principally over climate change and industrial relations, union campaigning was critical. The Coalition government’s WorkChoices legislation was divisive and electoral poison.

Unions’ “Your Rights at Work” campaign, according to statistical analysis, probably led to an additional swing of 1.3 to 2.0 percentage points in seats where unions ran campaigns (and possibly five to seven more Labor seats).

Rudd may have won anyway. But while unions’ campaigning in the very close 2010 election was much less effective, Gillard may not have held on that year without them. This was because of the “sophomore effect”, in which new Labor members from 2007 built up a base of electoral support to cushion themselves against an anti-government swing.

Read more: Grattan on Friday: Unions likely to be more challenging for a Shorten government than boats

By 2016, union campaigning had become more sophisticated. Although there was no WorkChoices to campaign against, they mobilised effectively in 22 seats and probably added 1.7-2.0 percentage points to the Labor vote in those seats, and swung about five seats from Coalition to Labor.

In 2019, unions are continuing to campaign, this time in 16 seats. The campaign is more focused on wages than in 2016. It will likely be more effective, though the additional impact it has in 2019, on top of that in 2016, may not be as noticeable.

Still, with polls tight, it is feasible that they could be the difference between a Shorten and a Morrison government.

Union influence on the ALP

The influence of unions on the ALP is always stronger when Labor is in opposition. The formal ties between the unions and ALP are strong, and this matters a lot in opposition. Unions account for defined proportions (typically, half) of voting blocs at Labor state conferences. From time to time, union officials’ next career move ends up being in a state or federal parliament.

But in government, Labor is influenced by many other groups. Power is centralised within Cabinet and its sub-committees, party conferences matter little, and lobbyists and corporates flock to Parliamentary offices and Canberra cafes and cocktail parties to have their say. Union power is very diluted.

Even Gough Whitlam, Labor Prime Minister from 1972 to 1975 and not someone from a union background, lamented the greatest economic failure of his government was to not have a closer relationship with the union movement, because of the impact its distance had on wages inflation over those years.

Partly in response to that failure, the closest relationship between a Labor government and unions occurred with the 1983-96 Accord. Union membership was still high, but the Labor government was heavily influenced by other forces. Even the then-powerful Amalgamated Metal Workers Union could not prevent its vision for an Australia Reconstructed being swamped by the bureaucrats’ preference for the emerging market liberal policy ideas.

By the time of the Rudd-Gillard governments, unions had a smaller share of the workforce, and there was no prospect of a revived Accord. When the government negotiated the Fair Work Act with both unions and employers, it gave roughly equal weight to both sides’ interests.

Despite their role in the 2007 election victory, unions’ influence on those governments was limited.

Unions and the 2019 federal election

The unions’ current “Change the Rules” campaign covers a broader set of issues than are encompassed by Labor promises. Perhaps the biggest potential area for controversy is on the scope for multi-employer bargaining.

Once upon a time, wage determination in Australia was mostly done at a multi-employer level. But wages were settled not through direct bargaining between the parties but by award decisions of the tribunal (in those days called the Arbitration Commission).

In the early 1990s, the then Labor government and ACTU leadership agreed that wage fixing would shift from a predominantly multi-employer, award basis to exclusively single-employer, bargaining-based methods. Replacing awards with bargaining was part of modernising IR, and making parties take responsibility for their own decisions.

But replacing predominantly multi-employer with exclusively single-employer bargaining produced a fundamental shift of power to corporations that persists to this day. At the time, its significance was lost to most unions, but it has become increasingly apparent since then and now dominates union thinking. That power shift is why employers are keen to maintain the status quo.

Yet even the OECD now sees merit in multi-employer bargaining, as wage coordination across sectors is “associated with better employment outcomes”. Labor’s policy supports some easing of the restriction where enterprise bargaining is failing, but the details are not fleshed out.

If the unions were sold or sold themselves short in these later Accord negotiations, a similar thing happened in the negotiations over Julia Gillard’s Fair Work Act. By then, unions had no more bargaining power with Labor than employers.

The Labor government wanted to be seen to be reintroducing balance after the excesses of John Howard’s WorkChoices. The unions prioritised abolishing individual contracts that undercut award conditions (the Australian Workplace Agreements) and reintroducing protections against unfair dismissal. The employers prioritised maintaining the majority of the provisions on industrial action and bargaining.

Although the outcome met neither side’s best hopes, both got what they prioritised. The details were altered in procedures enabling employers to use the Fair Work Commission to thwart industrial action or terminate agreements. But they remained largely in place. In the end these have turned out to be critical in minimising the power of workers to obtain wage increases.

These laws about industrial action aren’t the only factors that have led to the current wage stagnation. Other factors have been critical, including

As Labor nears the 2019 election, many of its stated policies are aimed at boosting wages for the lowest paid. Ultimately, though, doing something more substantial about stagnant wages requires policies that deal with the imbalance of power between capital and labour that developed over the past three decades.

We can expect a lot of furious activity, publicly and behind the scenes, by both unions and employer associations, in the period after the election if Labor wins.

The unions that will be of greater importance will depend on the issues involved: examples include United Voice and the Australian Services Union on low paid workers, the Community and Public Service Union on public service bargaining issues, the Nurses and Midwives Association on health issues, and the Australian Manufacturing Workers Union, United Voice, and many others on multi-employer bargaining.

On climate change, different unions will be pushing very different agendas, and there are even differences within unions.

In all cases, unions will have to counter the well-resourced lobbying by corporate groups, the market liberal inclinations of bureaucrats, and the nervousness of politicians.

The outcomes will ultimately determine whether workers generally have much of a chance of gaining real wage increases over the medium and longer term.