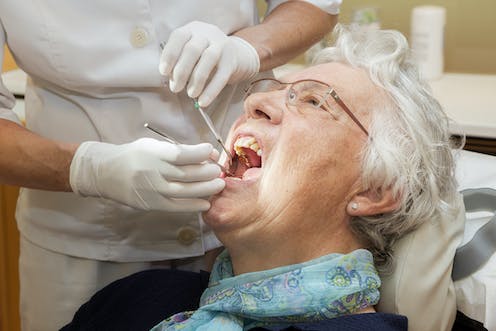 Opposition leader Bill Shorten declared on Sunday that Labor has a “vision of universal access to dental care in Australia”.

Labor’s pensioner dental plan would would give aged pensioners up to A$1,000 of subsidised...

Opposition leader Bill Shorten declared on Sunday that Labor has a “vision of universal access to dental care in Australia”.

Labor’s pensioner dental plan would would give aged pensioners up to A$1,000 of subsidised dental care every two years.

The policy is a welcome advance, but both sides should go further. The current system is a mess. It leaves many Australians without timely access to dental care, which only causes more painful and costly problems down the track.

Australians should demand their politicians introduce a universal dental care scheme. As with Medicare, this would ensure all Australians have access to subsidised basic dental care, including check-ups and treatment for tooth decay.

The Labor scheme is just a start on this road, covering pensioners over 65 and Seniors’ Health Care Card holders.

Read more: Two million Aussies delay or don't go to the dentist – here's how we can fix that

The mess we’re in

The result is that about two million Australian adults each year don’t get dental care when they need it because of the cost.

There have been various attempts to expand Commonwealth support for dental care over the years. But most have been abolished – whether because of cost overruns, a budget crunch, or change in governmental priorities. 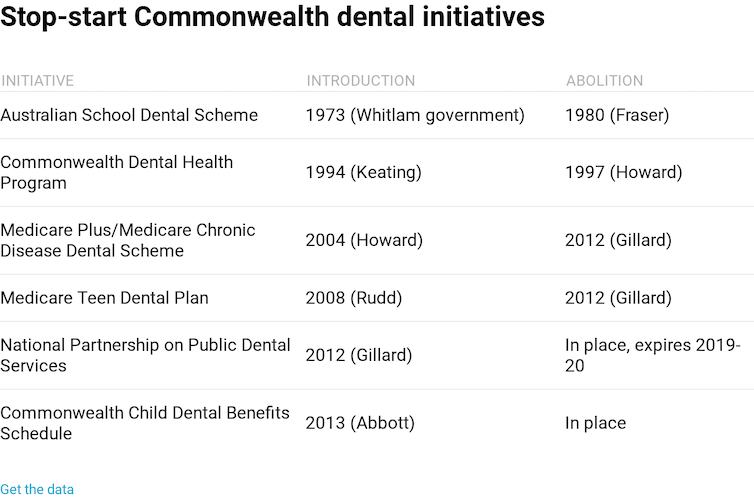 Note: There have been three National Partnership Agreements: ‘Treating More Public Dental Patients’ (1 January 2013-30 June 2015); ‘Adult Public Dental Services’ (1 July 2015-31 December 2016); and ‘Public Dental Services for Adults’ (1 January 2017-30 June 2019). The CDBS commenced under the Abbott government but was developed and legislated by the Gillard government. Grattan Institute Australia does offer some public dental care for adults, but the system is woefully inadequate. All state and territory governments operate means-tested public dental schemes, generally restricted to pensioners and concession card holders. About five million adults fit the eligibility criteria, but the schemes aren’t funded anywhere near enough to provide services to all eligible people who need care. Only about one-fifth of eligible adults receive care in the public system each year. In most states and territories, most people who seek public dental care have to wait more than a year to be seen. The wait is sometimes more than two years. 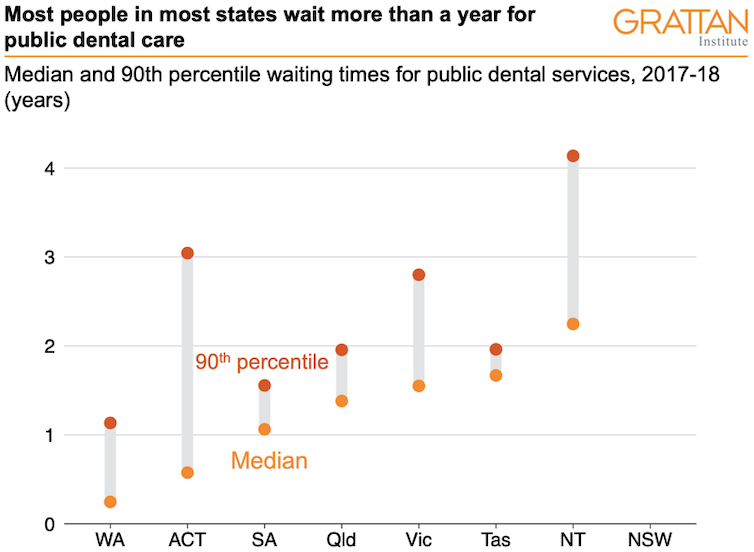 Productivity Commission 2019. Grattan Institute The states and territories spend A$836 million a year of their own money on public dental care. The Commonwealth chips in another A$108 million under a National Partnership Agreement that’s set to expire next year. The total is well short of what’s needed. By way of comparison, the federal government spends more than A$700 million each year subsidising dental care through the private health insurance rebate. From little dental problems, big problems grow The situation is a little better for children. More than half of Australian children are covered by the Child Dental Benefits Schedule (CDBS), a federal government initiative in place since 2013. The scheme covers children who live in low- and middle-income households – those that receive Family Tax Benefit Part A or another Commonwealth payment. Read more: Dental report card fail: half of adults and one-third of kids don't brush twice a day The main problem with the child dental scheme is that not many children use it. When the scheme was introduced, the Commonwealth expected about 80% of eligible children would use it. In the event, only 35% did so, and the figure has barely budged since then. 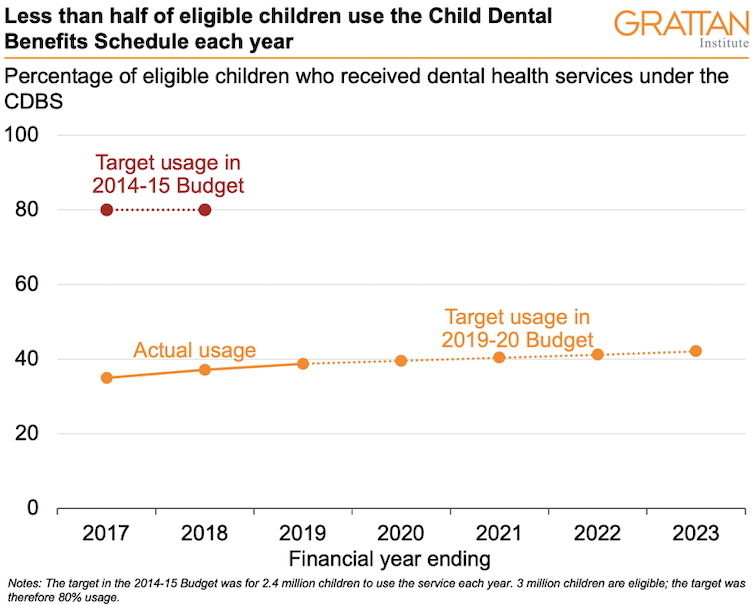 Health budget statements, various years/Grattan Institute It may be that usage is so low because many parents just don’t know that the child dental scheme exists and that their children are eligible for care under the scheme. Whatever the reasons, the Commonwealth should work with the states to promote the scheme and boost uptake – and in the process, rigorously determine which strategies are most effective in getting kids to the dentist. Filling the gap in Australia’s health system As we recommended in a recent Grattan Institute report, the Commonwealth government should fill the gap in Australia’s health system by moving towards a universal dental care scheme. This scheme should build on the child dental scheme, which provides a useful model that could be expanded to ultimately cover everyone. Read more: Grattan Orange Book. What the election should be about: priorities for the next government A universal scheme should allow care to be delivered by either private dentists or public clinics, just as the child dental scheme does. Consultations should be bulk-billed, meaning patients have no out-of-pocket costs. Prices should be set out in a tightly controlled schedule, much as in Medicare, with reasonable and closely monitored caps on usage. Dental practices that participate in the scheme should make public a range of data so the government – and taxpayers – can monitor their performance and the oral health outcomes of their patients. Steps towards a universal dental system It would be impractical to adopt a universal scheme overnight. We calculate it would cost about A$5.6 billion a year. The development of such a scheme would entail reshaping of Commonwealth-state relations, and would require more dentists and other oral health professionals than we currently have in Australia. Because of these challenges, we recommended the Commonwealth outline a ten-year plan for a universal scheme and start progressively expanding the number of people who are eligible for publicly funded care. Read more: Child tooth decay is on the rise, but few are brushing their teeth enough or seeing the dentist The Labor policy broadly fits with our recommendations. It builds on the child dental scheme and uses the public-private model we recommended. The extra funding – A$2.4 billion over the next four years, according to Labor – would represent a very big increase in public funding for dental care. Importantly, Labor sees this policy as a step towards a universal system. Once implemented, this pensioner dental scheme and the existing Child Dental Benefits arrangements will still leave a lot of Australians without subsidised Commonwealth dental cover. The next step is setting out a plan to get to provide that cover. When will coverage be extended to other Australians who need care? How will we expand the oral health workforce to ensure we can provide care to everyone who needs it? Australians should demand answers to these sort of questions – from both Labor and the Coalition.