In the world premiere production of Arbus and West, playwright Stephen Sewell appears to be straying into unchartered territory. He is renowned for being a hard-hitting political writer, whose epic plays are almost always described as “dark”.

It is far from documentary-like, however. The dialogue is charming and comedic, while the theme of women’s eviscerated position in society slowly boils and erupts to the surface.

The biographies of both Arbus and West are compelling fare. West is lauded as a trailblazing Hollywood performer, an activist and emblem of female sexual agency. Arbus is known for redefining the photographic gaze, focusing on human subjects who were considered pariahs and shunned by American society during the 1960s. In 1971, Arbus committed suicide.

West felt Arbus’s portrait of her was unflattering and in Sewell’s play never forgives her for it. But the play doesn’t rest entirely on fact. The women are at once real historical figures but also emblems of different artistic genres, political sensibilities, and strands of feminism. 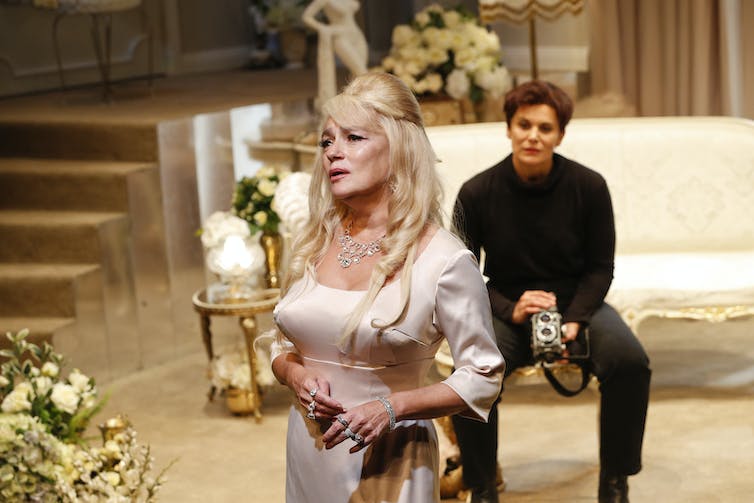 Arbus and West each have compelling biographies. Jeff Busby

Arbus and West’s encounter is a mere snapshot in time, taking place over the course of an afternoon. The production transforms this small moment into a sweeping panorama, as though the event of their meeting transcended historical time altogether, delivering a dreamy interpretation of the human condition, and the position of women within it.

The drama takes place in West’s apartment, a monument to camp style, with its chandelier, white upholstered furniture, and multi-storeyed window bathing the space in an almost transcendental light.

Many scenes unfold as duologues between Arbus (Diana Glenn) and West (Melita Jurisic), but also between West and her live-in dresser and devoted assistant Ruby (Jennifer Vuletic).

The play begins with Ruby eagerly preparing to assist West with her costume changes during a stage performance. We hear but do not see West singing before an adoring audience – a master of ceremony refers to the size of her breasts as the fictional crowd roars. 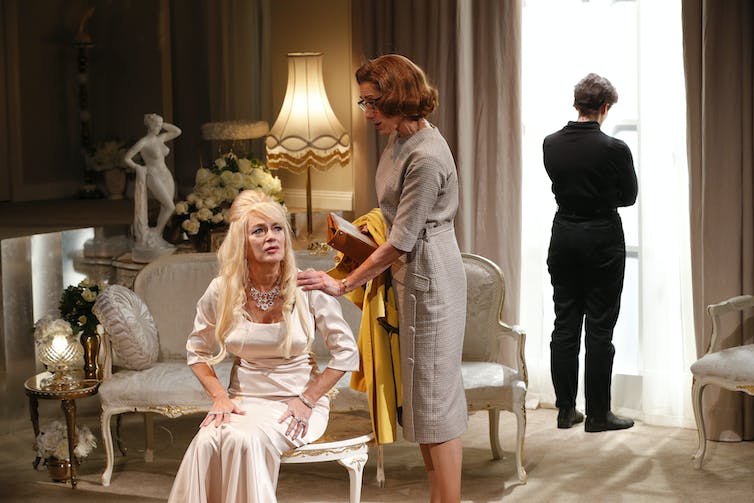 The play is a series of duologues between Arbus and West, and between West and her assistant Ruby. Jeff Busby

A sense of creeping nostalgia sweeps over the stage, enhanced by the effect of West’s voice travelling across distant space and time. West retreats backstage when Ruby reluctantly delivers the news of Arbus’s suicide. She shrugs it off but is clearly affected.

The play then jumps back in time to where West is preparing for an interview and photoshoot with an unknown photographer. When the photographer named Arbus arrives, we discover she’s a woman. West doesn’t know how to be the object of a woman’s gaze. It is foreign, disconcerting, far too intimate and penetrating.

Discussion about what is real and what is fantasy abound. Arbus seduces West with her poetic interpretation of life but repels her in equal measure. West and Ruby agree to unravel the mystery of Arbus: what does she want, why does she insist on capturing the truth, the ugly side of humanity?

By the end of the first act we see West in a state of rapture. She’s convinced that Arbus is an emissary come back from the dead to deliver her a message: that she’s been living a half-life from which she needs to “wake up”.

West unravels the message while spontaneously sharing an earth-shattering confession with Ruby, recalling the gruesome beheading of a childhood friend. The murderer was the girl’s father – his motive can only be described as Freudian. West has a dawning realisation: Arbus is a manifestation of the murdered girl. 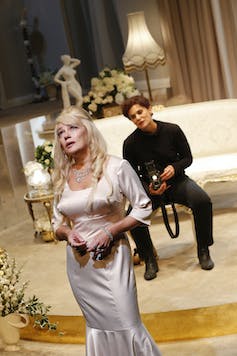 Jurisic as West is captivating in this moment, as she grapples with the truth and horror of the supressed memory. Sarah Goodes’ directorial hand is subtle, but shifts the mood convincingly with West delivering the details of the murder as a direct address to the audience.

Part of the pleasure in Sewell’s writing for this play is that the genre escapes us. Not a straight theatrical biopic, it verges on a supernatural crime thriller, a feeling greatly enhanced by the elements of production and the actors’ commanding performances.

But we already know who the dead person is (Arbus) and the circumstances surrounding the death: suicide. Here Sewell delivers a different kind of crime thriller that transcends the particulars of these characters’ lives. The silent villain is an enduring misogyny that sweeps across historical time like a nuclear explosion.

Towards the end of the play, Arbus whispers a secret into West’s ear. It is a galvanising moment, where the pair become conspirators. After much suspicion and argument, West finally acquiesces to Arbus’s desire to photograph her candidly.

It is as though the playwright is whispering to us. I can’t be sure of the message, but I suspect that Sewell has found a different way to be political with this play. He empathises with West’s realisation that being a woman is tantamount to living in a dream state, trapped in a condition of artifice and alienation from the world.

It is to enter a contractual agreement to live as though you were a species of living dead trapped beneath a crust of glamour. A narcotic existence, so seemingly pleasurable and sensual that the terror of it escapes all our notice.

I may be over-reaching here, but in the era of #MeToo in the Australian theatrical context there is something deeply hopeful about our most prominent playwrights developing a feminist politics in their work.

Arbus and West is playing at Arts Centre Melbourne until March 30.