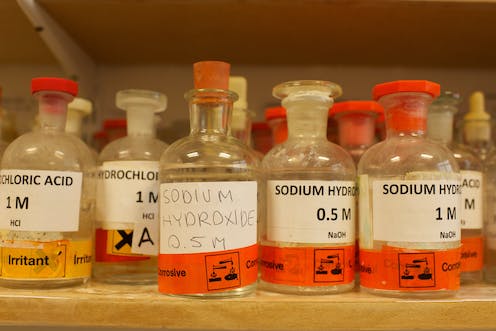 Three people were taken to hospital following a chemical spill at the Australian Nuclear Science and Technology Organisation facility at Lucas Heights this morning.

Despite the Sydney site’s notoriety as home to Australia’s only nuclear reactor, the ANSTO said the spill involved “approx 250mL of sodium hydroxide”, a substance that does not contain radioactive material.

Sodium hydroxide can be bought at many supermarkets or hardware stores for less than A$10 a kilogram.

Read more: The battle against bugs: it's time to end chemical warfare

Most people will have used sodium hydroxide (NaOH - commonly known as caustic soda or lye) at some point in their life, either in chemistry classes at school or as a strong cleaning agent in the home.

The chemical also has many other uses as varied as cleaning drains, making soap, and producing rocket fuel.

Even though the chemical is easily available, it can still be dangerous.

Don’t try this at home

At room temperature, NaOH is a white solid that looks something like its close relative table salt (NaCl – sodium chloride).

It dissolves readily in water, in a process that causes the mixture to heat up. In many industrial uses, such as the one in the incident at Lucas Heights, the NaOH is dissolved in water and used as such.

Solid NaOH should not be handled with bare skin. Any water on the skin (such as sweat), will dissolve some of the solid NaOH, creating a very concentrated solution directly in contact with the skin.

The chemistry of what happens when NaOH comes into contact with the skin is not dependent upon the concentration of material. The only thing that happens if there is more NaOH is that the reactions happen faster, thus causing more damage, more quickly.

The main danger from skin contact is that the sodium hydroxide reacts with the fats (and proteins) that make up the outside of the cells in skin.

This reaction has two effects. One is the obvious fact that if the cell membranes break down, the cells die. The other is, just like dissolving in water, the reaction with the membranes gives out heat.

This reaction is known as saponification – a process for making soap. If you’ve ever spilled a dilute solution of sodium hydroxide on your skin, and then washed it off with water, you’ve probably been surprised by the soapy sensation of the process.

The reaction of the NaOH with your skin literally produces soap.

In small quantities on the outer layer of skin, this is not particularly dangerous, but in concentrated form, the reaction can very quickly burn a hole through the skin and into the tissue beneath.

Anyone who has seen the 1999 movie Fight Club will know how painful that can be.

But this process of dissolving otherwise insoluble fats is the main household use for sodium hydroxide. When mixed with the fats that sometimes deposit in drains, the sodium hydroxide reacts to turn them into water soluble soap, which can then be washed away.

The treatment for almost all burns is the same. Remove the source of the burn (in this case the sodium hydroxide) and then flush the affected area for 20 minutes with cold running water.

In the case of a chemical burn, using copious amounts of running water will quickly dilute and wash away the cause of the burn.

If the victim has the burning chemical on their clothing, try to cut off the clothing rather than pull it off over the head, risking spreading the chemical to unaffected parts of the patient.

We are often surrounded by chemicals that pose potential serious dangers if incorrectly handled. This is doubly true for many industrial sites.

Read more: Your car is more likely to be hacked by your mechanic than a terrorist

For this reason we should be aware of their presence in our environment, the hazards that they pose, how to handle them safely, and how to respond correctly in the event of a spillage or contact with the body.

The three staff members at Lucas Heights were reportedly taken to the nearby Sutherland Hospital and were said to be in a stable condition.