Alita: Battle Angel is an interesting and wild ride, jam-packed full of concepts around cybernetics, dystopian futures and cyberpunk themes.

The film – in cinemas from today – revolves around Alita (Rosa Salazar), a female cyborg (with original human brain) that is recovered by cybernetic doctor Dyson Ido (Christoph Waltz) and brought into the world of the future (the film is set in 2563).

Hundreds of years after a catastrophic war, called “The Fall”, the population of Earth now resides in a wealthy sky city called Zalem and a sprawling junkyard called Iron City where the detritus from Zalem is dumped.

Read more: The science of parkour, the sport that seems reckless but takes poise and skill

We follow Alita’s story as she makes friends and enemies, and discovers more about her past. Her character is great – she has many of the mannerisms of a teenage girl combined with a determination and overarching sense of what is right – “I do not stand by in the presence of evil.”

So let’s dig into the many scientific concepts touched on in the film and see how far from reality they are, or might be in the future.

Alita goes through two cybernetic bodies in the film, with the second being especially advanced. A big part of the film is the interaction between the human and cyborg components, and a major component of that is touch, especially with respect to the main love interest Hugo (Keean Johnson).

A touching scene from the movie. 20th Century Fox.

As shown in the film, Alita’s cyborg body has a pretty advanced and location-sensitive sense of touch. In today’s world, robot touch, or tactile sensing, is relatively advanced (although not yet widely deployed) and uses a range of technologies including deformable skin that changes both its capacitance (to measure and “sense” the touch) and illuminance (to display the results of the touch).

Touch can also be detected in terms of changes in temperature, conductivity, resistance or even optical changes that result from a touch.

Verdict: Not a stretch. 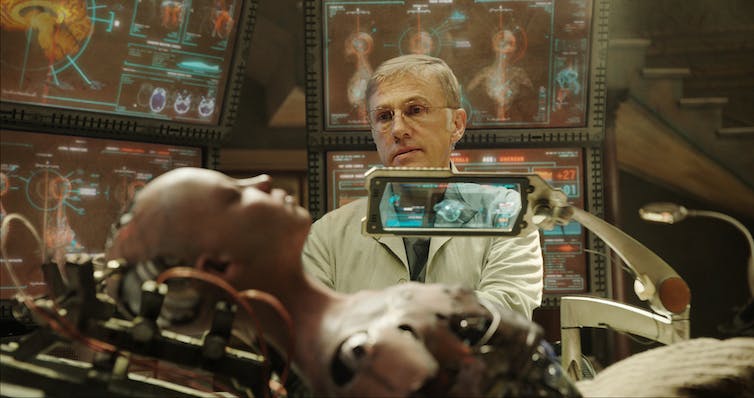 Like Ironman from The Avengers with his arc reactor, and The T-850 from the Terminator series with its hydrogen fuel cells, Alita is powered by an antimatter heart.

We are nowhere close to an antimatter-type energy source at this stage - current robots of similar size like the ones Boston Dynamics builds are increasingly being powered by relatively conventional batteries.

There are multiple major obstacles to overcome in using antimatter as any type of energy source, including finding an efficient way to obtain the antimatter in the first place and capturing the energy released from a matter-antimatter event.

Learning to use a body

Alita’s first steps upon waking up in her new body cause her to stumble, but only momentarily.

Robot walking and other related motion capabilities have long been an active field of research, with companies such as Boston Dynamics making very publicly visible strides (see what we did there) in biped (two legs) and quadruped (four legs) movement.

Alita has likely never used the exact body that she is given at first – but manages to walk, jump and fight fluently almost instantaneously.

This is in stark contrast to current robots learning from scratch to walk – which can take thousands of hours of training in simulation and then on the robot to get right.

Instead it’s likely that Alita has a range of pre-trained motion models for a variety of body configurations, and is able to rapidly tweak them to work on the body she is given.

Will cyborgs need to eat?

The doctor tells Alita she has to eat to provide nutrients to her (still organic) brain. This sounds reasonable, but she would need a complete digestive system to break the food down into nutrients and absorb them into her bloodstream.

Since her torso is completely inorganic, it’s more likely that fluid, vitamins, minerals and macronutrients (proteins, carbohydrates and fats) would be injected directly into her blood.

Today, some people who have had their intestines removed due to illness continue to live relatively normal lives.

We first see the repaired Alita as she wakes up from a deep sleep.

Scientists are not certain about all the reasons that sleep is needed, but it seems particularly important for the brain. While awake, your brain cells use lots of energy and produce lots of metabolic waste that accumulates around the cells.

At night while you sleep, your brain clears away the waste. Sleep also seems vital for remembering what you’ve learned.

Since Alita’s brain is human, it’s quite plausible she would need to sleep.

Verdict: Not just a dream.

Could a brain survive for 300 years?

Even while you sleep, your brain still needs a constant supply of oxygen. Brain damage from a lack of oxygen starts becoming irreparable after about 20 minutes without it, although with noted exceptions.

Brains can be temporarily put into a state of suspended animation by cooling them down dramatically, and operations like heart transplants are sometimes done this way today.

But keeping the brain cold also requires power, and a brain can only currently be kept alive like this for a few hours, not the 300 years portrayed in the movie.

The future of humans - cyborgs

Alita: Battle Angel presents a world full of cyborgs with varying remnants of their humanity (both physical and mental). Whether this is a realistic potential future is still up for debate - we don’t know whether this ongoing hybridisation of humans and technology will be sustained or will rapidly switch completely over to robotics technology.

Read more: Why visual illusions appear in everyday objects – from nature to architecture

But if we are to have a future of cyborgs, the movie presents (sometimes realistically) a range of concepts that are fascinating to consider: will these cyborgs still need to eat, to sleep, and how will a mixed society of humans and cyborgs function.

Alita: Battle Angel is a vision of one such possible future, and is a worthy addition to the canon of films that provoke us to think about just what our world of tomorrow will look like. 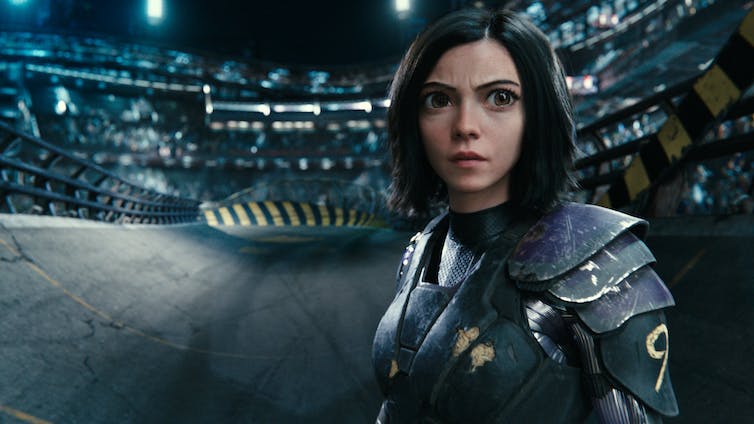 Alita: Battle Angel prompts us to consider what exactly our machine and technology-filled future may look like. 20th Century Fox