Strangely enough, there’s a link between “Kevin07” as an electoral phenomenon and the recent successes of independents such as Kerryn Phelps (Wentworth), Cathy McGowan (Indi), and Rebekha Sharkie (Mayo). All three now hold once safe Coalition seats.

And the link is one that may prove influential in 2019, particularly for Zali Steggall, who is challenging Tony Abbott in Warringah.

As in the case of Kevin07, the formerly Coalition-friendly independents, which is also how Steggall positions herself, found a way of giving life-long centre-right voters permission to break ranks without feeling like they were being disloyal.

The trick is to present as essentially similar to the incumbent conservative, but better. Modernised. Updated.

The implicit message to voters was that it was their party that had left them, not the other way around.

Such a sentiment may be ripe for expression in Warringah which, while economically conservative, has emerged as demonstrably more progressive than its long-time MP, Abbott. The blue-ribbon jewel was among the most pro-equality electorates in the country in the 2017 postal survey.

Beaten only by Wentworth, the two inner-Sydney electorates were the leading Liberal-held “yes” seats in NSW.

And it is to these voters that new and fresh quasi-independent candidates like Steggall seek to speak – voters whose Liberal loyalties have been tested by Abbott’s blunt antipathy for social reform and particularly his denial of tough Australian action against global warming.

The trick is to be close, but not the same, and it has a record of working in conservative-minded electorates.

Underpinning Kevin Rudd’s defeat of John Howard in 2007 was a carefully calibrated reassurance that Howard’s Australia – in which political correctness had been demonised and social reform moved at a glacial pace – would continue even with a change to a Labor government.

Labor’s plan was to strip the election of the usual contrast between parties, reducing the choice before voters to John Howard or a kind of John Howard 2.0. 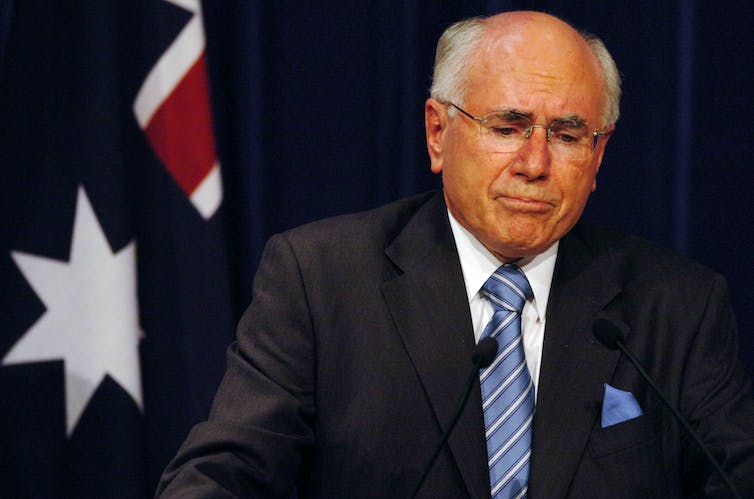 Howard lost in 2007, in part because Rudd positioned himself as a safe alternative. DEAN LEWINS/AAP

In a number of ways, Rudd presented as a prime ministerial simulacrum, updated but only where required to: prioritise “working families”, take faster action on climate change, and offer an exciting public investment bridge to the digital future (the NBN).

So successful was this unusual proposition, it tended to minimise other policy differences between the parties and neutralise the usual fear of change itself among cautious voters.

From a marketing perspective, it was daring given Rudd was in fact the leader of the opposing Labor Party.

Crucially, it sought simultaneously to share in the government’s credit for economic stewardship – moderate inflation, strong employment, and a healthy budget surplus again – while outflanking Howard on his right.

Of course there was more to the 2007 changeover than mere campaigning, not least being Howard’s odious industrial relations laws (WorkChoices), an inconvenient mid-campaign cash rate hike (to 6.75%), and simple fatigue after a dozen years of Coalition rule.

Even so, there’s no denying that with his lay-preacher persona, non-union background, and claim to be fiscally conservative, Rudd deftly positioned himself as the safe choice for those voters considering change but still concerned with budget discipline and creeping permissiveness.

Similar to Labor’s 2007 strategy, Phelps, McGowan and Sharkie have offered the tribally conservative voter a reduced-risk alternative to the status quo. Or, as some have coined it, “continuity through change”.

But there are also key differences. While Rudd promised measured economic modernisation in a socially-conservative manifesto - opposing same-sex marriage, for example - the new breed of once-were-Liberals flip that around.

They tend to emphasise the low tax, pro-business instincts of conservatives, but are more left-leaning on social policy and the environment. This turns out to reflect much of the electorate also – including many Liberal voters.

Can Steggall do the same in Warringah?

It’s a formula with a particular piquancy now given 2019 marks ten years since Tony Abbott rolled Malcolm Turnbull for the Liberal leadership over emissions trading.

An acrimonious decade on, and with no government climate or energy policy to speak of, voters’ patience has been strained to breaking point. The endless point-scoring and division has nudged moderately inclined Liberals within the grasp of new independents. 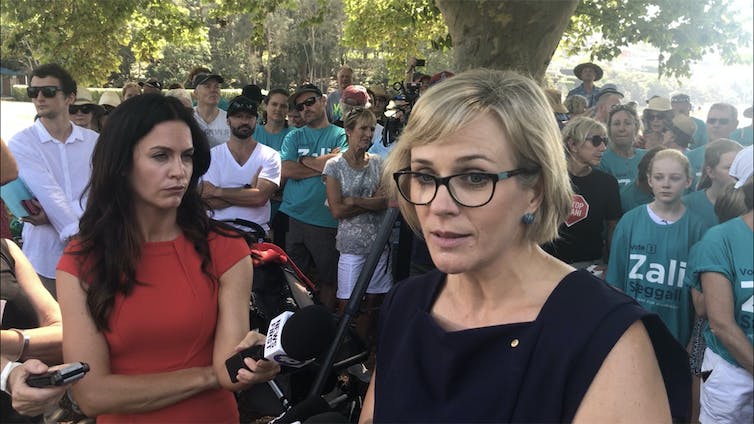 Fittingly, these events are coming to a head most threateningly for the government in Abbott’s own stronghold of Warringah.

Abbott’s vulnerability turns on three things: the standing of the Morrison government come polling day (which may or may not have improved), the campaign prowess of the Steggall operation (unknown), and the extent of declining loyalty by once solid supporters in his electorate. All are in flux.

Steggall’s threshold objective must be to drive Abbott’s primary vote south of 45%. That will not be easy. In 2016, his primary vote tanked by some 9% but he still managed to hold the seat without need for second preferences at 51.65%.

It could also resonate strongly with Liberal backers who were appalled at Abbott’s starring, if roundly ineffective, campaign against marriage equality.

Despite its unwavering support for Abbott through nine elections, Warringah voted “yes” to legalising same-sex marriage at the rate of 75% compared to the national rate of 62%. It even exceeded support in the most progressive jurisdiction – the ACT.

Steggall’s backers believe Abbott’s famous resistance to a reform his constituents found uncontroversial will prove it is his failure to move with the times that will force them to move their votes.