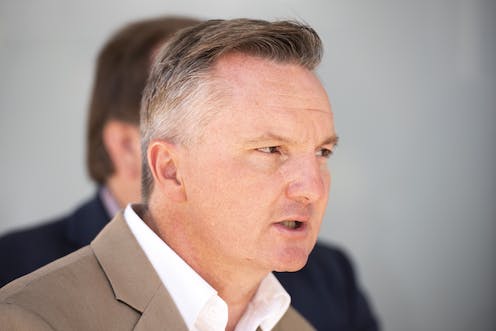 Shadow treasurer Chris Bowen will pitch to workers’ discontents when he declares in his first economic speech of the year that they are being denied “a fair go”.

“Under the Liberals, the economy is not working for working people,” Bowen will say, delivering the Chifley Oration in Melbourne on Monday.

He will argue that growth is too low, more than a million people are under-employed, and “far too many” workers are underpaid.

“Too many Australians are being pushed to the margins, ignored by the Liberals in the suburbs, let down by the Nationals in the regions. Squeezed out of the middle class, cut-off from the fair go, denied the chance to fulfil their potential.

Labor’s pitch to frame the economic debate is in contrast to the government case, which is to emphasise the positives, especially jobs growth, while claiming the economy would weaken under a Shorten government.

The escalating debate over the economy comes as Bill Shorten on Sunday said Labor was “not for turning” on its proposed crackdown on cash refunds for franking credits, which threatens to cost the opposition a good number of votes among retirees.

“There is no principle that says it is fair that a non-taxpayer gets a tax refund, a cash tax refund,” Shorten told the ABC.

Pressed on whether he was saying there would be no tweaking of the policy, Shorten said: “If I can put it really directly, do people want a government or do they want a piece of plasticine?

"Do people want a government with tax principles and fairness at their core or do they just want a lump of political putty? We’ve had six years of the plasticine government and we are putting our views out because we want Australia to be fairer.”

In his address, an extract of which was released ahead of delivery, Bowen says the economy is not growing as broadly or strongly or fairly as it should and this is contributing to the “stagnating of living standards”.

“The last Labor government saw a 7.6% increase in living standards – despite the Global Financial Crisis.

"Over the same period, living standards have lifted by just 2.5% under the Liberals in much better international circumstances. Last quarter, they actually declined,” Bowen says.

“Australians are reminded of this every time they get paid, with wages growth at record lows.”

In the April 2 budget, last year’s budget wages forecast will be downgraded again, as happened in previous budgets, Bowen says. “In every single Hockey and Morrison budget, the wages growth forecasts have had to be downgraded”.

“As Bill has said so many times, everything is going up except people’s wages. Since the Liberals were elected electricity prices are up 15%; the cost of long day child care is up 24%; private health insurance premiums are up 30%.

"Prices racing ahead of wages means more and more families are dipping into their savings just to keep the show on the road,” Bowen says.

The household savings ratio has fallen to its lowest level in more than a decade, and household debt is the second highest in the OECD, he says.

Bowen also seeks to discredit the government’s argument on its employment record.

On unemployment, he says Australia is an underperformer compared to similar countries such as the United States, United Kingdom and New Zealand.

“But more concerning than the headline unemployment rate is the fact that it masks deep and persistent underemployment. There are 1.1 million under-employed people in Australia and another 666,700 who are unemployed, meaning there are 1.8 million Australians who want more work”.

Bowen says his first budget would, as well as investing more in schools, hospitals and essential services, “also contain bigger, fairer tax cuts for 10 million working Australians who earn up to $125,000.

"These bigger and fairer tax cuts will give a much needed shot in the arm to consumption while our better tax offering to all businesses, particularly our Australian Investment Guarantee will encourage much needed investment and get productivity going again”.

The opposition is releasing a booklet titled “The true state of the economy under the Liberals”.