This is a long read. Enjoy!

More towers at Sydney’s Darling Harbour are among redevelopment plans for the inner city waterfront precinct and this has prompted recent debate.

Plans open for public commentary include proposals for new tall buildings at Cockle Bay and at the Harbourside Shopping Centre.

Critics include Russell Hand and Christopher Ashworth, senior planners at the City of Sydney, who have lodged formal objections.

Alex Greenwich, independent MP for Sydney, describes the Cockle Bay proposal as “very poor planning”. In the same article, Graham Quint of the National Trust says Darling Harbour would be “degraded” by overdevelopment.

Celebrated architect Philip Cox fears the area has “gone backwards” as it does not really create a unique urban space, nor does it contribute much to the city.

Plans for ever larger buildings, bringing in more people and attracting more tourists may mark a point of no return for the precinct. It would place increased pressure on the available space, which already houses a town full of people.

More development of the type proposed also leaves little space to regenerate the city, to create places where nature and open space can help to deal with floods or heat, let alone create a valuable ecological landscape.

Three examples highlight how development of the Darling Harbour area over the past 30 years has been botched.

1. Darling Harbour as a noisy neighbour

Walk down Darling Harbour towards Barangaroo on a random night and this is what you’ll face.

Noisy bars and restaurants along Cockle Bay are full; quieter places inside are, even for Sydney’s standards, expensive; bright lights compare with the neon of Shanghai’s Nanjing Road; and there is activity everywhere, even on the water where party boats disturb not only human but also animal life.

I am not against a lively precinct. But Darling Harbour is currently operating like your noisy neighbour — a nice guy but with too many bad habits. He eats too much, burps whenever it is convenient, grows fat and watches the same programs every day.

There it is, consuming tourists (4.6 million in the year ending March 2018), growing bigger buildings all around, producing noises no-one wants to hear, and looking like a huge TV screen flickering flashy lights into the night.

Read more: Will a casino be a boon or a bane for Barangaroo?

Barangaroo is the next stage of “badnertainment”, adding more expensive drinking and eating venues, increasing traffic congestion, and continuing the gambling boulevard all the way through to Headland Park. Compared to the former port facilities that stood there, at least people can enter this space up to the water’s edge.

But Barangaroo remains a private collection of colossal buildings, impenetrable if you don’t belong to the corporate world.

2. Tumbalong Park, hidden behind a highway

Tumbalong Park is hidden behind a highway, so far back no one can see the water. Though there are paths, plants and a stage, the overkill of lights and noise is not what you’d expect from a park.

Read more: Our cities need more trees, but that means being prepared to cut some down

Anyone who wants to spend time there on a hot day will experience the “heat island effect”. Here, heat is amplified compared with the surrounding area as the grass is surrounded by large chunks of concrete and glass. That, combined with a feeling of being observed from all sides, might explain why you hardly find people sitting on the grass.

Where do people plan a highway through a public space? In Sydney, this is quite normal. The Western Distributor splits the City from Circular Quay and Darling Harbour. A spaghetti of ramps, concrete traffic lanes and multilayered traffic disconnects surrounding areas including Ultimo and Haymarket from the real beauty: the water and water’s edge of Cockle Bay. What could be a coherent urban precinct is cut in half and displaces the urban front from the water’s edge.

These three failings form an urban sink hole for Sydney’s residents — a gap in which tourists are trapped and the corporates show off. Through traffic and congestion dominate the area.

Darling Harbour is full of bling, the park is boring, and the highway is a barrier. Sydney created a blinging, boring barrier.

Read more: If planners understand it's cool to green cities, what's stopping them?

Why can’t Darling Harbour and Cockle Bay be a sensitive space, where you can experience relative darkness and silence when eating and drinking, and you can enjoy the tranquility of dark water so close to the city centre?

Wouldn’t it be sensational if you could whisper a secret message to your darling instead of shouting how his or her working day was? Wouldn’t it be great if you could sit on the edge of the harbour, dangling your tired feet in the water? How great could it be if the space was green with trees, bush, ecofriendly river edges, where kids could explore water and nature?

Tranquility, darkness and human scale are the ingredients for an environment that can be completely green and still urban. Higher densities are possible as long as these are sustainable, we use environmental-friendly materials and are placed in a larger green and ecological zone fronting the water. This then creates the space for people to enjoy the environment and relax.

This is urgent. Climate change will cause and enforce changes to city centres, especially when they’re fronting water edges, like Darling Harbour.

Rising sea levels (up to 2m by the end of the century), and more flash flooding as a result of more intense rain are expected.

So green buffer zones on either side of the water’s edge are required to deal with rising water levels and more intense rain events.

Environments must be flexible, adaptive and resilient to survive. The types of activities currently in the Darling Harbour area are mono-functional, inflexible and vulnerable to climate impacts.

Here’s what we can learn from other cities

Toronto’s city centre has a series of greening projects along its waterfront. These include nature reserves, a bicycle path, sandy beach-like areas and zones in which urban water is purified at the same time made available for the public to use in playgrounds. 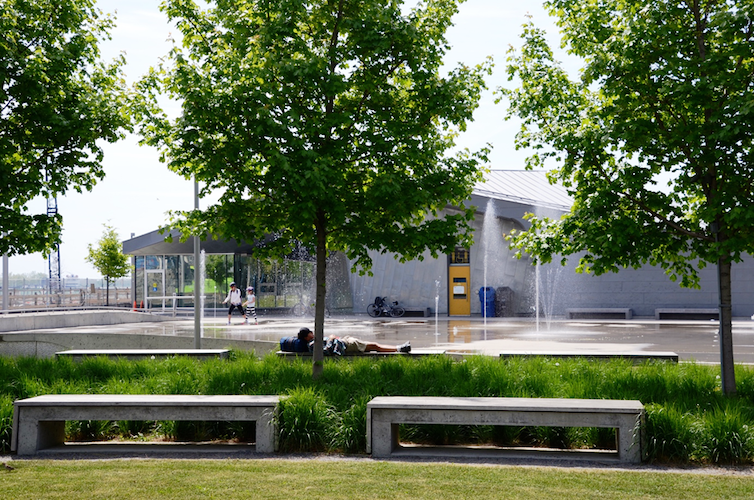 Another good example is in New York, where Manhattan is transforming its Hudson River edges with parks and green areas. There is open-air office space such as the Hudson Yards, and continuous parks along the river, such as the Riverpark Boulevard.

These continuous parks can not only protect the city from flooding but also suit the daily needs of the jogging, cycling or wandering New Yorker. 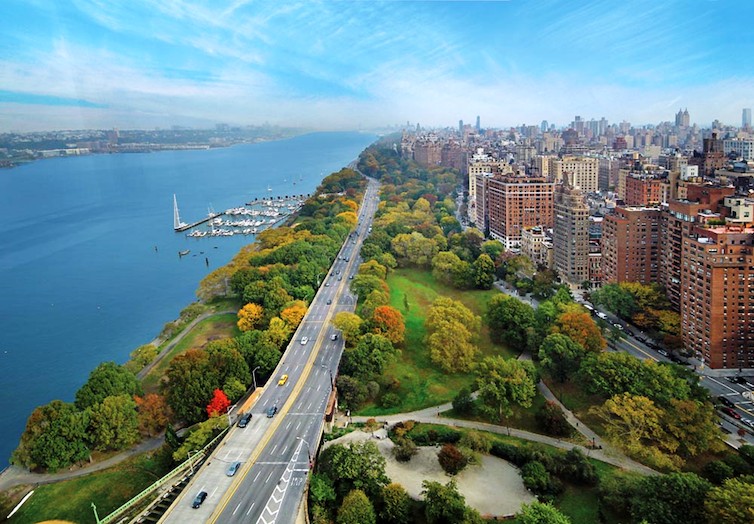 New York’s Riverpark Boulevard has been designed to protect the city from flooding, as well as providing people place to walk, jog or wander. Author provided

In Shanghai there’s a large program to green the river edge. Over 100,000 trees are being planted along the Huangpu River. This program is meant to clean the air, mitigate the urban heat island effect and offer space to occasional floods. But it also functions as an enormous park, with a continuous cycle-path and the option to run the marathon (once up and down). 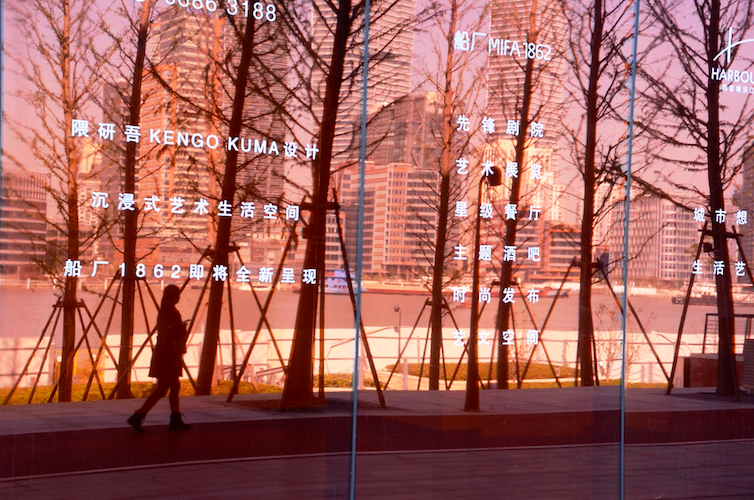 Shanghai is transforming its riverside with more than 100,000 trees and parklands long enough to run a marathon. Author provided

Finally, Amsterdam is redeveloping the northern shore of the IJ river. Here, new green spaces, water purification and ecological reserves are realised in the midst of a high-density mixed-use urban environment. One of the eye-catchers is EYE, the national movie theatre. 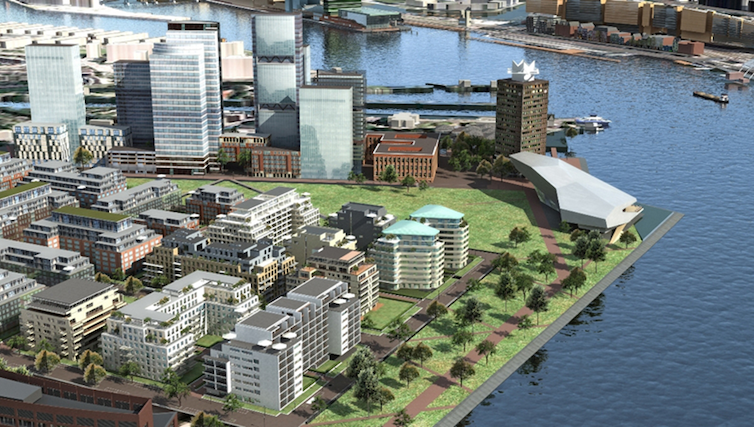 Sydney, it’s up to you

These examples show that large, western cities are successfully implementing sustainable ecological developments along their waterfronts.

These are not realised because of some high-level green ambition, but out of pure necessity. People ask for cleaner environments so they can enjoy, exercise and play with their kids in a healthy and safe place.

In Darling Harbour, we’re faced with short-term economic benefits, with a focus on tourists, and a vulnerable waterline. Is this the long-term future for Sydneysiders?