In a new series, we look at under acknowledged women through the ages.

Anne-Josèphe Théroigne or Terwagne (1762–1817) was born at Marcourt, a village south of Liège in modern Belgium. From a comfortable farming family, Théroigne had a remarkably unsettled life after her mother died when she was five years old, living with relatives who provided only erratic access to education. While working as a governess she lived and studied singing in London and Paris, but also survived through unhappy relationships with far older, wealthy men. 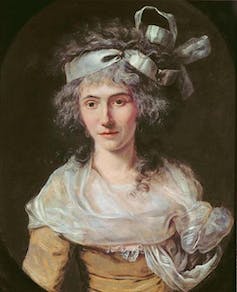 By 1789 she was living in Rome, from where she rushed back to Paris after news arrived of a revolution that immediately inspired her with its promise of individual freedoms and civic equality.

This frail and often hated woman became a passionate advocate of a woman’s place in a democratic society before a tragic episode broke her.

Much of her life is shrouded in silence and myth. While commonly assumed to have fought at the Bastille on July 14 1789 and to have led the famous march of market women from Paris to the court at Versailles in October dressed as a man or on horseback, it seems instead that she lived at Versailles throughout the summer of 1789, attending debates at the National Assembly and meeting leading political figures.

She returned to Paris with the Assembly in October and began speaking at the democratic club des Cordeliers and on the terraces outside the Assembly. She supported the formation of mixed-sex and women’s patriotic clubs and, with other individuals such as Olympe de Gouges, the Dutch activist Etta Palm d’Aelders and the Marquis de Condorcet, an expansion of women’s civic rights. 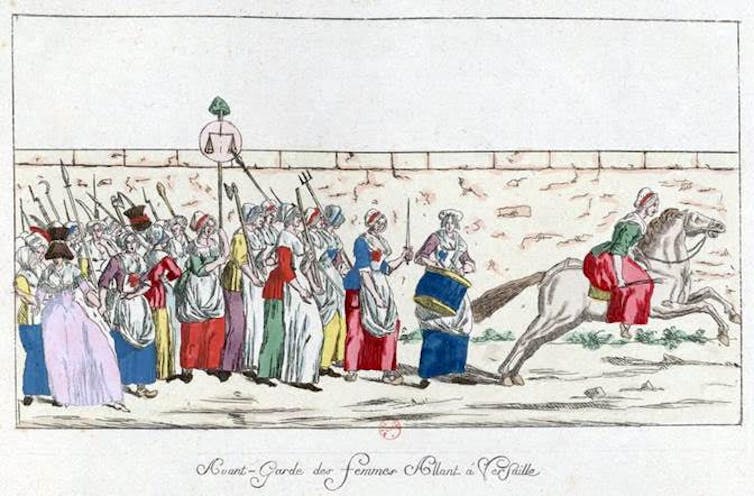 Anon., Advance Guard of Women going to Versailles, October 1789, illustrating belief in the myth of Théroigne’s presence on a white charger. Wikimedia Commons

While the word “feminism” was not used until 1837, there is no doubt about its applicability to Théroigne, who argued women,

have the same natural rights as men, so that, as a consequence, it is supremely unjust that we have not the same rights in society.

Théroigne’s outspoken presence and discourse provoked the ire of the counter-revolutionary press, in which she was the subject of vituperative mockery and allegations. She was ridiculed as a debauchee, the antithesis of femininity, a “patriots’ whore” whose 100 lovers a day each paid 100 sous in contributions to the Revolution “gained by the sweat of my body”. 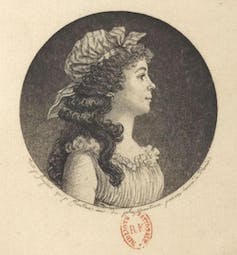 It was about this time that “de Méricourt” was added to her name in the press, an inference of noble background alluding to her birthplace which she did not repudiate, a politically unwise step at a time when noble titles and privileges were being abolished.

In May 1790, Théroigne returned to Marcourt and Liège, where she was arrested on the orders of the Austrian Government, anxious about the possible contagion of revolutionary ideas across the border, and interrogated about her revolutionary activities. By the time of her release and return to Paris in January 1792 she was impoverished and suffering from depression, insomnia, and other ailments.

“La belle Liégoise”, as she was dubbed, was welcomed back enthusiastically and, once France went to war with Austria in April she began campaigning, unsuccessfully, for women’s rights to bear arms:

Frenchwomen … let us raise ourselves to the height of our destinies; let us break our chains! At last the time is ripe for women to emerge from their shameful nullity, where the ignorance, pride and injustice of men had kept them enslaved for so long …!

During the insurrection on August 10, which overthrew the monarchy and created the republic, Théroigne was involved with the killing of royalists and awarded a “civic crown” for her courage. But her sartorial flair – she enjoyed wearing her white riding habit and large round hat in public – and her political choices made her unpopular with women of the people.

As the military position of the republic became more precarious, and the economy worsened, Paris and France became violently divided. Paris itself was a militant republican Jacobin city, but Théroigne preferred the more conservative Girondins. In vain she wrote a passionate pamphlet urging the election of women representatives with “the glorious ministry of uniting the citizens and of inculcating in them the respect for freedom of opinions”. 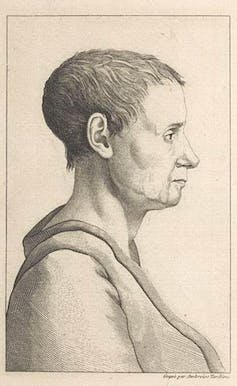 Théroigne de Méricourt, Marcellin Pellet, sketch done at the Salpêtrière Hospital in 1816, on the request of Etienne Esquirol. Wikimedia Commons

On May 15 1793, she was attacked by a group of Jacobin women outside the doors of the National Convention. The women, objecting to her pro-Girondin sentiments, lifted her dress and whipped her bared flesh.

Théroigne never fully recovered mentally or physically, and on 20 September 1794 she was certified insane and put into an asylum. It was a time when the first “scientific” diagnoses were being made of “dementia”, but the physical surrounds were medieval. She was ultimately sent to La Salpêtrière Hospital in 1807, where she lived in terrible squalor for ten years, only intermittently lucid and speaking constantly about the Revolution.

There the “alienist” (as psychiatrists were then called) Étienne Esquirol used her as a case-study of the mental illness caused by revolutionary “excess”. Following a short illness, she died there on 9 June 1817.

See Théroigne, by blood and fire enraged,Hounding a shoeless rabble to the fray,Who plays herself on a flaming stage,As she climbs, sword in hand, the royal stairway.

She appears as a character in Hilary Mantel’s 1992 major novel about the Revolution, A Place of Greater Safety and in the video game Assassin’s Creed Unity (2014) 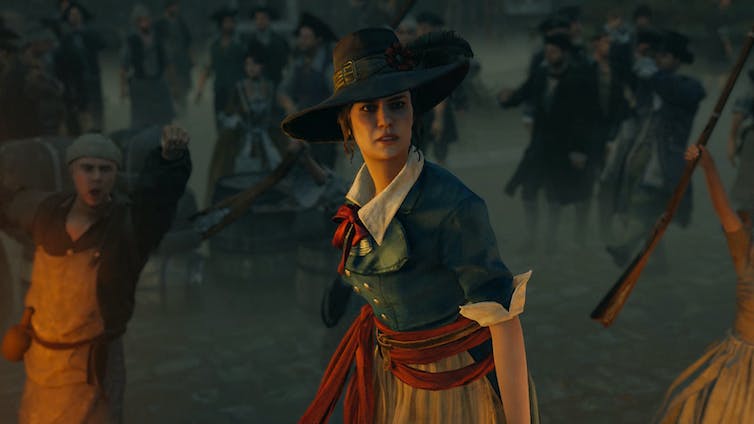 She has especially interested male writers fascinated by the links they imagine between women, madness and revolution. Indeed, in 1989 Simon Schama closed his best-selling Citizens with Théroigne’s sad incarceration as its epilogue, as if to imply that revolution drives women to feminism and madness.

The same year, this male fascination was explored by the Lacanian psychoanalyst Élisabeth Roudinesco, who brilliantly exposed the links between early feminism, the birth of the modern asylum and masculine phantasms.

Whereas the English title of her biography is Madness and Revolution, in French it was Une femme mélancolique: for Roudinesco, Théroigne was not mad in 1794, rather she was in mourning for the revolution she had lost.