We have just concluded four years of commemoration of the centenary of the first world war and, although the guns fell silent in November 1918, by Christmas many Australians were still separated from their loved ones.

For Australians serving overseas in WWI, celebrations such as Christmas were particularly difficult, a reminder that the war had laid waste to their routines and taken them away from their families.

We can see from historical documents that every effort was made to reproduce the form and content of a traditional Christmas meal, whether that be on board a ship, in the mess or even in the trenches

Maintaining the traditions of Christmas could be logistically difficult. It was often simply a slightly larger amount of food than the normal rations, with additional treats, such as the half pound of Christmas pudding that Major-General John Monash procured for every man in his Third Division in 1917. Alcohol was a welcome addition. 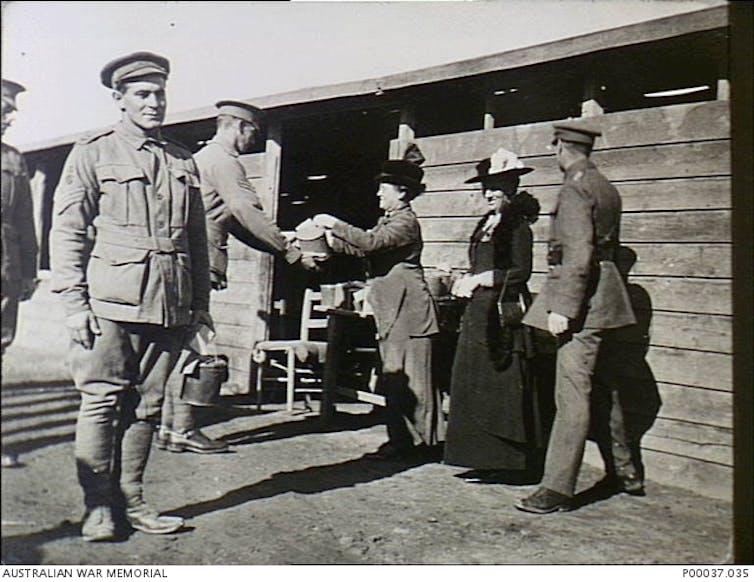 Christmas hampers and billies sent from home provided particular joy to those lucky enough to receive them. Some, however, experienced Christmas dinners like that of Private John Chugg of 1st Light Horse Field Ambulance, who complained “it was a miserable Xmas” in Egypt in 1914: “boiled beef unpeeled potatoes and tea without milk… [and] no mail or anything to cheer us”.

Sapper Alfred Galbraith described Christmas day in Ismailia Camp, Egypt, in December 1915 in a letter to his family. Each man chipped in to purchase a turkey and

chickens more like humming birds, soft drinks and a few biscuits. The chickens were dealt out 1 between 5 men and some of them would not feed one let alone 5 men, the one we got we tossed up to see who would get it & I won but I half it with my pal & then the two of us went & bought some […] biscuits & some tin fruit.

Alf is depicted in a photo of the dinner, sitting awkwardly on canvas at the end of a row of soldiers, mess tins in front of each and an occasional bottle, likely of beer. Alf’s Christmas letter concludes nostalgically “Dear Australia the land of my Birth which we will all be glad to see again … it will be a glorious day if I live to see it out … ” It was to be his last Christmas. 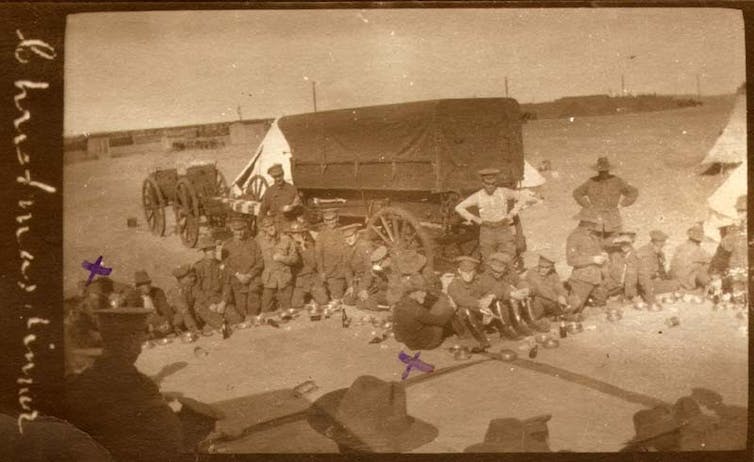 A special meal could have the effect of making the war recede, if briefly, for the soldiers who partook of it. This is the impression gleaned from the menu for the 1917 Christmas dinner at the “A” Mess of the 3rd Australian Divisional Headquarters in France, led by Monash.

The hand-drawn menu features bucolic sketches of rural French life, and a list of dishes in a mix of French and English, signalling the prestige of the officers’ dinner. 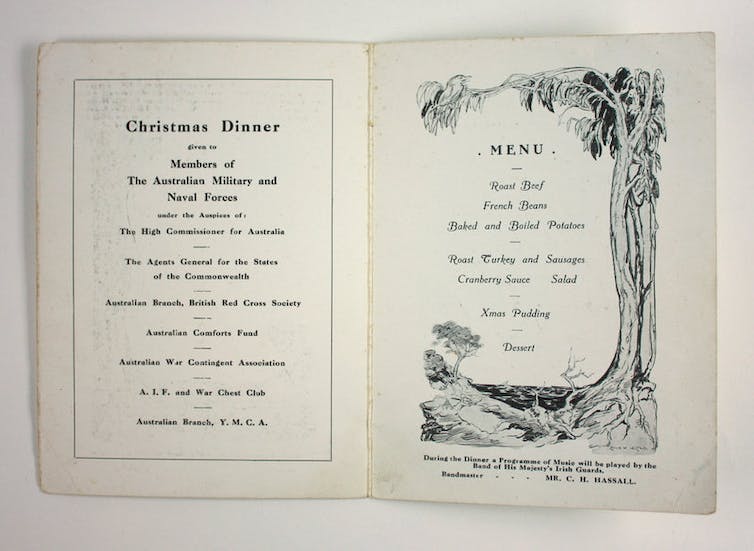 The menu served at an AIF Christmas Dinner in 1916. Museums Victoria collection, donated by Jean Bourke

The “B” Mess dinner at the Headquarters was almost as sumptuous, but with fewer courses. Its more simple menu included a humorous script, poetry and parodies. When the food concluded a toast was made to “Absent Ones”, drunk “while softly murmuring the words ‘Not lost but gone to CORPS’”. Notably, the term “Lest We Forget” was used to remind diners of good etiquette!

The voyage to active overseas service was a mixture of excitement, trepidation and monotony. Food service broke the boredom of long days at sea. On board the SS Suffolk on Christmas day 1915 diners were treated to a multi-course dinner, opening with olives, mock turtle soup and salmon cutlets in anchovy sauce. The next course featured iced asparagus, beef fillets with mushrooms and prawns in aspic, before the food became even more serious, with four types of meat, baked and boiled potatoes, and beans. 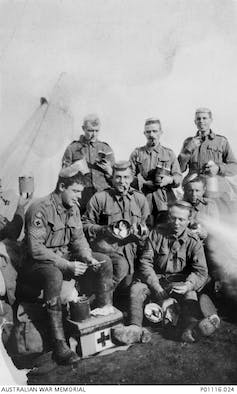 Members of the 4th Australian Field Ambulance at Christmas in Lemnos in 1915. Australian War Memorial

Four deserts followed, including plum pudding with both hard and brandy sauces. Like many special occasion menus of the war, diners signed their names on the back.

The desire to be “home by Christmas” had been widely expressed from the very first year of the Great War, yet when the armistice finally came in 1918, Australians on active service still had a long journey ahead of them and faced another Christmas away from home.

In 1918, the 2nd Australian pioneers officers’ Christmas dinner took place “somewhere in France”, featuring a menu entirely in French save for the words “plum pudding” and “God Save the King”. Two half pages of the menu were dedicated to “Autographs”.

The souvenir menu card from the 13th Australian Field Ambulance 2nd anniversary dinner, held on Christmas Day 1918 in the Palace of Justice, Dinant-Sur-Meuse, Belgium likewise has a page for autographs. The festive menu features an extensive list of desserts. 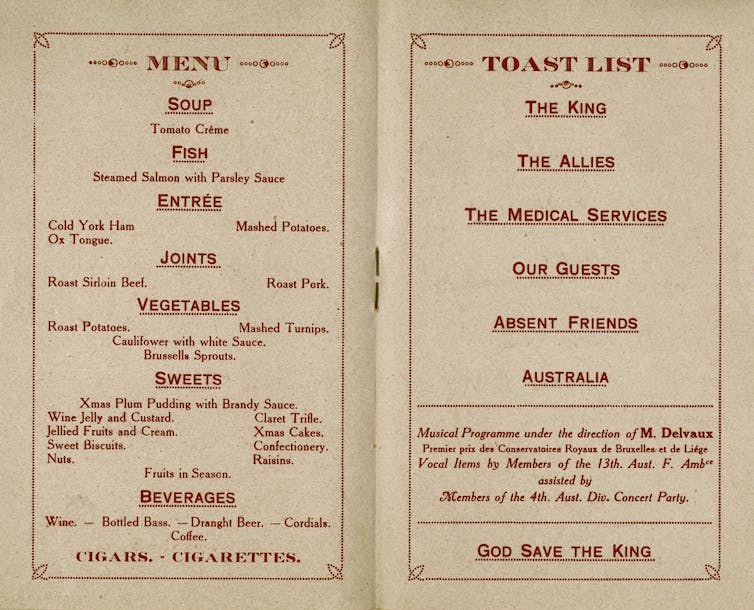 Christmas dinner in 1919 saw Australians who had served in Europe returning home on the SS Königin Luise, a German ship allocated to Britain as part of war reparations. A menu saved by Sergeant Tom Robinson Lydster bears no references to the war.

A wreath of holly frames an eclectic menu including “Fillet of Sole au Vin Blanc, Asperges au Beurre Fondu” but also “Lamb cutlets, Tomato sauce, Roast Sirlion of Beef”. The Christmas element is provided by “Plum Pudding, Brandy Sauce, Mince Pies”. More than a year after the end of the war, some surviving Australians were yet to celebrate Christmas on home soil.

Christmas traditions for Australian soldiers, nurses and medics helped maintain cultural normalcy during overseas service. Yet Christmas on active service could be a time of significant stress, a reminder of loved ones far away and of fallen friends. Unfortunately, for those who returned to Australia, forever changed by their experiences, Christmas was not always what they remembered or had imagined.