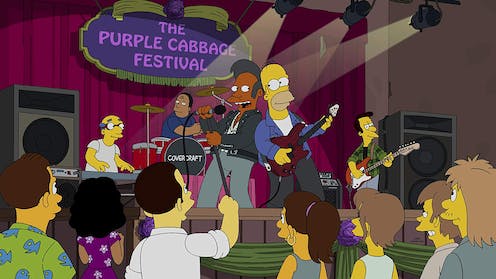 After 28 years on screen, the controversial character of Apu is set to be written out of The Simpsons. 20th Century Fox

This piece is part of a series on race and racism in Australia. The series examines this complex and incendiary topic, and the role it plays in contemporary Australia. You can read the rest of the series here and here.

This piece is part of a series on race and racism in Australia. The series examines this complex and incendiary topic, and the role it plays in contemporary Australia. You can read the rest of the series here and here.

While giving a talk at a community arts organisation in Parramatta on why the stories of diverse areas like Western Sydney are not seen on mainstream screens, I was introduced to a screenwriter who had formerly worked for one of Australia’s longest-running soaps, Home and Away.

His take was that having studied post-colonial theory as a white person in the 1990s, he was hesitant to write stories based on experiences and cultures other than his own. Another prominent producer on the panel declared that he never thought about diversity when deciding what stories to invest in.

These perspectives – avoidance for fear of offending and a colour-blind disregard for diversity, respectively – are emblematic of our faltering progress on the issue of media diversity. Most recently, the issue has been in the spotlight due to reports that the controversial character of Apu is going to be written out of the iconic animated sitcom, The Simpsons.

Read more: Goodbye Apu -- here's what you meant to us

The problem with Apu

The fact that the Apu issue has made international headlines speaks to not only the wide appeal of The Simpsons, but also the grief this characterisation has caused viewers of South Asian origin over the years.

In his 2017 documentary The Problem with Apu, Indian-American comedian Hari Kondabolu explored how this prime-time stereotyping has been a source of racial micro-aggressions and slurs, even for Simpsons’ fans who appreciate the bent rules of comedy.

The controversy surrounding Apu is not a case of taking offence at a benign joke. Research has shown that being exposed to certain comedic devices and conventions over the long term naturalises racial stereotypes and differences for audiences of all backgrounds.

The characterisation of Apu has real implications for the lives of people of colour who bear the brunt of bullying based on the character, and for actors of South Asian origin who are only seen as authentic if they sound and act like they run a Kwik-E-Mart.

Kondabolu’s documentary recognises Apu as a form of “brownface”, where a white actor dons the exaggerated characteristics of another racial group. Turning characters into caricatures, this practice perpetuates demeaning stereotypes and distances the viewer from the characters in question.

A non-Indian actor (Hank Azaria) voicing Apu in a thick, exaggerated accent may not have been out of place in 1990. However, a growing awareness of the potentially harmful repercussions of such characterisations means that it is no longer so.

Apu is characterised by an exaggerated Indian accent and his stories often draw on racial stereotypes.

So what are the alternatives for maintaining the essence of good comedy while portraying non-white communities in a substantive and ethical manner?

The need for stories created by people of colour

Since 2016, I have been working on an Australia Research Council-funded Linkage project that examines the parallel histories of migration and television in Australia. Through interviews with creators of “diverse” content, it has become evident that comedy is often a lightning rod for broader conversations about racial stereotyping. For people of colour, it can serve as a specific narrative tool to help them create their own authentic stories.

Part of comedy’s draw is its ability to comment on current cultural and social issues in an often more engaging way than the traditional news media. In the context of racial representation, comedy can be used as a hook to engage audiences who might not otherwise watch a show explicitly about race.

Ben Law, the writer of SBS’s The Family Law (a comedy centred around a Chinese-Australian family), addressed this in my interview with him:

We want to make a show that is as dramatically hefty as it is funny… We are writing it as a comedy to invite people in.

By drawing in people from a range of class and ethnic backgrounds, comedy can explore complex issues of difference with nuance and without reverting to stereotypes.

Besides audience engagement, comedy is a powerful medium for people of colour to tell their own stories on their own terms. Kondabolu has referred to stand-up routines as “direct to consumer, farm to table”. The genre allows those previously underrepresented and misrepresented to set their own agendas and create their own narratives, rather than waiting for mainstream institutions and their decision-makers to change.

However, we must be wary of letting comedy created by people of colour get shunted to the side as a subcategory of the genre. Rob Shehadie, who has a long career in “wog comedy” in Australia, told me these labels can make the stories seem less accessible to people who don’t identify with specific ethnic backgrounds.

Read more: Fresh Off the Boat and the rise of niche TV

This speaks to why media created by people of colour need to be seen as within the mainstream, in line with an evolving and multicultural Australian identity. Comedy is a touchstone for how immigrant nations creatively mediate belonging.

So what do we do about Apu?

An episode of The Simpsons earlier this year responded to Kondabolu’s documentary by simplistically implying that political correctness is antithetical to good storytelling.

The Simpsons’ response to the Apu controversy.

However, if the success of stories with diverse casts is anything to go by, good storytelling is also a matter of taking the pulse of the current socio-political context and creating content to match.

Comedy is often most incisive when it reflects the time and place it is situated in. Looking at The Simpsons’ declining ratings over the years, we may draw the conclusion that this has happened because other animated sitcoms are better keeping up with the times.

In response to The Simpsons episode above, producer Adi Shanker crowdsourced a solution to the problem of Apu by inviting scripts that re-imagined the character and challenge stereotypes.

Headed by people of colour, projects that critically engage with the complicated history of the character represent a potential way forward. A better way forward, in fact, than cutting off discussion by discarding the offensive subject in question altogether. The time now is ripe to re-write and re-voice Apu.