The World Health Organisation (WHO) has officially declared that Australia has eliminated rubella.

Rubella, also known as German measles, is a contagious viral disease. The symptoms in children are generally mild – fever, rash and sore throat – but infection during pregnancy can be devastating for unborn babies.

Infection in the first trimester of pregnancy results in an 80% chance of miscarriage or birth defects, known as congenital rubella syndrome (CRS), in the developing fetus.

Read more: Vaccines to expect when you're expecting, and why

In the 1940s, Australian ophthalmologist Sir Norman McAlister Gregg was the first to describe the connection between rubella infection in mothers, and cataracts and other birth defects in babies.

This led to development of the rubella vaccine in the 1960s and the exciting possibility of eliminating the disease.

Before the rollout of rubella vaccination, large outbreaks were recorded. In 1963-64 there were more than 3,000 documented cases of rubella.

Our first vaccination program, introduced in 1971, only targeted schoolgirls, with the aim of preventing infection during pregnancy and the subsequent risk of CRS.

Sign up to Thrive, a weekly dose of evidence to help you live well. But because most infections occurred during childhood and males were not vaccinated, the rubella virus continued to circulate, causing outbreaks. By the early 1990s there were still an average of 4,000 cases a year. Achieving rubella elimination Elimination is defined as “reduction to zero of the incidence of infection caused by a specific agent in a defined geographical area”. This means there can be no ongoing (also known as endemic) circulation of the virus in that area. Australia was verified as having eliminated measles in 2014. We were able to “piggyback” our rubella elimination efforts onto those for measles by switching from the schoolgirl rubella program to a single-dose childhood measles-mumps-rubella vaccine (MMR) vaccine for both 12-month-old girls and boys in 1989. From 1993, a second dose was added to capture those who missed the first dose or who weren’t fully protected. 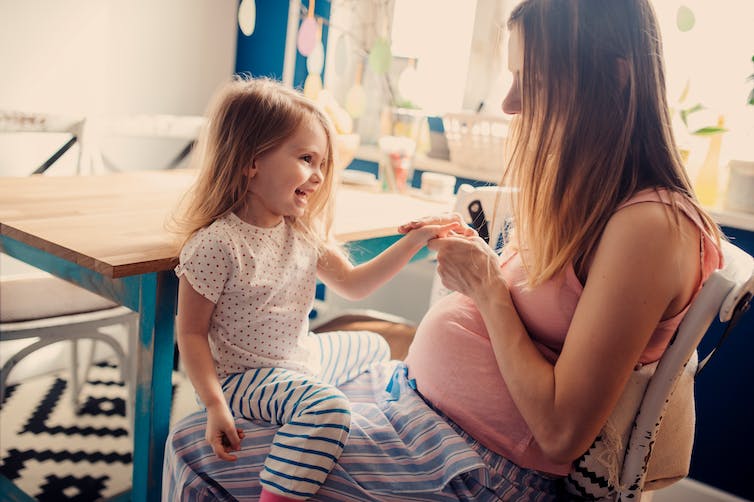 Rubella symptoms are often mild in children, but if contracted during pregnancy, can be very dangerous for the unborn baby. From shutterstock.com Australia made a concerted effort to boost its MMR vaccine coverage by conducting a mass school-based vaccination campaign in 1998. Since then, coverage has continued to climb, with more than 94% of infants now vaccinated with MMR. A recent study estimated that about 92% of one- to 49-year-olds were immune to rubella. The impact has been clear: in 2012-17 there were only four cases of CRS and fewer than 40 cases of rubella reported each year. This is a far cry from the thousands reported in the pre-vaccination era. Read more: Want to boost vaccination? Don't punish parents, build their trust Verification of Australia’s rubella elimination status As was required for measles, Australia had to submit a detailed report to the World Health Organisation, providing evidence that rubella had been eliminated. This included proof that most of the population is immune to rubella and that vaccine coverage is high. Showing low numbers of rubella and CRS cases was also important. This evidence is backed up by a surveillance system that is sensitive enough to pick up and respond to cases when they occur and to test whether the rubella virus strain was circulating locally or imported from overseas. In the past three years, the cases of rubella identified were strains from overseas, rather than from a virus spreading within in Australia. Elimination doesn’t mean eradication Eradication only occurs when all countries in the world have achieved elimination of a disease. The only human disease to have been eradicated is smallpox in 1979. The Americas region, and five countries within our region, have been verified as eliminating rubella and CRS. But it remains prevalent in many countries. Not all countries have introduced rubella vaccination. As of December 2016, just 152 of 194 countries had introduced vaccination. Even in some countries with vaccination programs, coverage is so low that large outbreaks are still occurring. In Japan, more than 1,100 cases have been reported this year. Read more: Want to boost vaccination? Don't punish parents, build their trust No room for complacency We need to maintain high coverage with our routine vaccination programs to ensure elimination is sustained, as rubella is still likely to be imported from other countries. Travellers should have had two MMR vaccinations before going overseas. And every effort must be made to ensure new arrivals in Australia are up to date with their vaccinations, especially women of child-bearing age. Finally, to eradicate rubella we need to support other countries in our region, and globally, to strengthen their control efforts.