Energy policy in Australia is a major failure. The federal government has been unable to forge an effective policy to ensure affordable, reliable and low-emissions electricity. It’s time for the states to step up.

Internationally, responsibility for climate change policies rests with national governments. The federal government says it remains committed to Australia’s target under the Paris Agreement, but it has abandoned the emissions-reduction obligation of the National Energy Guarantee (NEG). This leaves Australia’s electricity sector, which is responsible for 34% of our overall emissions, with no credible policy to reduce those emissions.

The states should fill this policy vacuum if it persists. They should work together on a nationwide emissions reduction scheme through state-based legislation, independent of the federal government. A Commonwealth-led national policy would be best, but a state-based policy is far better than none.

In October 2018 the COAG Energy Council agreed to continue work on the reliability element of the NEG. The states and territories should maintain this support and implement this policy with the Commonwealth government, and so support the reliability of the National Electricity Market during a challenging transition.

The Grattan Institute’s State Orange Book 2018 shows that there is also much the states can do to reduce energy prices. Consumers are understandably upset – household retail prices have increased by more than half in the past decade, according to the Australian Competition and Consumer Commission (see page 7 here). 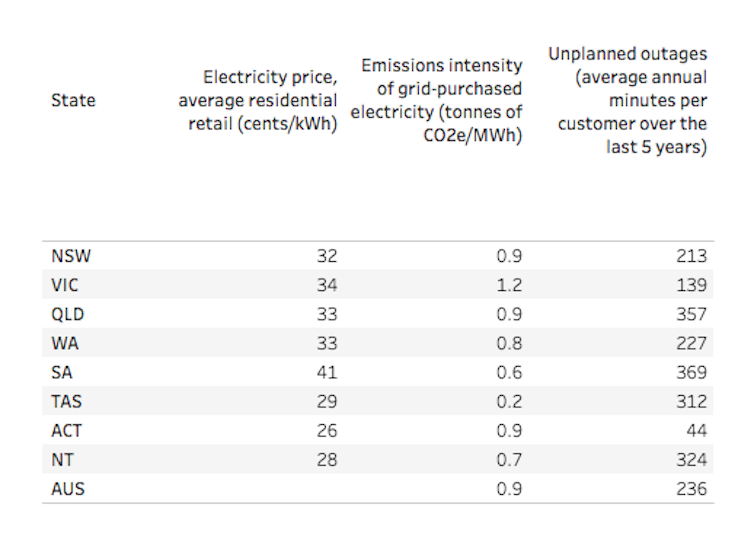 How your state measures up on energy. Grattan Institute State Orange Book 2018

The federal government is certainly focused on price – Prime Minister Scott Morrison has referred to Energy Minister Angus Taylor as the “minister for getting electricity prices down” – but many important pricing policies depend on state action.

Retail pricing is the obvious example. Poorly regulated retail electricity markets have not delivered for consumers. Retail margins are higher than would be expected in a truly competitive market. Many consumers find the market so complicated they give up trying to understand it.

However, governments should resist the temptation to use price caps as a quick fix. If set too low, price caps could reduce competition and drive longer-term price increases.

Western Australia, Tasmania and the Northern Territory, which have not yet adopted retail competition, should move in that direction – while learning from the mistakes of others.

Network costs make up the biggest share of the electricity bill for most households (see page 8 here) and some small businesses. This is particularly an issue in New South Wales, Queensland and Tasmania, where network values increased substantially under public ownership and those costs were passed on to consumers.

These states should write down the value of their overvalued networks or provide rebates to consumers, so the price of the networks is more closely aligned to the value they provide to consumers. Given the poor performance of publicly owned networks, any network businesses still in government hands should be privatised.

Responsibility for setting network reliability requirements should be transferred to the Australian Energy Regulator to prevent risk-averse state governments from imposing excessive reliability standards, which would drive up network costs again.

Read more: Amid blackout scare stories, remember that a grid without power cuts is impossible... and expensive

Until recently, it seemed state governments had learned the lessons from the bad old days of excessively generous subsidies for rooftop solar. That was until August 2018, when the Victorian government committed more than A$1 billion to pay half the cost of solar panels for eligible households and provide an interest-free loan for the remainder. Most of these systems would pay for themselves without subsidy. The Victorian government should abandon this waste of taxpayers’ money.

Finally, Australia’s gas market is adding to the price pain of homes and businesses. As international prices rise, there is no easy way to avoid some painful decisions. But some state policies are making matters worse.

The Victorian and Tasmanian governments’ moratoria on gas exploration and development constrain supply and drive up prices. The moratoria should be lifted. Instead, these states should give case-by-case approval to gas development projects, with safeguards against specific risks.

Australia needs reliable, affordable electricity to underpin our 21st-century economic prosperity. That must be protected while we also decarbonise the energy sector.

Energy market reform was at the forefront of national competition policy in the mid to late 1990s. But reform has since slowed, and the states are partly responsible. The states can rekindle the fire by pursuing a clear, nationally consistent action plan for affordable, reliable and low-emissions electricity.

Australia’s households and businesses – and the environment – are relying on the states to step up.