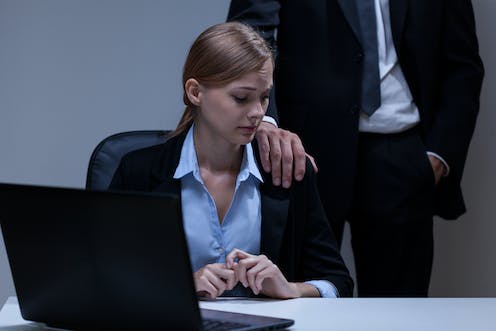 The recent report by the Human Rights Commission that 71% of people have been sexually harassed at some point in their lives raises the question of why there appears to be no effective legal remedy for such conduct in Australia.

In the age of the #MeToo and Time’s Up movements, we seem to be finally acknowledging and coming to terms with the extent of sexual harassment in society. So, why are offenders able to engage in such behaviour with impunity?

In Australia, the answer lies in part with the limited reach of sexual harassment laws and the time-consuming procedures involved in bringing complaints. Yet if we adopted into our law a doctrine that exists in legal systems based on Roman law, victims would have an easier way to obtain redress.

Read more: Sexual harassment is too much – and not enough – about sex

The Sex Discrimination Act of 1984 makes sexual harassment unlawful only in a narrow range of circumstances. These are in employment, education, and trading in public goods and services.

Furthermore, because the Human Rights Commission is not a court, it lacks the power to award damages in cases like these. So even if a victim makes a complaint to the HRC and engages in a time-consuming conciliation process, the perpetrator may still not agree to pay compensation. The only avenue for the plaintiff to recover damages then is to incur the expense of bringing a case to the Federal Circuit Court.

State and territory tribunals can award damages, but again only after going through a lengthy process of attempted conciliation. These procedures end up being a deterrent to plaintiffs, and a shield for perpetrators.

Sexual assault, “upskirting” and indecent exposure are criminal offences, but many other forms of harassment are not. A successful criminal prosecution also requires proof beyond reasonable doubt, and does not lead to financial compensation for the victim.

If anti-discrimination legislation and criminal law do not provide a remedy, what about suing for damages under the law of torts?

Unfortunately, our English-based common law system does not offer adequate protection against sexual harassment. One can recover damages for assault, but there are few remedies for harassment falling short of that.

A different approach under Roman law

Things are very different in legal systems based on Roman law. From its earliest codification in the Twelve Tables of 450BC, Roman law gave people a right to recover damages for personal injury.

The law expanded over the centuries to protect an increasingly wide range of personal rights by means of an action known as the actio injuriarum (or action for injuries). By the time of the publication of the Digest of Justinian in 533AD, the action protected three groups of rights: corpus (bodily integrity), fama (reputation), and dignitas (dignity).

This is where the major difference lies between our English-based law of torts and Roman law: although the law of torts allows a plaintiff to sue for bodily injury and defamation, it offers no protection for dignity and therefore no right to sue for verbal insult, no matter how offensive.

Read more: We need to do more about sexual harassment in the workplace

The actio injuriarum lives on in modern legal systems. A good example is South Africa, whose legal system is based on Roman law. There, the action has been used to recover damages for sexist verbal insults, unwelcome propositioning for sexual intercourse, and unwelcome exposure to pornography. The action also protects privacy, so it has been used to recover damages in cases involving peeping Toms, stalking, and the publication of intimate facts about people’s private lives.

Whether a plaintiff can recover damages depends on the application of a test of reasonableness. The leading case on the matter in South African law states:

This is an objective test. It requires the conduct complained of to be tested against the prevailing norms of society (ie. the current values and thinking of the community)… To address the words to another which might wound his self-esteem but which are not, objectively determined, insulting … cannot give rise to an action.

This test of reasonableness is no different from that applied by courts in Australia to determine whether the language used in defamation cases harms the reputation of the plaintiff.

How this could be work in Australia

Could such an action become part of Australian law? The answer is yes, because under the common law system the courts are free to develop tort law to meet new situations. The High Court has previously indicated that a tort of invasion of privacy might be developed in a suitable case.

There would therefore be nothing to prevent the courts from expanding the range of interests protected by the law to include personal dignity.

There are good reasons why that should be done. Our law protects defamation victims for two reasons – defamatory words affect what others think about the victim, and cause emotional harm due to the knowledge that their reputation has been harmed. So, if the plaintiff in a defamation action is awarded damages (at least in part) because they have experienced an affront, why shouldn’t the same be possible in a harassment case?

There will be cases in which it will be difficult to identify perpetrators. But that is an issue of evidence, not an argument against the principle that victims should be able to recover damages.

Read more: Women in rural workplaces struggle against the 'boys club' that leads to harassment

In any event, identification is not as problematic as one may think. Some perpetrators will be identified because incidents are witnessed by bystanders, as happened in a much-publicised incident in Paris when a woman rebuked her harasser for suggestive comments, and he retaliated by striking her.

Others will be traceable electronically when they engage in online harassment.

Sexual harassment has devastating psychological effects on its victims. The risk of financial liability undoubtedly has a modifying effect on human behaviour. While common decency does not act as a restraint on the conduct of harassers, the threat of being subject to the sting of monetary damages certainly will.