The clip above is English, more or less, as it was for the first half millennium of its existence. Although it sounds alien, the basic vocabulary is familiar. Except for the odd rune, like “þ” (which equals “th”), to read or say “Hwæt hæfst þu weorkes?” (literally, “what have you of work?”) isn’t too far from “What do you do for a job?”

Even footballers can do it; here’s ex-Saint Travis Fimmel (okay, sure, he never debuted) speaking Old English on the television series Vikings:

Read more: Guide to the classics: the Epic of Gilgamesh

More difficult than learning the language of the Anglo-Saxons is mastering the structure of their epic poetry. Take the translation of the lines you’ve just heard from Beowulf, the Old English poem celebrating the deeds of the eponymous hero, dating back more than a millennium. Not that everyday punters are out trying to learn Old English. But with vivid passages like this, maybe they should:

Spiralled into the clouds, the greatest death-fire, howled before the pyre. Heads melted, wound edges burst, then the blood gushed out; the body’s hate-bites. Flames swallowed all – the greediest guest – of those taken in the battle.

This passage is fragmented. The poet describes the action – spiralling and howling – before we have any idea what’s going on (as it happens, it’s a funeral). Then we get a smash-cut as the poet elaborates the image of fire as a greedy funeral guest at the funeral. For anyone used to reading modern texts, it’s dizzying.

But then consider a narrative more familiar to AFL fans, Fox Sports’ Adam Papalia calling Fremantle versus Collingwood in Round 23 this year:

From the wing, driving ball, up towards Taberner – ball brought to ground – Fyfe to do the roving. He slips it through to Brennan Cox – the Dockers could get the answer here! Fumbled here under pressure – Cox taken to ground and holding the ball the decision.

As soon as we try to place Papalia’s spoken English on the page/screen it becomes hard to understand and our choice of the punctuation changes how you read it. Here, there are also fast-paced topic changes, and visualising action is more important than who performs it. Like an epic poet, Papalia improvises in short phrases, not sentences, because it creates vivid images of fast action. 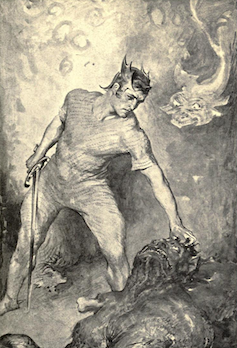 If you’re listening to the action, you need the information in a different order to written English, so the literary decisions commentators make are typical of archaic improvised or semi-improvised epic poetry. Action, characterisation and only then the person being talked about. If there’s time, maybe something about the person, too. Something like this: “Scrubs it off the deck – beautiful kick! – Dangerfield, the great man”, or Beowulf’s “Felt body-pain, the fierce aggressor”.

Like epic poets, commentators are always playing for – and with – time. Even commentators responsible for special comments – analysis more so than action – must work around the play. Papalia’s only opportunity for characterisation in that blistering passage of play in Fremantle versus Collingwood is a few word choices: “slips”, “fumbled”, “driving” and “roving”.

And yet he digresses to tell us something that isn’t happening — yet: “Dockers could get the answer here”. And that’s typical of epic poetry too.

In the heat of the fight with the monster, Grendel, the anonymous poet digresses to foreshadow the future feuds in the Scylding dynasty; ultimately human beings, not monsters, are a greater threat to the Danes.

In short, commentators and epic poets cut ruthlessly to convey action, but then digress or repeat to amplify it:

The door gave way, held fast with fire-forged bands. He touched it with his hands – evil-minded – he tore it open, now that he was enraged, the mouth of the hall.

The quick initial description “the door gave way” is restated twice (“he touched it”, “he tore it”). Similarly, in the initial commentary of a Shaun Burgoyne free kick (Hawthorn versus Melbourne semi-final, 2018), commentator Cameron Ling simply says:

Burgoyne: did he have his feet taken?

The end of the formula “… out from under him” is omitted and the interrogative phrasing is the quickest way of signalling ambivalence about the umpire’s decision.

But Ling follows up with dramatic repetition:

Notice, too, the abrupt switch of focus at the end of the Beowulf passage, which pulls us back to the point: the monster is now in the hall.

Bruce McAvaney does the same when he calls a goal by Melbourne’s Angus Brayshaw:

Viney twists and turns, and does it magnificently, and kicks to centre half-forward. And Brayshaw takes a beauty. Oh, Viney!

Brayshaw gets the goal, but Viney is the main attraction for Bruce.

Read more: Guide to the classics: the Icelandic saga

In this kind of text, action and digression are always in tension. After Hawthorn’s Tom Mitchell injures his shoulder in the same game, Ling offers a complex response to the initial incident, to what is just, what football should be, what players owe barrackers, and to what intense competition inspires, in three phrases:

Yet, often, as we’ve seen, redundancy is part of the technique. The “lic-sar”, or “body-pain”, from Beowulf is paralleled in AFL’s “body-strength”, “foot-speed” and hundreds of others.

And when a commentator praises a player outdistancing another for “foot-speed”, is there any danger barrackers would think mental acuity was intended? But that’s not the point. The language emphasises the physicality, makes the image more vivid, and increases our visceral response.

Formulaic elements like these, and anything from Dennis Cometti’s “centimetre perfect” to Bruce McAvaney’s “specialllllllllllllll”, are part of what we listen for. They can be funny (people tuned in to Rex Hunt’s commentaries for the increasingly elaborate nicknames) and they’re familiar.

They are also practical. They buy the poet/commentator time to improvise something breathtaking and original for the most important moments. In fact, the faster the sport, the more commentators rely on formulae.

But back to digression. The divergences from prosaic – in all senses – sentence structure are echoed in larger, narrative “digressions”, where present deeds are understood through the past.

When Beowulf kills Grendel, the Danes improvise a poem comparing him to Sigemund, the greatest past hero; when Hrothgar advises on making difficult decisions, he tells the story of Heremod, who made the wrong decision.

When scores were level in the 2010 AFL Grand Final, 1 minute and 13 seconds before the siren, Denis Cometti said, “Collingwood knows all about draws in a Grand Final,” invoking Collingwood’s 1977 VFL Grand Final versus North Melbourne. And when the ball then went to ground in front of the Saints’ goal, with 54 seconds to go, Leigh Matthews said, “Where’s Barry Breen?”, referring to the player who kicked the winning point in St Kilda’s only grand final triumph, in 1966.

The comparison between the unfolding here-and-now and the mythologised past explains the idea instantly, and with a complexity that would otherwise take many words to match. But it also creates a shared legendary narrative, with each new great deed on the field instantly entering a kind of narrated hall of fame.

AFL commentary developed for radio, designed to replace attendance. In most sports, commentary has modified in response to televised games. But because AFL is played over such a large space, supporters at a match have trouble seeing the action if it is taking place on the other side of the ground (how many spectators enjoy a game more if they are listening to radio commentary, even though they are at the ground?).

Television viewers, meanwhile, cannot see, say, the multiple leads a full-forward makes until ball and player are in the same screenshot. So commentary never became something that was only a vehicle for expert opinion. Even now, commentary replaces or enhances vision — which is also what epic poetry does. Both are improvised, both are devoted to conveying action and both are mesmerising for audiences, trained through long exposure, to be good at listening to them.

If the 2018 AFL Grand Final turns out to be a dud of a game, neutral observers might consider muting Bruce and Lingy and turning instead to an older epic battle.