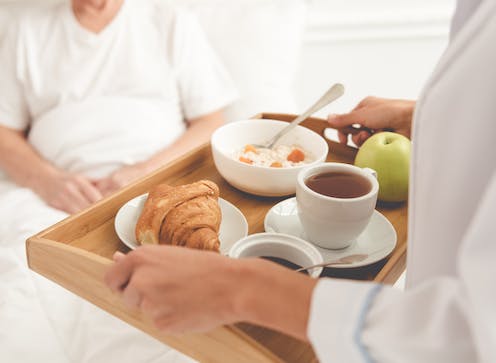 We’ve known for a long time that certain patients in the intensive care unit recover faster and have better clinical outcomes if they receive enough nutrition.

Often, critically ill patients require tube feeding in order to get the nutrition and calories they need while receiving respiratory therapy and mechanical ventilation. However, many patients in the ICU have their feeding tubes taken out, and are encouraged to eat and drink, as soon as they no longer need this respiratory therapy.

Our research shows that more than half of patients in intensive care units don’t get enough nutrition because they eat less than a third of their meals. Of particular concern are patients who stay in intensive care for longer periods and whose nutritional intake remains poor even after they leave the ICU (and sometimes once home).

Read more: What hospital catering could learn from the prison system

Malnutrition in the ICU

Over the years, research has helped us understand some of the reasons (physiological and psychological) why ICU patients’ nutritional intake can be low.

In the initial stages of critical illness (when the patient is at their sickest), mechanical ventilation, sedation and a low level of consciousness mean that most patients need to receive nutrition continuously through a tube inserted through their nose and into the stomach. This is called Enteral Nutrition.

Research into how to improve nutrition in tube-fed patients is vast. However, despite improvements in feeding practices, malnutrition remains a problem for some patients in intensive care.

Fewer studies have focused on the nutritional intake of patients who do not have a breathing tube in place or who can “theoretically” eat and drink. We know that a reduced level of consciousness, poor appetite, taste changes, pain, poor sleep, anxiety, low mood, social isolation, routine changes and an inability to lift cutlery are common barriers.

The purpose of our research was to explore if oral nutritional intake was adequate in critically ill patients after removal of their feeding tubes. We also wanted to identify factors that contributed to patients poor oral intake. We conducted our research at an 18-bed general ICU for adults and children with a variety of serious conditions, post surgery or acute illness.

Of the 79 patients in the study, 54 (68%) were acute or emergency admissions and 25 (32%) were planned post-surgical admissions. The largest patient group had come to the ICU following heart surgery followed by patients with sepsis and primary respiratory conditions.

Only 38% of the patients were assessed as having adequate food intake, defined as eating two thirds or more of meals on a standard menu per day. Commonly, these patients experienced fewer complications post surgery, had short ICU stays of one or two days and were expected to have a routine, uncomplicated recovery.

The rest of the patient group (62%) did not manage to eat enough, with most of them taking only a third of the meals provided. These patients had a similar mix of medical and surgical conditions. Most were early in their ICU stay and were only there for one or two days before being discharged to a ward after an uncomplicated clinical trajectory.

We do not know at what point they started to take an adequate diet as there was limited follow-up post ICU. However, research has shown that this poor intake persists sometimes beyond seven days for a large proportion of post ICU patients. However much more research is needed into this aspect of nutrition post ICU.

More concerning was the finding for some ICU patients who were in intensive care for much longer (between six and 23 days) were classed as being complex, unwell, critically ill patients. This group had a very poor food intake that persisted all the way through their ICU stay and beyond, sometimes up until hospital discharge. This is concerning because these patient still need ongoing nutrition in order to recover from a prolonged ICU stay.

Such patients are typically classified as long-term. They have been very sick, often requiring multiple lifesaving therapies during their acute phase, but are stabilised, recovering and entering the rehabilitation phase. They are often in the ICU for more than five days and have been receiving enteral nutrition via their feeding tube.

However, our research shows that the tube was sometimes removed too early, coinciding with the removal of the breathing tube. Although this “milestone” signifies the patient is improving, their appetite can remain low for a long time afterwards. They also need ongoing nutrition to counter muscle wasting due to bed rest and to support rehabilitation. This is typically the end result of being acutely unwell, on a breathing machine and on bed rest for a prolonged period.

Unfortunately, this muscle weakness (which can be profound) and ongoing fatigue that long term patients experience, makes it incredibly challenging for them to move, or even pick up and hold cutlery. In our study, more than a quarter of the patients were physically unable to feed themselves and were reliant on a busy nursing staff to ensure they received meals.

Based on our research, we suggest ICU guidelines should include protocols on the transition to oral food. Each patient should be assessed whether they are physically able to feed themselves. For those with significant weakness, the removal of their feeding tube should be delayed until a minimum standard of oral intake is achieved.

Patients’ food intake should be monitored and documented, and ICU dietitians should be involved in assessing when a patient is ready to have their feeding tube removed. Patients in the ICU should also have nutritional drink supplements offered regularly in addition to an oral diet that is nutritious, delicious and appetising.