The lush moss beds that grow near East Antarctica’s coast are among the only plants that can withstand life on the frozen continent. But our new research shows that these slow-growing plants are changing at a far faster rate than anticipated. 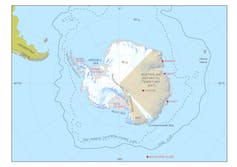 As we report in Nature Climate Change today, within just 13 years we observed significant changes in the composition and health of these moss beds, due to the drying effects of weather changes prompted by damage to the ozone layer.

Living on the edge

Visitors to Antarctica expect to see a stark landscape of white and blue: ice, water, and sky. But in some places summer brings a surprisingly verdant green, as lush mosses emerge from under their winter snow blanket.

Because it contains the best moss beds on continental Antarctica, Casey Station is dubbed the Daintree of the Antarctic. Individual plants have been growing here for at least 100 years; fertilised by ancient penguin poo.

Antarctic mosses are extremophiles, the only plants that can survive the continent’s frigid winters. They live in a frozen desert where life-sustaining water is mostly locked up as ice, and they grow at a glacial pace – typically just 1 mm a year.

These mosses are home to tardigrades and other organisms, all of which survive harsh conditions by drying out and becoming dormant. When meltwater is available, mosses soak it up like a sponge and spring back to life.

When we first began monitoring the moss beds, they were dominated by Schistidium antarctici, a species found only in Antarctica. These areas were typically submerged through most of the summer, favouring the water-loving Schistidium. But as the area dries, two hardy, global species have encroached on Schistidium’s turf.

Like tree rings, mosses preserve a record of past climate in their shoots. From this we found nearly half of the mosses showed evidence of drying.

Healthy green moss has turned red or grey, indicating that plants are under stress and dying. This is due to the area drying because of colder summers and stronger winds. This increased desertification of East Antarctica is caused by both climate change and ozone depletion. 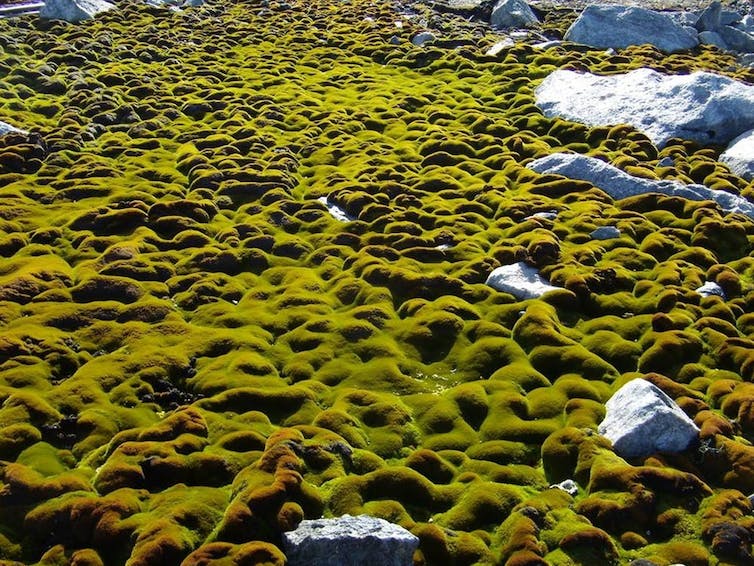 Since the 1970s, man-made substances have thinned Earth’s protective sunscreen, the ozone layer, creating a hole that appears directly over Antarctica during the southern spring (September–November). This has dramatically affected the southern hemisphere’s climate. Westerly winds have moved closer to Antarctica and strengthened, shielding much of continental East Antarctica from global warming.

Our study shows that these effects are contributing to drying of East Antarctica, which is in turn altering plant communities and affecting the health of some native plant species. East Antarctica’s mosses can be viewed as sentinels for a rapidly drying coastal climate.

But there is good news. The ozone layer is slowly recovering as pollutants are phased out thanks to the 1987 Montreal Protocol. What is likely to happen to Antarctic coastal climates when ozone levels recover fully by the middle of this century?

Unlike other polar regions, East Antarctica has so far experienced little or no warming.

Antarctic ice-free areas are currently less than 1% of the continent but are predicted to expand over the coming century. Our research suggests that this may isolate moss beds from snow banks, which are their water reservoirs. Ironically, increased ice melt may be bad news for some Antarctic mosses.

East Antarctica is drying – first at the hands of ozone depletion, and then by climate change. How its native mosses fare in the future depends on how we control greenhouse gas emissions. But with decisive action and continued monitoring, we can hopefully preserve these fascinating ecosystems for the future.