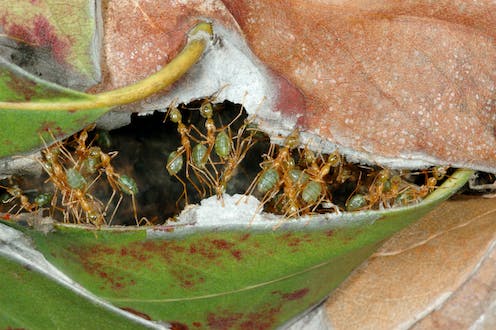 It’s often said that ants can predict impending rain and respond by changing their behaviour.

Some people say that if you see ants building their mounds higher, or building them from different materials, this might signal the coming of rain.

But is there any scientific evidence to support this piece of folk wisdom?

The short answer is “no”, although it is a difficult question to answer partly because of the sheer diversity of ants – there are 13,000 named species on the planet!

Read more: In an ant's world, the smaller you are the harder it is to see obstacles

Ants can deal with rain – but can they predict it?

Ants are equipped with a full array of senses that could, in theory, give them clues about imminent rainfall.

One species, the Florida carpenter ant (Camponotus floridanus), has more than 400 genes for detecting odours – the largest number of any known insect species.

Ant antennae can also detect tiny changes in temperature, which might allow them to sense and react to the drop in temperature that usually accompanies a rain storm.

Given the diversity of ant species and their well-developed sensory systems, it’s possible that some ant species have evolved a way to detect rain before it falls. But observational or experimental data showing that ants actually alter their behaviour in anticipation of rain is currently lacking.

While the question of whether ants can predict rain remains unanswered, we do know that ants have evolved some astonishing ways of dealing with the risk of flooding.

One of the simplest ways ants can survive the flooding of their nest is by holding their breath.

When completely submerged in cool (5-7°C) water, workers of four coastal ant species were able to survive for an astonishing eight to nine days!

Clever architecture can also be used by ants to survive in areas of high flood risk.

During flooding, the ants rapidly relocate larvae and adults to the dry tunnels where they wait for the waters to recede.

Fire ants (Solenopsis invicta) form incredible living rafts by gripping on to one another.

These ants are naturally water repellent – a property that is enhanced when many are packed tightly together. Rafts are assembled rapidly and can stay afloat for days or even weeks.

Bamboo ants (Cataulacus muticus) have perhaps the most entertaining defence against rainwater.

As their name suggests, bamboo ants build their nests in bamboo twigs that are prone to flooding during heavy rain.

At the first sign of flooding, workers run inside the nest and drink as much of the encroaching water as they can. They then proceed outside en masse and collectively urinate, a process fittingly dubbed “communal peeing”.

Read more: In defence of the humble ant, champion of biodiversity

Contact with only a few drops of water causes worker ants of the (Pheidole) species to run around wildly alerting their nest mates to the oncoming threat. Other workers respond by rapidly and efficiently evacuating the nests, carrying the young and queen to safety.

Ant species living in a flood plain build functional levees by surrounding their nests with high earthen walls; these structures are built within 24 hours of a major rain event and prevent flooding by diverting water away from the nest entrance.

So while ants may not be able to predict the rain, they are well equipped to deal with it when it comes.