If you’re a woman, then you’ve definitely experienced the frustration of standing in a long, slow-moving queue for the toilets while watching men quickly go in and out of theirs. And you’ve likely had the same conversation with others in that queue - “Jeez, why does it always take so long!”

Women are more likely than men to wash their hands and to use the hand dryer. So that’s a reason for more women in the general toilet area. But what about the cubicles? Studies show men take an average of 60 seconds in a toilet and women take 90 seconds – that’s 50% longer. If there are the same number of toilets for males and females, this will result in a bottleneck, backing up the flow in and out of the facilities.

Here are some of the reasons women need longer in a cubicle than men.

Read more: Loosen up, it's time to talk about toilets

Some reasons women need more time in the toilet are biological. About half of the female population is of menstruating age (between 12 and 52) and of those, at least 20% will be menstruating at any one time.

Menstruation means women have to deal with other bodily functions in addition to the usual reasons for using a toilet (number ones and twos). Getting pads or tampons out of a bag (or using the vending machine if one is available), unwrapping them, placing them and disposing of the used materials, add to the length of time a woman needs to occupy a cubicle. 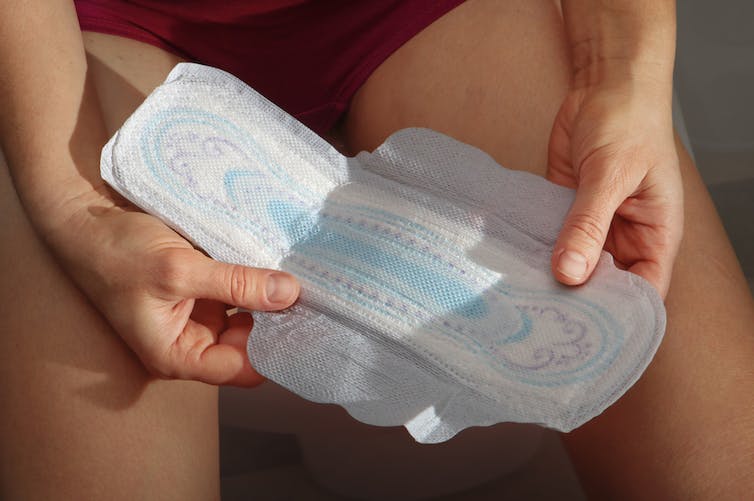 Unwrapping sanitary products, and placing them, takes up time. from shutterstock.com

Women are more likely to have certain health conditions that force them to empty their bladders. These include cystitis, a type of urinary tract infection caused by bacteria. These are more common in women because the bacteria responsible have less distance to travel from outside the body to the bladder.

Read more: Urinary incontinence can be a problem for women of all ages, but there is a cure

Such conditions may also require use of incontinence aids with the same time-consuming unwrapping and disposal requirements as menstrual supplies. Pregnancy at all stages also means more frequent trips to the toilet.

Women’s clothing often takes longer to unfasten, remove and replace, in order to use the toilet in the standard Western seated position. The idea of more than two layers of clothing (under and outer) may be completely mystifying to many men, but women often wear three or more, for practical or fashion purposes (or both). 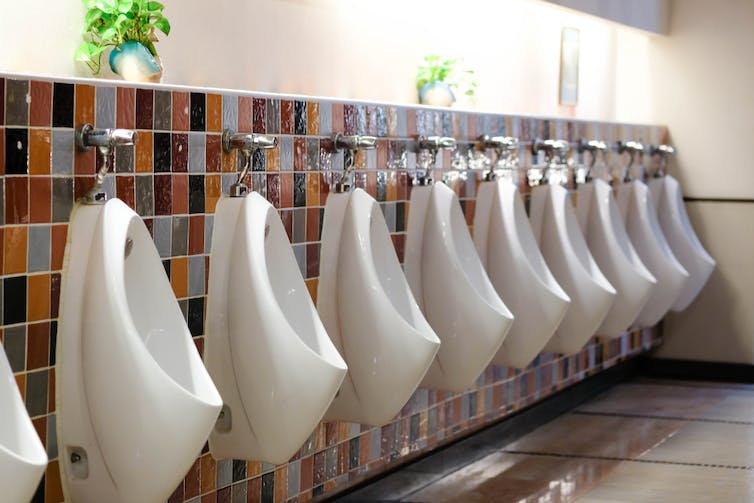 Urinals need less space than cubicles, so more men can use the toilet at the same time. from shutterstock.com

Then there are the design considerations of public toilets. The spatial area of the men’s and the ladies’ toilets may be the same. But a urinal, or several, require less space than a cubicle. So there is less area for women to empty their bladder in the women’s toilets, which means fewer women can use them at any one time.

Also, the urinals in men’s toilets means more individuals can get in and out without having to open, close and lock doors and then open again, or wipe a toilet seat. Although the manbag has caught on among some, most men don’t carry much with them that needs to be safely hung behind a toilet door. So, they already have their hands free and don’t need to look for (and juggle) where to put things.

Read more: How far have we come since the ’80s vision of the 'non-sexist city'?

Women are more likely than men to be looking after small children and taking them to the toilet can be an expedition in itself. Similarly, 81% of paid personal carers and assistants (and 60% of unpaid carers) for people who need assistance with toileting are women. They can be forced to use the cubicles (with extremely limited space for two people) when appropriate facilities are not available. 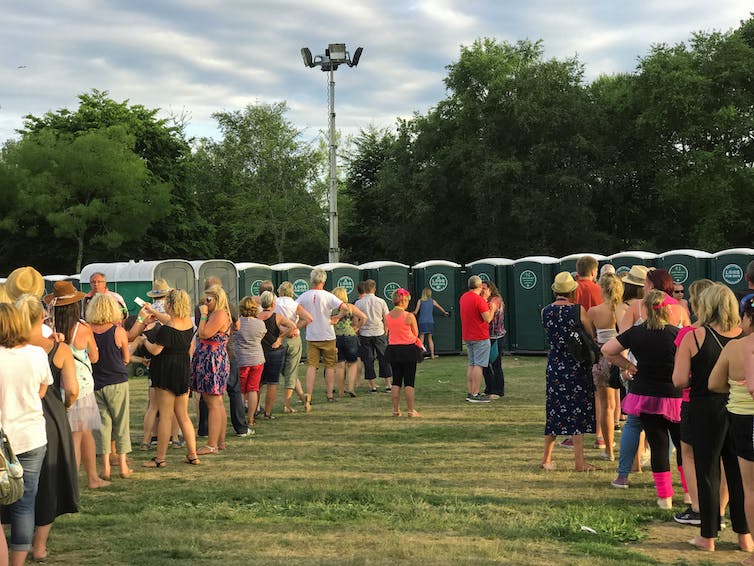 At outdoor events, men often find places to go without needing to queue for the toilets. from shutterstock.com

If with friends or family, and depending on the location and time of day, women will often visit public toilets in pairs or groups rather than alone. This pattern can be due to safety concerns, and it can also be a kind of social or companionable event. Once women have completed their toileting and washed their hands, they may then spend some time checking and adjusting their clothing and appearance in the mirror.

At some outdoor events under the cover of darkness or vegetation, a few men take matters into their own hands and don’t use the public toilet facilities at all. This obviously reduces men’s demand for the toilets (with the benefit of making the men’s toilets available for desperate women, although cleanliness concerns in these situations can also deter them).

Read more: To design safer parks for women, city planners must listen to their stories

All these things add up to more time and more individuals in a limited space, with queues as the result. In Hong Kong, building regulations now specify there must be 1.6 female toilets for every one male toilet in public places. Such moves in other countries would be welcome. Designers and providers should use a more equitable rather than an equal allocation of space and facilities, so women can take the time they need in a toilet without having to pay for it by waiting longer.