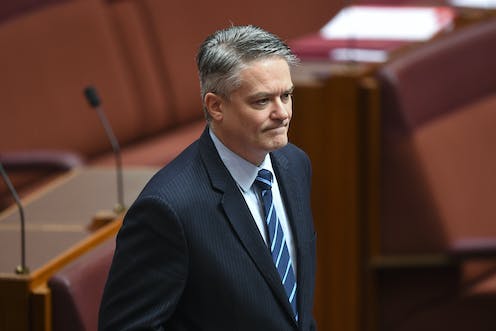 The government has finally lost its bid to give big companies tax cuts, after the Senate rejected a desperate compromise that would have excluded the big banks.

With the Liberals in free fall over the leadership crisis and Peter Dutton admitting he is shaping up for another tilt at Malcolm Turnbull, the Senate defeat of the tax cuts, by 36-30, although long expected, was yet another blow to a reeling government.

Earlier Dutton, on 3AW, said of his campaign for the prime ministership: “I’m speaking to colleagues, I’m not going to beat around the bush with that.”

“If I believe that a majority of colleagues support me then I would consider my position”.

Dutton said he did not think the government should persist with the business tax cuts to the election.

“I would support that money being applied either to households or to a tax cut for small or micro businesses to allow them to grow”.

His stand on the big business tax cuts is part of the highly populist policy pitch he is putting forward, which includes removing the GST from electricity bills and having a royal commission into power companies.

“We could set up a royal commission into the electricity companies and into the fuel companies. I think Australian consumers for way too long have been paying way too much for fuel and for electricity and something just isn’t right with these companies.

Read more: View from The Hill: Malcolm Turnbull struggling to shore up his border

"Like we’ve done with the banks, I think the royal commission has the ability to get to the bottom of what is fundamentally wrong in the system, and what could help ease some of that pressure on families and potentially small businesses.”

The Senate defeat ends months of wrangling by Senate leader Mathias Cormann to get the tax measure through. Those against, apart from Labor and the Greens, were crossbenchers from One Nation and Centre Alliance, as well as Derryn Hinch and Tim Storer.

The government has already legislated phased-in cuts for companies with turnovers up to $50 million annually. The defeated legislation would have phased down the corporate rate for the big companies from 30% to 25% by 2026-27.

The proposal to exclude the banks was put by the government as a last roll of the dice. The debate was strung out this week as Cormann tried to swing the critical crossbench votes.

Cormann told the Senate the government understood the politics in relation to the banks, but as for other big companies, it was critical for Australia to have a competitive tax rate. Hinch unsuccessfully promoted a proposal to impose a ceiling of $500 million turnover.

During Wednesday morning’s debate, Labor made merry with the Liberal leadership chaos.

Labor frontbencher Doug Cameron said “The question is when is Senator Cormann going to join his great mate, Peter Dutton? When is he going to join him and when is the end of this government going to actually happen? I hear that it’s on again.” On Tuesday, Cormann declared his backing for Malcolm Turnbull.

The Business Council of Australia said: “The Senate’s failure to support a modest company tax cut over the next decade leaves Australia with the third highest company tax rate in the developed world, and at risk of having the highest.

"It is extraordinary that Senators representing states where business investment is so vital have walked away from this for pure short-term political reasons.”