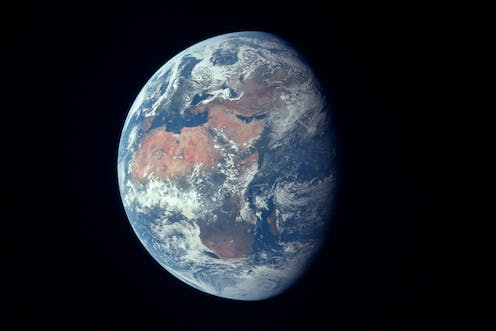 The term “Big History” was coined in the early 1990s by the historian David Christian of Macquarie University. It is nothing if not ambitious, aiming to integrate human history with the deeper history of the universe.

The story begins with the origin of the universe in the Big Bang some 13.8 billion years ago. It continues with the formation of subatomic particles and the origin of simple atoms, principally hydrogen and helium. This is followed by the origin of stars and galaxies, and the creation of chemical elements heavier than helium in stars. Our own solar system formed 4.6 billion years ago from material produced by these earlier generations of stars.

Various species of hominins appeared a few million years ago. With the eventual appearance of Homo sapiens some 300,000 years ago, human history can finally take over. An excellent online overview of the whole story has been compiled by the Big History Project.

Bringing the sciences and humanities together

This is the vast perspective on human history that Big History seeks to make better known. Of course, as sketched here it seems very anthropocentric. If bacteria, or trees, or dolphins were formulating their own versions of Big History, the latter stages would be rather different.

On the other hand, and this is important, the earlier stages would be exactly the same - all life on Earth has shared a common history for most of the age of the universe.

Read more: Big History: why we need to teach the modern origin story

As Christian has recently articulated, Big History can be viewed as a modern “origin story”, but one with the great advantage of being as factually true as modern science can make it. Moreover, as science learns more about the universe and our place within it, the narrative can be continually corrected and updated.

It is generally accepted that Big History can yield intellectual benefits by forcing academics in different disciplines to work together. For example, it forces astronomers to talk to geologists and biologists. In this respect, it has some synergies with astrobiology, the science devoted to searching for life in the universe.

By getting scientists to engage with the humanities, it may also help bridge the “two cultures” divide identified by C.P. Snow in his famous Rede Lecture in 1959.

But would a wider appreciation of Big History yield any practical benefits for society? This was the subject of a meeting held last month at the Australian National University under the auspices of the Humanities Research Centre. At least two possible societal benefits of Big History emerged from the discussion.

Firstly, the evolutionary perspective provided by Big History powerfully reinforces the fact that all life on Earth is related and shares a common history. Moreover, as far as we know today, Earth is the only place in the universe where life and intelligence have arisen. Once grasped, this realisation implies that humanity has a strong duty of stewardship to our planet and our fellow travellers on “Spaceship Earth”.

Read more: The oldest star discovery tells much about the early universe

For all we know, the fate of life in the whole universe may depend on us, and us alone.

Secondly, Big History may provide a basis for drawing different human cultures closer together. At a time when populist nationalism and religious ideologies are acting to fragment humanity, it is important to find unifying perspectives that can counter these centrifugal tendencies. As Ursula Goodenough put it in her book The Sacred Depths of Nature:

Any global tradition needs to begin with a shared worldview: a culture-independent, globally accepted consensus as to how things are. … our scientific account of nature, an account that can be called The Epic of Evolution. … this is the story, the one story, that has the potential to unite us, because it happens to be true.

Realising these social benefits will require that Big History becomes much more widely known. This will necessitate introducing it into school curricula around the world.

As several speakers noted at the ANU meeting, there is currently an overemphasis on teaching of national histories in schools. National histories tend to reinforce nationalism, as they are doubtless intended to do, whereas teaching universal, or “big”, history would reinforce more cosmopolitan worldviews.

the study of human history as a whole has only rarely been practised up to the present. … to do so would produce global identities.

It may not be too much to hope that this broadened perspective could eventually help lay the foundation for the eventual political unification of our world. In a powerfully argued recent analysis, Jo Leinen and Andreas Bummel have concluded that such political unification, perhaps in the form of a federal world government, may be necessary if the pressing global problems of the 21st century are to be addressed.

What a legacy that would be for an academic discipline like Big History.