The final design document for the National Energy Guarantee (NEG), released this week, contains a range of claims about the policy’s ability to drive down both greenhouse emissions and electricity prices. But still there is precious little detail on how exactly these assertions are backed up.

Specifically, two claims in the new document released by the Energy Security Board (ESB) are difficult to reconcile with other reputable modelling results.

First is the claim that greenhouse emissions will fall further under the NEG than they would in the policy’s absence. But a fine-grained analysis published a week earlier by the Australian Energy Market Operator (AEMO) suggests that the target of cutting emissions by 26% will be met regardless of whether the NEG is implemented or not. 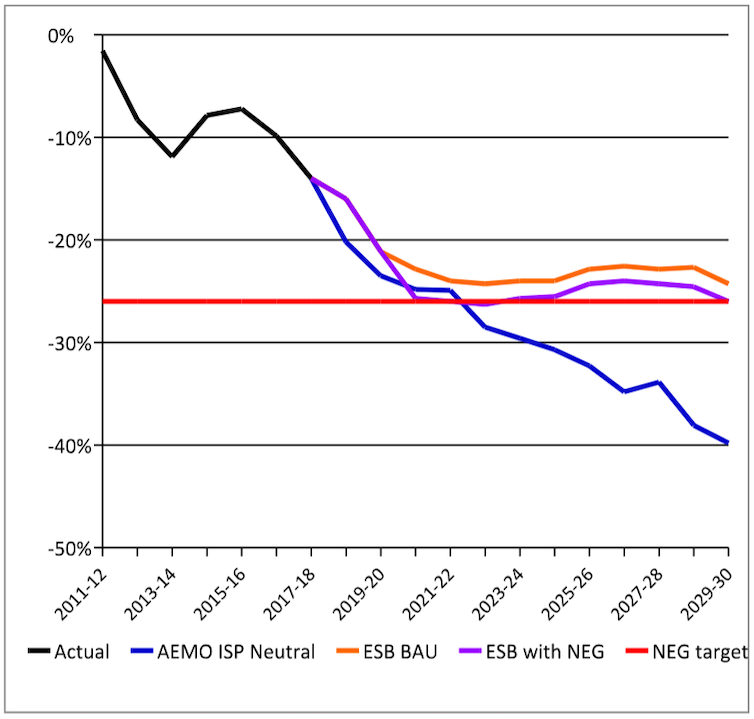 The ESB predicts that emissions will fall further under the NEG (purple line) than without it (orange line). But according to the AEMO’s forecast (blue line), emissions will drop by more than this, even without the NEG. NEG modelling data are approximate, derived from measuring graphics provided in the ESB report. Hugh Saddler, Author provided

If the AEMO analysis is right, the NEG in its currently proposed form will do nothing to cut emissions.

Read more: AEMO's new electricity plan is neither a death knell nor a shot in the arm for coal

The second claim is that wholesale electricity prices will fall by a further 20% under the NEG. But it is hard to see how this will happen, given that the policy is not expected to trigger large changes to the energy landscape. The ESB’s document provides no raw data on this, but if we squint hard at the graphs provided in its modelling summary, we get the following: 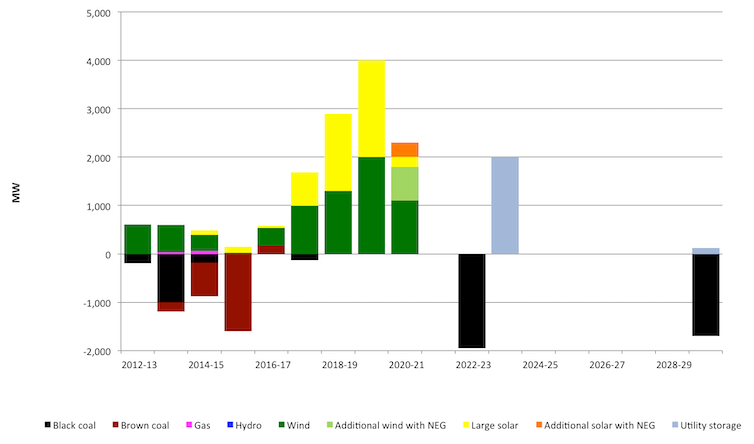 This is not just a technical quibble. Much of the political justification for the NEG rests on the hope that it will deliver cheaper electricity. But how?

Taking the assumptions provided in the ESB’s document, we can attempt to deduce what will be the main drivers of price changes, in rough order of importance:

The modelling assumes that contract coverage – electricity retailers and generators currently use electricity contracts to manage their exposure to fluctuating prices in the spot market – will increase by 5% under the NEG.

Whether this would indeed drive an additional 5% of contract coverage is rather difficult to ascertain given the information provided. On the face of it, 5% seems a lot given that the reliability requirement is not expected to be triggered, noting that no reliability issues have been identified in the AEMC’s recent reliability standard and settings review and that even the base cases in AEMO’s Integrated System Plan do not trigger reliability problems.

Even if contracting does increase by 5%, how does that push down prices? This is a crucial point and yet it is not backed up by adequate analysis or evidence in the ESB report.

The ESB’s chain of reasoning appears to be: the NEG will result in a greater share of electricity output being sold under contract in anticipation of the reliability requirements kicking in; this will lead to lower spot market prices; this in turn will also pull down prices in the contract markets, reducing average wholesale prices overall.

So it all hinges on retailers changing their wholesale purchasing habits so as to ensure they meet the reliability requirement – even though, as discussed above, the reliability requirement is unlikely to be triggered Moreover, it is hard to believe that contract prices would fall as a result; it seems just as likely that the generating companies that sell those contracts (and which wield significant market power) would raise their prices, not lower them.

The ESB assumes that the NEG will deliver an extra 1,000 megawatts of renewable capacity.

But this is an assumption, rather than a modelled outcome. The only justification offered is the ESB’s assertion that “recent renewable investment trends have been in part supported by the likelihood of an agreement to implement the guarantee”.

This is surprising, given that the NEG’s emissions target is so weak as to be ineffective, and ESB’s assumption that the policy will drive down power prices (and therefore profits for renewables generators). Any direct incentive for investment in renewables is highly unlikely to be coming from the NEG; the only plausible reasons would be greater confidence and lower financing costs.

Demand response – in which consumers alter their power consumption so as to reduce peaks in electricity demand in exchange for payment – can potentially make a big difference to power prices by reducing the incidence of high-price events.

The use of this strategy is already growing strongly among electricity market participants. But once again, the ESB has given us little evidence to back up its assumption that the no policy case will have lower demand response than under the NEG. It all again hinges on the effect of the reliability requirement on contract coverage and on the extent to which emerging demand response products can take advantage of this. Very little analysis and no evidence to back up the choice of assumptions is contained in the ESB’s policy document.

Read more: Baffled by baseload? Dumbfounded by dispatchables? Here's a glossary of the energy debate

Certainly not. Given the highly publicised political disagreements (even within the government’s own ranks) about the NEG’s emissions target, it seems likely that substantial policy uncertainty will still linger.

Regardless, this scarcely matters for the price outcomes modelled by the ESB, given that the model is predicting very little new electricity investment and the small amount of additional investment in the model attributed to the NEG is entirely assumption-driven, rather than a modelling outcome.

Read more: The National Energy Guarantee is a flagship policy. So why hasn't the modelling been made public?

Overall, the latest policy details don’t inspire confidence that the NEG will actually drive down power prices relative to what will happen anyway. We need a credible analysis of these assumptions, and modelling to tease out the effect of varying them.

It is helpful that the final report by the ESB does include at least a summary of the modelling. From here, it would be useful for the ESB, and the modellers it hired, to provide an investigation of the issues we have outlined here, or to undertake one if this has not yet been done.

As per this week’s open letter from energy analysts calling for the release of the modelling, independent researchers have offered to provide peer review. Let’s hope the ESB takes us up on it.