Review: Lysa and the Freeborn Dames at La Boite, Brisbane.

The three-woman chorus in this energising, thought-provoking and very well written and acted piece of theatre entreat us to “make the political practical”. Writer Claire Christian and the team have managed to make it intensely personal as well.

Lysa and the Freeborn Dames, which recently saw its premiere at La Boite, is the story of the night 19-year-old Lysa King (played by Tania Vukicevic) stages an impromptu protest at her local football club, influenced by the worldwide women’s marches. She has summoned her friends and locked one of the star players, Grant, in the stockroom, with the idea that this will make the townsfolk pay attention to her demands; and also as payback for something she has found out about him.

What starts with the actions of a slightly ill-prepared idealist descends into an unexpected town-wide night of reaction scarily quickly. Matters are complicated still further when Lysa’s ex-girlfriend (Peta) shows up, followed by the police. Fortunately Ken (the copper) is the girls’ old school friend, which changes the dynamic and gravitas of the situation, often in very humorous ways. 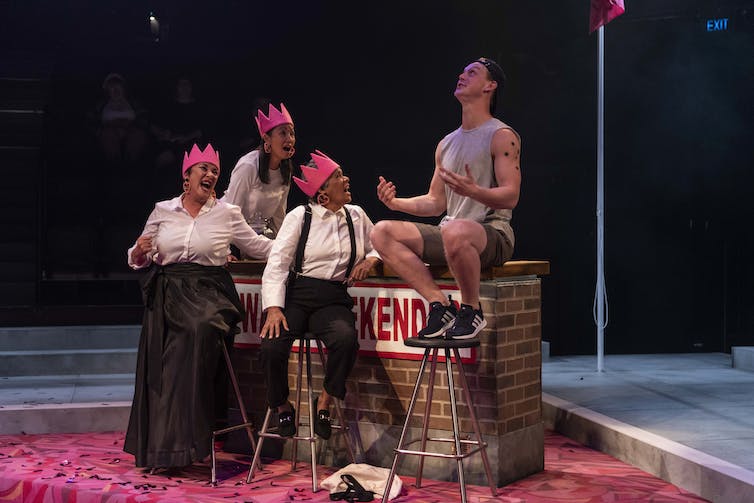 A pink flag proclaiming “Pussy Power” flaps in one corner of the set, the rest is a stylishly simple sunken floor which is the “Anytown” football club’s bar, all nasty 1960s swirly carpet, low-backed barstools and exposed brick bar. You just know there’s a case of KB Lager lurking somewhere in the stockroom. We enter the auditorium to pumping dance music at not quite club-level volume.

There’s a bit of background context about this particular weekend (“War Weekender!”), which is interestingly conveyed, and there are some lovely touches about the tradition of the Lady; one of the very traditions which Lysa is attempting to challenge and change. Lysa wears a t-shirt proclaiming that she is “Feminist AF” (“feminist as fuck”).

Complimenting the action is the chorus of three older women (perhaps the Freeborn Dames of the title), who at three points in the play take centre stage and relay stories, thoughts, memories and philosophies of their human selves. I surmised that their black-caped, pink felt-crowned selves were more of the “spirit of feminism” world. They also provide commentary both on the internal and external action and contribute some welcome zest as well as wise, timeless reflections on womanhood. I very much liked the idea of our bodies and their composite cells knowing our history, even if we cannot consciously know it ourselves.

The disagreements between Lysa and her father throughout the play reflect the larger conflict between establishment and youth without ever signposting or spelling this out. The character of Lysa is very well written and played, to such an extent that she inspires and frustrates in almost equal measure, not just among the audience but her friends as well.

There is use of a “fantasy rewind” conceit a few times to great comic effect, which is effectively supported by clever staging and sound and lighting design. 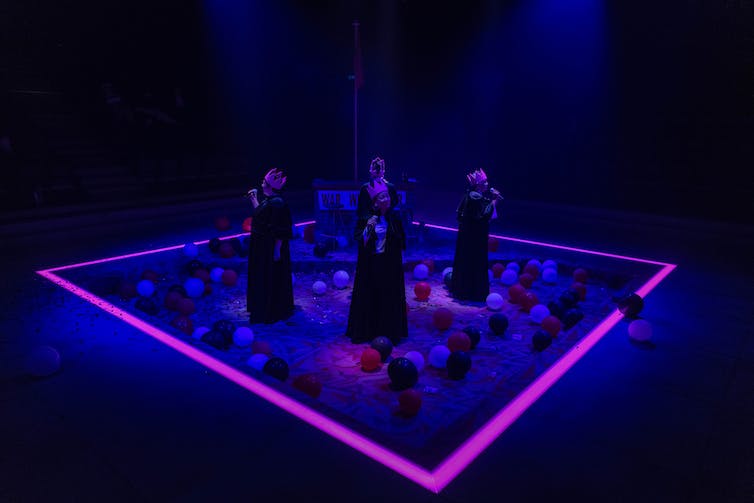 Clementine Anderson as Lysa’s former girlfriend Peta was a touching mix of resilient and regretful. Jackson Bannister (Grant) was terrifying as the imprisoned alpha male football star with a nice comic moment. Morgan Francis (Ken the copper) gives a lovely performance as an innocent who grows up a lot in a short space of time. Samantha Lush (Myra, one of Lysa’s friends) plays her as tough as nails until the pressure of public opprobrium shows that the opinions of the town matter to Myra more than we’d think. Tatum Mottin (Esme, another friend of Lysa’s) makes Esme initially quite vacant and dim but really comes into her own in the play’s closing moments.

Hugh Parker (Dad) subtly conveys a man who accepts things as they are because they’ve always been that way (and he is one of the beneficiaries), whilst also slowly starting to acknowledge his daughter’s point of view. And Tania Vukicevic (Lysa) gives a sympathetic portrayal of a character who could have been a bit too “right-on” but ends up making you want to go out and make a difference yourself.

Sanja Simić’s direction is clear and uncluttered. This is a play with big and small themes beautifully intertwined. And it’s Funny AF.

Lysa and the Freeborn Dames will be staged at La Boite until August 11.