Hello. My name is Hannah from Toronto, Canada, age 4. I would like to know why do birds sing. Thanks – Hannah, age 4, Toronto.

Hi Hannah, thanks for your excellent question.

Lots of animals use sounds to say things to other animals of their kind. People and birds that sing are a bit special though.

Birds don’t use words like people do, but they also need to learn their songs, the same way babies need to learn talk by listening to their families speaking their own language (so some human babies learn English, others learn French, or Chinese, or Greek).

Read more: Curious Kids: Where do seagulls go when they die and why don't we find dead seagulls on the beach?

Most other animals are born already knowing the sounds they need to communicate, but baby birds spend a long time learning how to sing.

Scientists think birds sing mostly to impress other birds (because it takes lots of practice to master the art), and maybe also for fun.

Birds have some simple sounds that they use to say basic stuff like, “Watch out, there’s danger” (these sounds are called “alarm calls”), or “Hi, it’s me” (these are called “contact calls”). But bird songs are more complicated than calls, and they usually use their songs to show off.

Birds that spend lots of time and energy practising, to learn lots of different types of complicated songs, are often better at impressing the others with their great song repertoire (a repertoire is a collection of songs).

Some birds have even bigger repertoires because they sing sounds of other birds - listen to this amazing lyrebird imitating laughing kookaburras and other birds!

Boys and girls both sing

Living in Canada, or other places in North America and Europe, means the birds you hear singing most are often the boys. They are usually singing to impress the girls and make the other boys stay away from their stuff, like their food or their yard (“territory”).

But girls sing too, since way back in time, when the family tree of the songbirds first started in the parts of the world around Australia. Even now, for people who live in Australia and other parts of the world, it’s quite likely that a bird you hear singing is a girl. 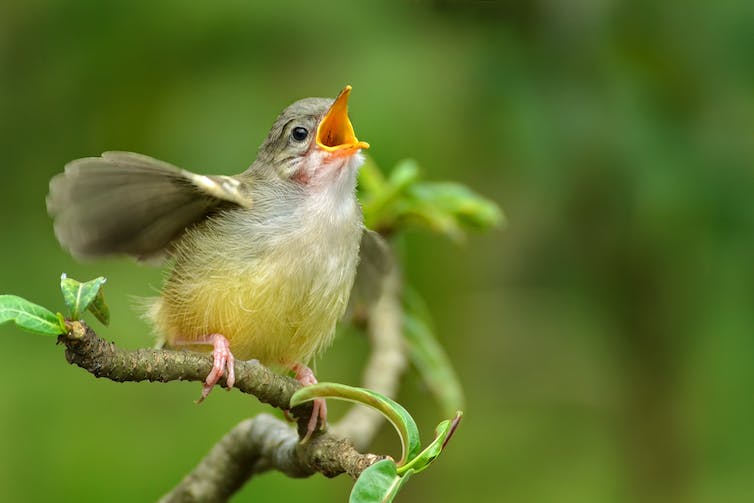 Read more: Curious Kids: Why aren't birds pulled down by gravity while they're flying?

In birds where both sexes sing, boys and girls sometimes sing together to make duets, like this one:

We don’t know as much about why girl birds sing, but we think they might also sing to show off. Keep your ears and eyes open, and share what you find out.

Here’s one example of a female bird singing, a superb fairy-wren:

Could birds sing because it makes them feel good, like how people enjoy making and listening to music? For a long time, we couldn’t answer this question because we had no way of knowing about birds’ feelings. Recently though, scientists have started using what we know about the things that happen in our brains when we feel good, to try to work out whether singing might make birds feel good. 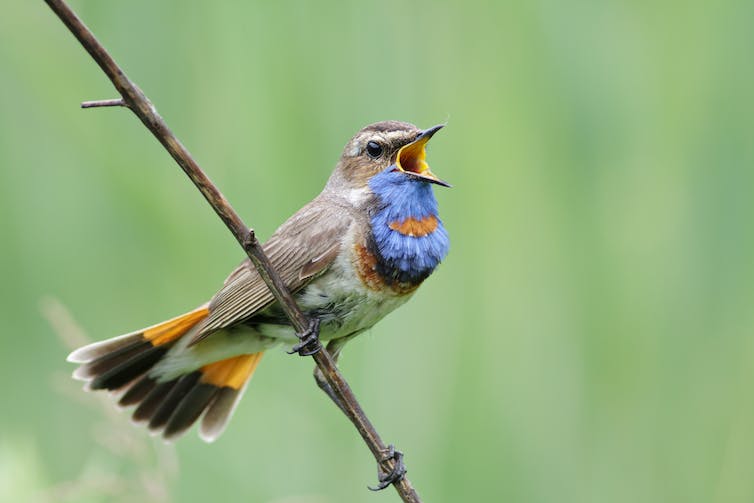 The hills are alive with the sound of music. Shutterstock

Early indications are that when a bird is singing directly to another bird, its reward comes from the other bird’s response to the song. Sometimes birds sing even if there are no other birds nearby to react though. So maybe singing to itself causes changes in a bird’s brain chemistry like we experience when something makes us feel good (singing often makes humans feel good too!).

Read more: Curious Kids: Where do seagulls go when they die and why don't we find dead seagulls on the beach?