In our Here’s looking at series our experts explain prominent works of art. 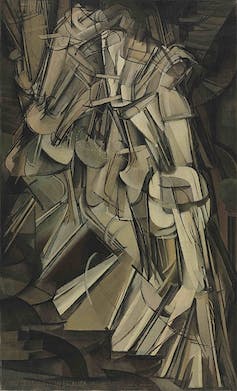 Nude Descending a Staircase, No. 2. Wikimedia

In 1913, the debonair young artist Marcel Duchamp was riding a wave of outrage and incomprehension following the inclusion of his painting Nude Descending a Staircase, No. 2, in the Armory Show in New York. The exhibition opened on March 15, and his work was the talk of the town, parodied by all, including Julian Street, the art critic with The New York Times, who described it as “an explosion in a shingle factory.”

Duchamp was 25 years old. In the previous decade, he had arrived in Paris and was introduced by his brothers Jacque Villon and Raymond Duchamp-Villon to the most experimental artists of the time. He eagerly experimented with Impressionism, Fauvism, and Cubism but it wasn’t until the furore created by his work in the Armory Show that he was thrust centre stage into debates about the future of art.

Those critical and personal attacks energised Duchamp, who gave up painting and began to explore what art might become in the era post “retinal art” - ie those artworks designed to appeal to the eye. He also turned his attention to the role of the artist in the new world of rampant capitalism on the brink of global war.

In his Paris studio, Duchamp began to create work with a conceptual base and an intellectual complexity that challenged previous notions about both art and art making. And of course, as a young provocateur, he also wanted to get back at those that had criticised him, so he couldn’t resist being a bit cheeky.

Read more: In The Magpie, Monet found all the colour in a snowy day

His first readymade (or assisted readymade because he put two existing objects together) was his Bicycle Wheel, a mass-produced stool with a bicycle wheel attached to its fork so the wheel could spin effortlessly. “In 1913, I had the happy idea to fasten a bicycle wheel to a kitchen stool and watch it turn” he explained in his lecture Apropos of Readymades at MoMA on October 19, 1961.

Although not publicly exhibited until 1951, Duchamp made a second version of bicycle wheel on his first visit to America and coined the term “readymade” to describe it. Andre Breton and Paul Eluard defined this category of artwork in their Dictionnaire abrégé du Surréalisme, or the Abridged Dictionary of Surrealism 1938, as “an ordinary object elevated to the dignity of a work of art by the mere choice of an artist”.

This second version of 1916 was also lost, but in 1951 Duchamp authorised an exhibition copy for Sidney Janis and inscribed in green on the wheel: “Marcel Duchamp 1913 / 1959(sic)”. This is the work purchased by the Museum of Modern Art, currently on show at the NGV. 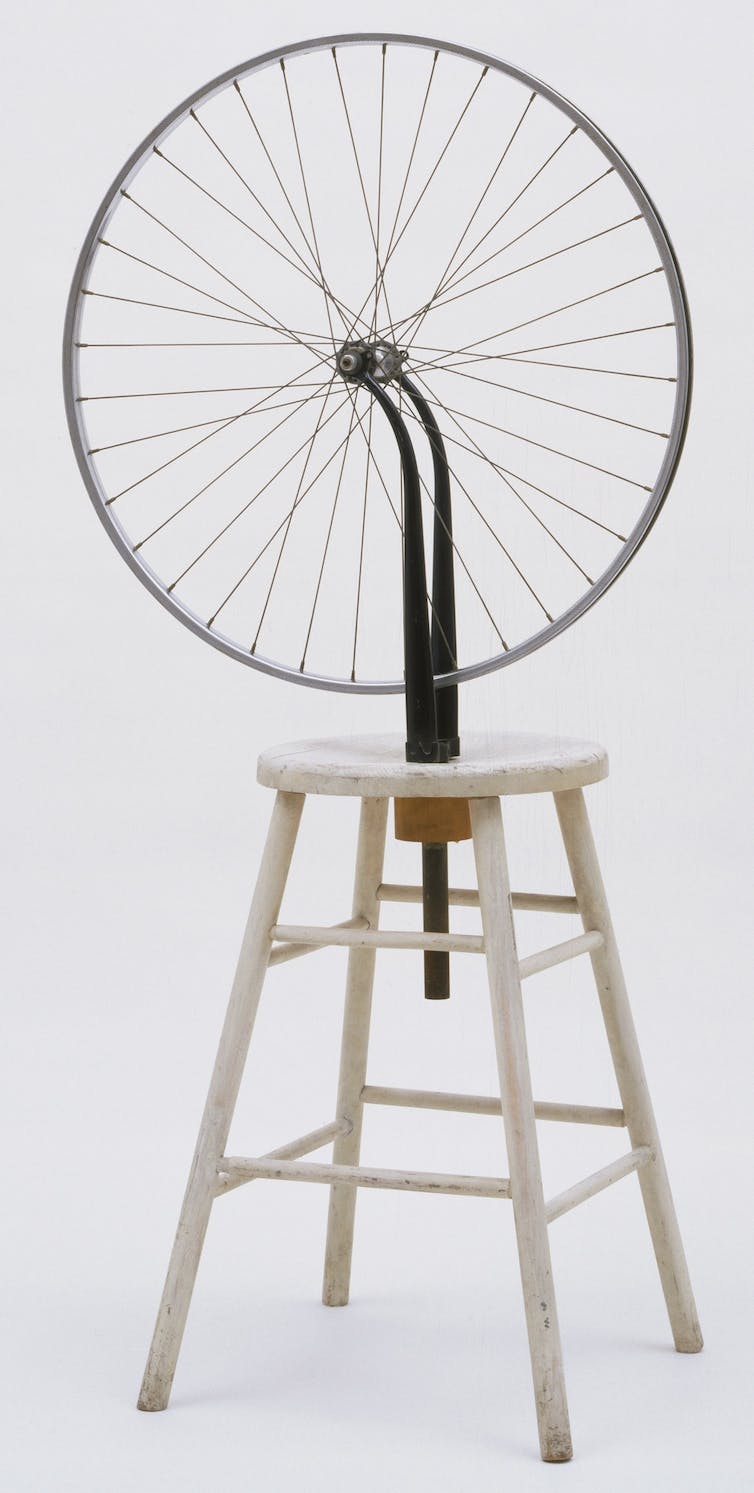 However, there are other authorised copies including one made by Ulf Linde in 1960, now in The Moderna Museet, Stockholm, a version made by Richard Hamilton in 1963 and an edition of eight created by Galleria Schwartz Milan in 1964, one of which is in the collection of the National Gallery of Australia.

This act of authorising encapsulates the Duchampian re-invention of the role of the artist as someone who assigns the status of art to specific objects. For those with an investment in the notion of artistic skill and insight, this was a direct affront. It also undermined the idea of the unique artwork.

The fact that one Bicycle Wheel was made in Paris, another in New York, Stockholm and London and then eight more, was at the discretion of the artist alone, who like any other worker in the industrial age was creating a product to meet the needs of the market.

Of course, it’s never that simple with Duchamp. While thumbing his nose at the art world was great fun, the Bicycle Wheel was also a catalyst for new ideas and for re-thinking entrenched positions. In this one work he not only re-defined the activity of the artist and re-imagined the nature of a work of art in the 20th century, but he also re-interpreted the role of the spectator.

.. the creative act is not performed by the artist alone; the spectator brings the work in contact with the external world by deciphering and interpreting its inner qualification and thus adds his contribution to the creative act.

With his first readymade, Duchamp expanded the conception of artistic practice while simultaneously disrupting the methodology for determining aesthetic value.

MoMA AT NGV: 130 YEARS OF MODERN AND CONTEMPORARY ART is on at the National Gallery of Victoria until 7 October 2018