Aside from being up to the task of drying our dishes, we don’t usually give the humble tea towel much thought. But this week it’s being blamed for causing food poisoning:

But there’s no cause for concern.

Yes, bacteria can accumulate on tea towels, especially when they’re infrequently washed and don’t dry out between use. But most of the bacteria the researchers found on tea towels are not responsible for food poisoning or other gastrointestinal symptoms.

While the media reports focused on the food poisoning risk, the research didn’t actually look at the participants’ gastrointestinal health.

Read more: Explainer: what is gastroenteritis and why can't I get rid of it?

How was the research conducted?

The story came about from a June 9 poster presentation to the American Society of Microbiology’s 2018 meeting in Atlanta, based on research carried out at the University of Mauritius.

The Mauritian researchers purchased 100 tea towels to give to the study participants; 36 were a mixture of cotton and nylon, 33 were pure nylon, and 31 were pure cotton.

After one month of use, the towels were collected to “culture” any bacteria present on them. This means taking bacterial samples and letting them grow in a petri dish to determine the type of organism.

The participants also completed a questionnaire about their tea towel use, diet and family size.

The research did not look at whether the participants had food poisoning or other gastrointestinal illnesses.

What were the results?

Bacterial growth was found in 49% of the kitchen towels. Cotton towels had higher levels of bacteria than nylon towels or a mixture of the two.

Bacterial growth increased significantly with increased family size and the presence of children.

Tea towels which were considered “multipurpose” – such as for cleaning table and bench tops in addition to the kitchen – had higher levels of bacteria than towels that were “single purpose”, such as drying hands and dishes in the kitchen.

The researchers found “humid” (or moist) towels had significantly greater concentrations of certain types of bacteria, such as coliforms. Coliforms are a broad class of bacteria found in the digestive tract of animals including humans, and are found in their faeces. Although most coliforms are harmless, some rare strains can cause serious illness. 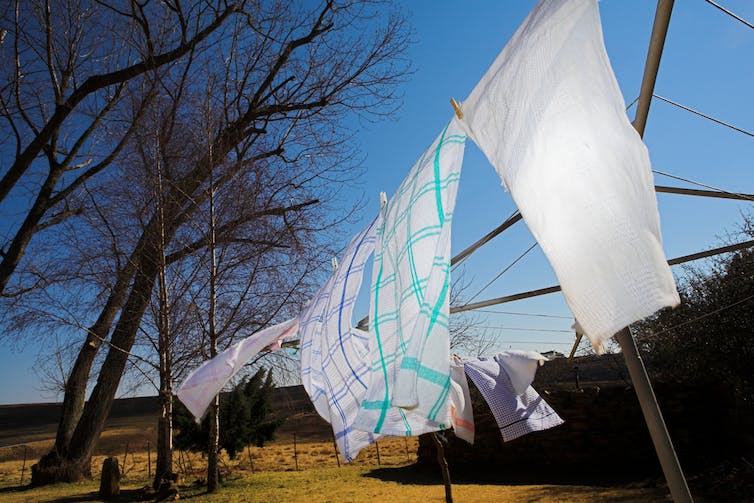 Washing your tea towel after each use is ideal but often not practical. Sean Nel/Shutterstock

They also found that Staphylococcus aureus (S. aureus), a common baterium that lives on the skin, was isolated at a significantly higher rate from families of lower socioeconomic status and families with children, as well as bigger families.

They looked at the influence of diet. Coliform and S. aureus were detected on tea towels at a significantly higher rate from families on non-vegetarian diets.

A higher prevalence of enterococcus species was detected on the kitchen towels of vegetarian families. Enterococci are bacteria which are normally found in a person’s gastrointestinal tract and do not normally cause infections in healthy people, but may in those with a weakened immune system.

What does it all mean?

The research is interesting but shouldn’t cause concern. The majority of bacteria identified were enterococcus and pseudomonas species which are not classically involved with food poisoning unlike campylobacter, salmonella, escherichia and listeria species.

But there are some practical points to take away from the research.

For the best protection, wash the tea towel after every use. But most of us are unlikely to do this, so waiting until tea towels are dry is okay, as drier tea towels will have a lower bacteria load.

Read more: What's the most hygienic way to dry your hands?

It’s best to use tea towels for a single purpose such as drying the dishes, rather than multiple purposes. This will reduce the towel’s bacterial load.

Disposable paper towels are less likely to accumulate bacteria than tea towels that are used multiple times, but the research is yet to establish whether they lessen the risk of gastroenteritis.

What else do we need to take into account?

What we don’t know in this research is what the participants were using for kitchen cleaning before being given the tea towels. Were they using tea towels, a rag or disposable wipes?

We also don’t know how frequently participants cleaned their assigned tea towels and what they used to clean them.

The bacterial growth was found to increase significantly with increased family size, extended family and the presence of children. But does that mean the family members and/or children were using the tea towels more or could it be due to other factors such as children playing outdoors in a dirty environment and bringing organisms back to the house? That was not addressed in the poster. 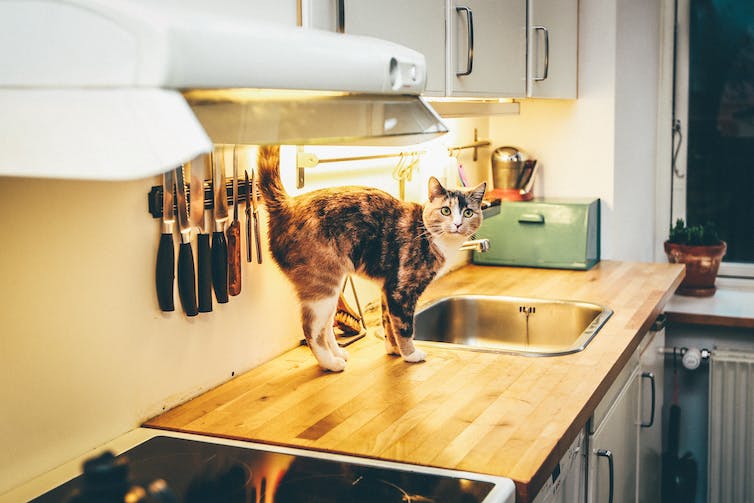 It’s best to use a different cloth to wipe down benches. Nick Karvounis

Generalising the findings to different countries may be a problem. Mauritius is a tropical country and the type and quantity of bacteria on tea towels there could very well be different than in a country with a colder, temperate climate.

Finally, this research was a poster presentation at the American Society of Microbiology meeting this year. The process of getting research published in a peer reviewed journal is a more intense and exhaustive process, which helps to iron out any flaws in the methodology or findings that may not be obvious to the investigators at the time.

So it’s helpful to wait for the formal publication which will have gone through the peer review process before we can extrapolate more conclusions. – Vincent Ho

This Research Check accurately reflects the abstract. This study is one of many that look at bacterial contamination of household items, without reference to more relevant outcomes such as illness rates. – Allen Cheng