As more and more people move to cities, the experience of being stuck in impenetrable gridlock becomes an increasingly common part of the human experience. But managing traffic isn’t just a human problem. From the tunnels built by termites to the enormous underground networks built by fungi, life forms have evolved incredible ways of solving the challenge of moving large numbers of individuals and resources from one place to another.

But how do natural systems – which lack engineers or in some cases even brains – build and manage their transportation networks?

Perhaps the most familiar animal transport systems are the trail networks of ants. As ants walk through their environment they leave behind tiny droplets of an attractive chemical called a pheromone. Other ants are attracted to the chemical bouquet and as they follow it they add to the trail by leaving their own droplets of pheromone. Like Hansel and Gretel leaving a trail of breadcrumbs, ants use their trails to find their way back home. 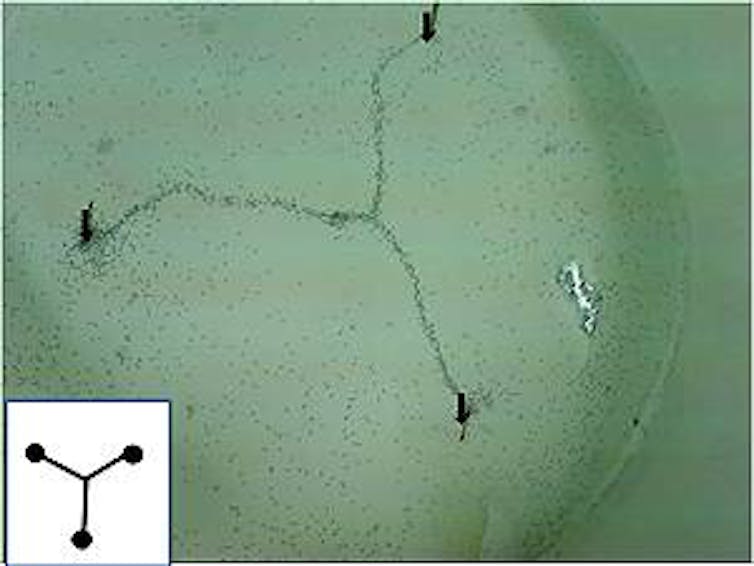 Yet calculating the shortest path between a set of points is a very difficult task. So how do ants, which have brains smaller than a pinhead, figure out the solution?

The answer is elegant in its simplicity. Short, direct paths are faster to traverse, and so more pheromone gets deposited by the higher density of ants. As ants are more likely to follow stronger pheromone trails, shorter, more direct trails attract more ants than do long meandering trails.

Meanwhile, fewer and fewer ants travel along the long paths, as they are attracted away by the stronger, shorter path. Eventually the longer paths disappear altogether due to evaporation, leaving only the direct routes. This simple mechanism allows small-brained Argentine ants to solve a difficult problem.

Australian meat ants (Iridomyrmex purpureus) take trail-building to the next level. Meat ants diligently cut away all vegetation from their trails, creating a smooth path. Unlike Argentine ants, meat ants do not connect their nests using the shortest possible route. Instead they build a network that includes extra “redundant” links. 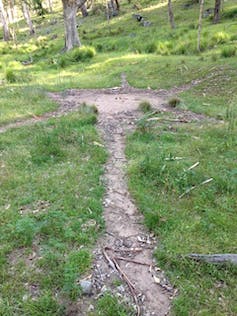 Connecting points with the shortest path takes less time and uses less energy, but it would also result in a fragile network; any damage to any trail would isolate one of the nests.

This is less of an issue for Argentine ants, which can rapidly repair any damage to their trail system by depositing more pheromone droplets. For meat ants, however, damage to the system takes more time to fix. So rather than building a cheap but fragile network, meat ants build networks whose structure neatly balances the competing demands of cost and robustness.

In most human road networks, traffic flows are organised by dividing traffic into lanes where all the cars travel in the same direction. The army ant (Eciton burchellii) also uses lanes – two outer ones for outbound traffic, and one inner lane for nest-bound traffic.

But how do the army ants organise this? Lanes form because ants heading to the nest often carry heavy loads and so tend not to turn away during head-on collisions. Ants leaving the nest tend to veer away from their heavily laden sisters and so end up in the outer lanes.

Again, a simple set of behavioural rules allows ants to ensure they have a fast, efficient transport system.

Potholes are an annoying and jarring part of driving that can slow traffic to a crawl. So when workers of the army ant (Eciton burchellii) encounter uneven surfaces, they take one for the team and plug it with their living bodies. Workers even match their size to the hole that needs filling.

Teams of ants cooperate to fill larger holes. Ants will even form bridges to span larger gaps. They adjust the width, length and position of the bridge to accommodate changes in traffic.

The result of these hardworking ants is a smooth, fast-flowing transport system that works even over the bumpiest terrain.

Fungi build some of the biggest biological transportation systems on Earth. One giant network of honey fungus (Armillaria solidipes) spanned 9.6km. The network is made up of tiny tubules called mycelia, which distribute nutrients around the fungi’s body. 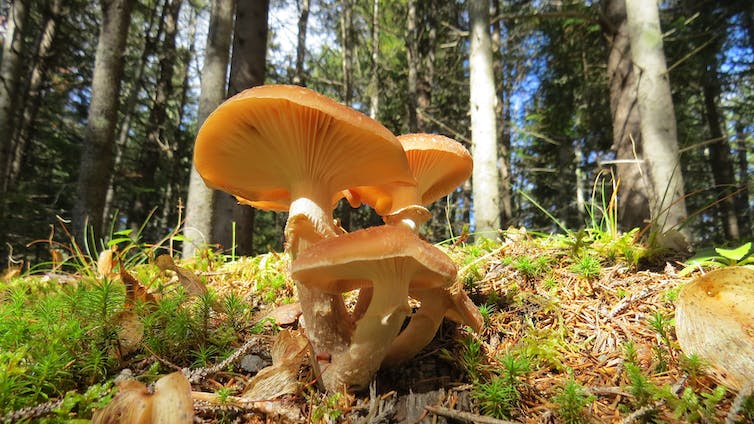 Slime moulds – which are not fungi but giant single-celled amoebas – use a network of veins to connect food sources to one another.

In a highly creative experiment, researchers used tiny bits of food to make a map of the Tokyo metro system, with the food representing stations. Amazingly, the slime mould quickly connected all the points in a pattern that closely matched the actual Tokyo metro system. It seems slime moulds and engineers use the same rules when constructing transport networks – yet the slime mould does it without the aid of computers, maps or even a brain!

Slime mould form a map of the Tokyo railway system.

Nature has found many different solutions to the universal problem of building and managing a transport system. By studying biological systems, perhaps we can pick up a few tips for improving our own systems.