Hi Curious Kids, My name is James and I live in Melbourne and I’m 10 years old. Why do our ears pop when we reach a certain altitude? - James, age 10, Melbourne.

Hi James. What a great question.

The middle ear space is pretty airtight, although air can pass into and out of this space by the opening and closing of the Eustachian tube (the tube that links the middle ear to the back of the throat). Most of us can do this by yawning or opening our jaws, which often results in our ears “popping”. 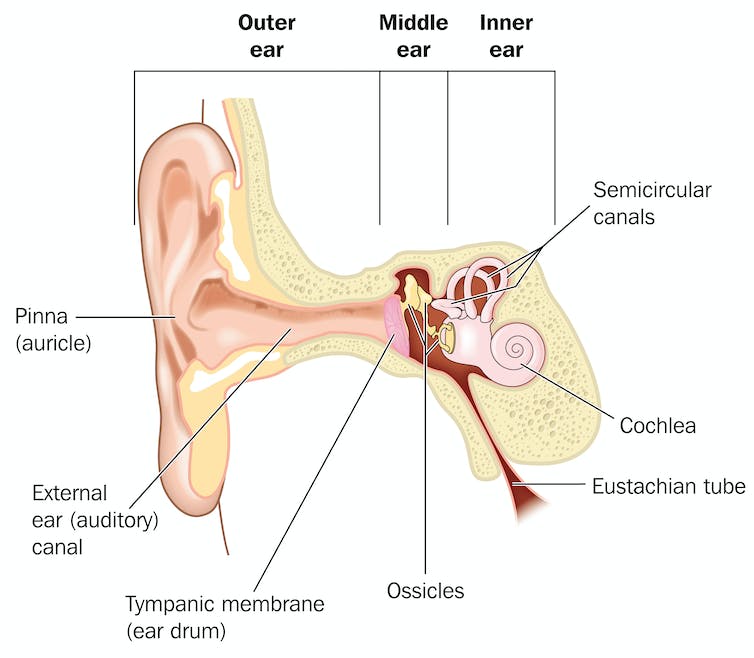 Can you ‘pop’ your ears by yawning? It’s all about the Eustachian tube. Shutterstock

Your ears pop because of the pressure difference between the air outside and the air inside your middle ear space. I’ll explain how that works.

Read more: Curious Kids: How does an echidna breathe when digging through solid earth?

You have a small amount of air sealed in the middle ear space. And then there’s all the rest of the air outside, in the atmosphere.

There is no specific altitude at which your ears pop, and during quick ascents, like during an aeroplane take-off, you may have to equalise or “pop” your ears a few times to keep up with the pressure changes.

Other times, like on a slow walk up a hill, your ears may equalise themselves without you even noticing.

Read more: Curious Kids: where does money come from?

The reverse can happen when you are descending in an aeroplane or going down a hill. The air in the atmosphere increases in density through the descent, while the air pressure in the middle ear space remains low like it was at the higher altitude.

This forces pressure on the eardrum and causes it to retract inwards (instead of bulging outwards on ascent) until your ears pop to make the pressure between the middle ear and the atmosphere more equal.

You can have some trouble if you are doing a significant ascent or descent and have a cold or an ear infection.

The mucus from a cold or ear infection can block the Eustachian tube, making it hard to equalise your ears properly. This can make your ears ache from even small changes in altitude and the eardrum is pushed inwards (on descent) or outwards (on ascent).

Babies and young children often have blocked Eustachian tubes – this may be one reason they don’t like flying.