The largest living whales – including the gigantic 30-metre blue whale – are fast predatory hunters that support their massive bodies by filtering large volumes of tiny prey from cool near-polar waters. They do this using baleen: plates of a tough substance hanging from their upper jaw.

Evidence of early evolution of baleen whales remains both sparse and controversial, with several ideas competing to explain the origin of baleen-based bulk feeding.

New evidence published today, based on our detailed analysis of a large, 34 million year old Antarctic fossil whale, Llanocetus denticrenatus (“yano-seetus” denticrenatus), shows that this whale was all gums and teeth, but had no baleen.

Read more: How 'Alfred' the whale lost its teeth to become a giant filter feeder

Our findings suggest that large gums gradually became more complex over time and, ultimately, gave rise to baleen - and that these ancient whales became giants before they evolved their baleen feeding habits.

The specimen is the second oldest “baleen” whale ever found. It is an ancestor of modern baleen whales, such as humpback and blue whales, except that it had no baleen. Instead, this whale had large gums and teeth, likely used to bite prey some 30 centimetres long.

The size of this whale is surprising, given its place in the evolution of whales. Its skull proportions indicate a body length of 8 metres, about the size of a modern minke whale.

Partially reconstructed cast of the skull of Llanocetus. Andrew Grebneff, who prepared much of the fossil, gives an idea of its size. R Ewan Fordyce, CC BY-SA

The nearly complete skull, minus the tip, is more than 1.6 metres long, and in life was probably more than two metres. Other parts of the skeleton are similarly large and strongly built. There are other unexpected features: Llanocetus has huge openings for jaw muscles, implying a powerful bite, but its teeth are small relative to skull size.

Further, adjacent teeth are separated by wide gaps, and the bony palate has multiple grooves for soft tissues, reminiscent of baleen-related grooves of living species. Yet, we propose that Llanocetus was a predator that bit and sucked its prey, rather than filtering it from the surrounding water like modern baleen whales. 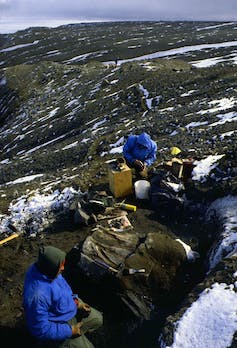 Fossil discoveries in new territory are hoped for, and sometimes expected, but there is usually an element of serendipity. One of us, Ewan Fordyce, found the Llanocetus specimen at an inauspicious site while visiting Seymour Island, just east of the Antarctic Peninsula, with a US field party of paleontologists. Rocks on the island include shell-rich marine sediments - with reports of rare whale bone dating to about 34-35 million years.

Fordyce initially saw bone fragments scattered in an eroding gully, and followed them uphill to a mother-lode: hard cemented boulders containing obvious large skull bones and, finally, a distinctive tooth with finger-like projections. Our field party excavated more bones from their source in a layer of icy sandstone, and crated the material for eventual preparation and study in New Zealand. 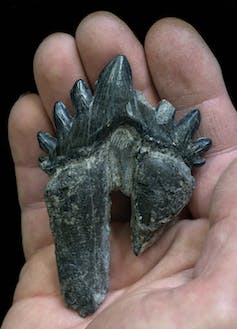 At 34-35 million years, Llanocetus is a little younger than a related whale, the roughly 36 million year old Mystacodon from Peru. These two whales are the oldest described for the lineage leading to modern baleen whales. They lived shortly before long-term global climates changed from warm greenhouse conditions to a cooler icehouse world.

Today’s baleen whales include the fast-swimming rorquals, such as the blue and minke whale, and the slower-moving right whales. These whales are toothless, but have hair-fringed flexible plates of baleen hanging from the upper jaw - hence their name.

Baleen plates have a distinct bony origin on the upper jaw bones, which in modern whales is often marked by a series of openings and grooves for associated blood vessels. We can trace that bony origin in fossil whales back to around 24-30 million years ago. Such fossils from New Zealand represent several groups in the early history of baleen-bearing whales.

For example, Mauicetus is near the start of the rorqual lineage, while Toipahautea is close to the common ancestor of modern rorquals and right whales. Tokarahia traces back to the very base of the baleen whale radiation.

If we go further down the evolutionary tree, we find smaller whales with ancient-looking skulls - the aetiocetids and mammalodontids. These animals lack clear evidence for baleen, but they do have functional teeth. Hence, we often use the formal name Mysticeti for the lineage of true baleen whales, modern and fossil, plus their toothed precursors such as Llanocetus.

Initially, the skull of Llanocetus looks like a hybrid: a flattened, triangular upper jaw like that of a minke whale, but with the teeth and the remaining skull reminiscent of a basal whale, such as Basilosaurus. Detailed comparison of structures amongst baleen and other whales, however, shows that Llanocetus indeed is in the lineage leading to modern baleen whales.

We used tooth form, wear and placement in the jaws to infer feeding. The cheek teeth are separated by wide gaps, but these gaps were not filled by alternating upper and lower teeth to form a mechanical sieve. Rather, polished wear patterns on the tooth crowns indicate that the upper and lower teeth sheared against one another to bite and slice food.

What, then, filled the large gaps between the adjacent teeth? Baleen is unlikely. The bony palate has multiple grooves probably for blood vessels and nerves, but the grooves run directly to the tooth sockets where baleen plates would be unlikely to function, given the shearing movement of the teeth. We propose that the palatal grooves supplied gum tissue both around and between the teeth.

Earlier research proposed that several of the toothed ancestors of modern baleen whales sucked in small fish with a piston-like tongue. In some species, wear patterns on the teeth indicate that prey items were sheared apart. It seems, however, that no species fed using a combination of teeth and baleen, or fed using teeth to sieve prey from the water.

Llanocetus confirms this pattern, and suggests that the earliest whales did not filter feed, but used raptorial and/or suction feeding. Baleen arose only later, probably from the enlarged gums that were already present in Llanocetus. Nevertheless, Llanocetus managed to grow large some 25 million years before our modern gentle giants. Long before orca and giant sperm whales, it was one of the largest predators of its time.