This article is part of the Revolutions and Counter Revolutions series, curated by Democracy Futures as a joint global initiative between the Sydney Democracy Network and The Conversation. The project aims to stimulate fresh thinking about the many challenges facing democracies in the 21st century.

With Iran’s ruling clergy already preparing to celebrate the 40th anniversary of the 1979 Islamic Revolution, it may be too late to question whether or not the revolution was in fact Islamic. What we can do, at least, is explore the revolution’s degree of Islamicness.

In Iran, like elsewhere in the world, often competing utopian political visions shaped the political landscape of the previous century. Marxism, nationalism and liberalism all played important roles in the 1979 revolution. Yet it was later branded “Islamic” with such insistence that this eventually became its sole adjective.

Most Iranians were religious, which positioned the clergy far ahead of any other political group in being able to mobilise the masses. The clergy benefited enormously from their highly effective religious network, which was both far reaching and fully under their control. By that time, the Pahlavi regime had severely weakened the organising capacities of Iran’s other political groups.

The consolidation of power 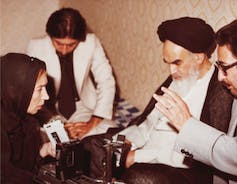 After telling reporters and other revolutionary leaders ‘the religious dignitaries do not want to rule’ in 1978, Ayatollah Khomeini ensured the clerics’ rule was unchallenged once in power. Wikipedia

After claiming a dominant post-revolution position, the clergy under then Supreme Leader Ayatollah Khomeini exploited their irreproachable reputation and religious bond with the masses to eliminate their rivals and consolidate their power. They converted Iran’s religious networks into permanent political platforms.

Mosques and other religious spaces and occasions were at the forefront of their propaganda machinery. Mosques were also – and still are – used as polling stations during elections.

The ruling clergy coupled the term “Islamic” with the revolution, calling it a “regime of truth”, to use Foucault’s terminology. More importantly, they impeded the emergence of a non-religious alternative to their peculiar political system. Over the past 39 years, no secular political group has been able to mount a formidable challenge to the Islamic Republic.

Instead, other religious forces have challenged the ruling clergy. They have done so both on the level of practical politics and by way of introducing viable alternatives to the ideal of the Islamic state.

The impetus for Iran’s most significant periods of political unrest in recent decades can be traced to the Islamic reformists. Examples include the reformist movement from 1997 until 2005, and the Green Movement, which emerged after the disputed 2009 elections.

The Green Movement brought the regime to the brink of collapse, and its religious ties were undeniable. Its leaders, Mir Hussin Mousavi and Mehdi Karubi – who are still under house arrest – are both religious figures who have always aligned with the Islamists. The colour green is a religious symbol, hence the name of the movement. 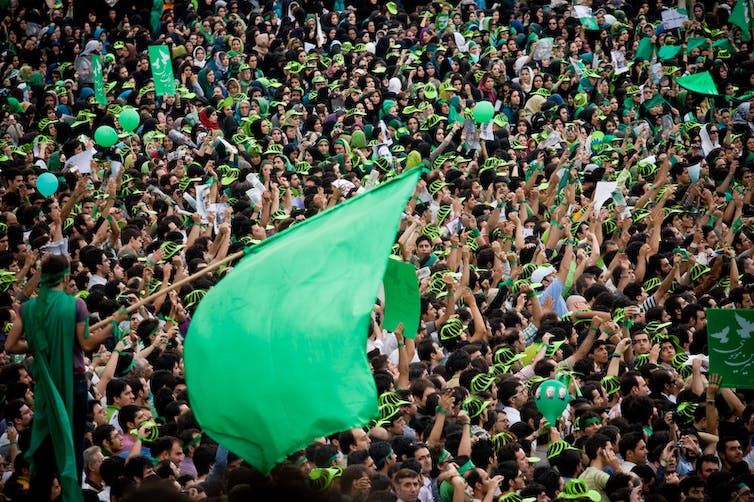 The leaders of the Green Movement, whose supporters are pictured at rally in June 2009, are still under house arrest. Wikimedia, CC BY-SA

A new politico-religious discourse is emerging that offers a viable alternative to the Islamic Republic. The Green Movement must still be understood within the broader “Islamist” school of thought, as it promotes a political role for religion. It is, however, unique in that it envisions this role as part of a democratic polity.

Islam lacks a blueprint for government

The reformist movement amounts to a direct backlash against the ideal of the Islamic state. It targets the foundational pillars of the Shiʿi model of the state, which is based upon Khomeini’s doctrine of wilāyat-i faqīh.

The reformists intend to strip away the ruling clergy’s proclaimed religious legitimacy. They maintain that Islam does not specify a blueprint for political matters and explicitly avoids providing economic, political, or policy prescriptions. The Qurʾān and many Ḥadīths support the notion that humans have the capacity to determine appropriate solutions for their worldly problems. 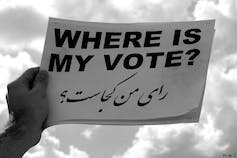 A sign at a June 2009 rally in Paris, France, bears the motto used in the Green Movement protests in Iran. Hugo/Flickr, CC BY-NC-ND

Thus, reformists argue that Islam should be actualised in politics through the political contributions of believers rather than the political leadership of the clergy.

Islam does not stipulate a model political system. This makes it impossible to extract the notion of democratic government from Islamic teachings.

However, one could argue that democracy is an appropriate political system for the Muslim world, based on human reasoning. For example, Mohsen Kadivar asserts:

Democracy is the least erroneous approach to the politics of the world. (Please note that least erroneous does not mean perfect, or even error free.) Democracy is a product of reason, and the fact that it has first been put to use in the West does not preclude its utility in other cultures – reason extends beyond the geographical boundaries. One must adopt a correct approach, regardless of who came up with the idea.

The religious backlash has been particularly focused on refuting two interconnected claims that form the existential grounding of the Islamic state. These are the claims of divine sovereignty and the necessity of implementing Sharīʿa, or Islamic law.

Iran’s ruling clergy argue that the divine right to political leadership rests not only with the Prophet Mohammad and Shiʿi’s Infallible Imāms, but also with Islamic jurists in today’s world. According to Khomeini:

God has conferred upon government in the present age the same powers and authority that were held by the Most Noble Messenger and the Imāms, with respect to equipping and mobilising armies, appointing governors and officials, and levying taxes and expending them for the welfare of the Muslims. Now, however, it is no longer a question of a particular person; government devolves instead upon one who possesses the qualities of knowledge and justice.

This assertion could be questioned on various levels. First and foremost, it offers a problematic reading of Islamic history. It ignores the reality that the Prophet Mohammad’s governance was a historical occurrence as opposed to a part of his divine mission.

In the same vein, many Iranian religious reformists repudiate the divine source of political authority, not only in the present, but also for the Prophet and Infallible Imāms. These interpretations of the revolution reject the possibility of claiming any sort of divinity in the political realm. This empowers believers to manage their political lives based on their collective rational reasoning.

The second major claim is that Islam is a political religion because Sharīʿa law encompasses important socio-political dimensions. Its proponents maintain that Sharīʿa ought to be implemented to its full extent, thus requiring political leadership by the clergy. 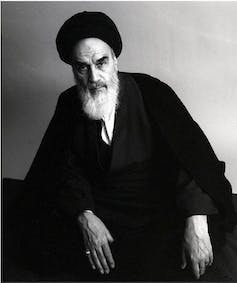 Once in government, Khomenei himself rationalised giving priority to political interests over religious considerations. Wikimedia

This was a founding maxim of Khomeini’s doctrine of wilāyat-i faqīh. But he revised this when he began running a modern state.

Soon after the revolution, Khomeini realised that implementing the many components of Sharīʿa would interfere with the basic tasks of government. In other words, he concluded that full compliance with Sharīʿa law would make it impossible for a state to effectively carry out its core functions and responsibilities.

His response to this predicament was to prioritise political interests over religious considerations. He went so far as to declare Sharīʿa as secondary to governing:

This was conceptualised as a Shiʿi jurisprudential principle called Fiqh al-maṣlaḥa (expediency-based jurisprudence). It establishes that a state is regarded as Islamic if the head of state is a jurist, a walī-yi faqīh, regardless of whether the state enforces Sharīʿa and Islamic precepts.

Open to the charge of exploiting Islam

Expediency-based jurisprudence leaves the fate of Sharīʿa ordinances, and by extension the entire religion of Islam, to the “personal” understanding of the ruling jurist. Unsurprisingly, it has been challenged for exploiting religion.

Critics say that decisions based on a rational assessment of the circumstances should not be tagged as “Islamic”. Attaching a religious tag to decisions made by the absolute authority of one person, who is not immune to mistakes and failures, will render religion responsible for policy mistakes and failures.

Ultimately, the lived experience of the government born out of the 1979 revolution proved detrimental to Islam. It led to the disillusionment of some Islamists who wished to emancipate religion from the state. As such, reformist discourse failed to propose a tangible alternative to the model of the Islamic state. This, in turn, could partially explain the resilience of the Islamic state in Iran.

Nevertheless, we should not overlook the powerful role of religious backlash in disarming the ruling clergy and delegitimising the theological foundation of the Islamic state. It remains the most formidable challenge to Iran’s ruling clergy to date.

Still, the possibility of a major shift in the country’s political landscape is more complicated and depends on factors far beyond religion-state relations.