On Monday night the Labor Party agreed to a federal government policy package intended to ensure the survival of the Murray-Darling Basin Plan.

The proposed amendments to the plan, and the complex technical details of water allocation, have been heavily scrutinised as a politically intriguing development in the long-standing contest between allocating water for the environment or for irrigation.

What is less appreciated is that, if implemented, the bipartisan commitment may do more to advance the water rights of Aboriginal peoples in the Murray-Darling Basin than any other government initiative in the history of the region.

Read more: We need more than just extra water to save the Murray-Darling Basin

Traditional owners of the Murray-Darling Basin have been told for too long that there is no water left for their needs. Our research estimated that Indigenous-specific water entitlements comprise much less than 1% of Australian water allocations.

The agreed measures include A$40 million for Aboriginal communities to invest in water entitlements for both economic and cultural purposes, a A$20 million economic development fund to benefit Aboriginal groups most affected by the basin plan, and A$1.5 million to support Aboriginal waterway assessments.

Read more: Millions of rotting fish: turtles and crays can save us from Carpageddon

Additionally, more support will be provided for the two representative Aboriginal water alliances, the Murray Lower Darling Rivers Indigenous Nations and the Northern Basin Aboriginal Nations. They have been struggling to have their claims for water rights heard amid the more influential concerns of the irrigation, environmental and scientific sectors.

These social justice measures are long overdue. Aboriginal rights are a blind spot in the country’s water governance arrangements and in its broader relationship with Indigenous peoples.

A history of dispossession

Australia’s pattern of inequitable distribution been entrenched at each juncture of water law reform: when rights to the use and control of water were vested in the Crown in the late 1800s, and again in the 1990s when Australian governments moved to establish a water market, without considering the implications for Indigenous peoples.

The National Water Initiative requires that Indigenous water needs are addressed, but the reality falls short. Until now little serious attention has been given to securing Indigenous access to commercially valuable water entitlements.

As a result, Indigenous people have been largely excluded from the benefits of government agreements that have created tradable entitlements and environmental allocations. A combination of narrow interpretations of customary rights to water, long delays around native title claims, discretionary terminology in the national policy, and the contentious nature of allocating water to “new” water users in the stressed Murray Darling Basin has precluded Indigenous access.

Read more: 'Tax returns for water': satellite-audited statements can save the Murray-Darling

With many parts of the basin fully allocated to water users with a history of access and entitlement, Indigenous communities in these regions remain greatly constrained in their ability to shape the use and management of water.

Since 2004, numerous government reviews and reports have noted that water plans, among other shortcomings, are failing to achieve Indigenous objectives. A 2017 Productivity Commission review referred to the needs of Indigenous peoples as the “unfinished business” of water reform. It shied away from recommending strong reallocation measures, however, on the premise that water for Indigenous commercial purposes “is separate from the provision of water for cultural purposes and is not addressed in the NWI”. 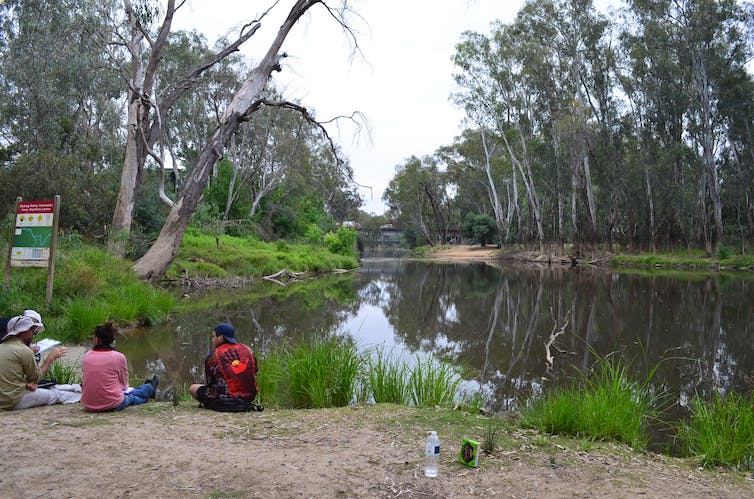 Members of the Waywurru Nation, with others, at the junction of the Ovens and King rivers, Victoria. Photo by MDBA

Indigenous Australians see clear connections between the past and present in accounting for the skewed distribution of entitlements and for the lack of control they are able to assert over water management.

Throughout the recent reform era Indigenous organisations and academics have recommended reallocation measures, such as a water trust facility, buy-backs or special purpose licences, but these have not occurred on any meaningful scale.

For example, the NSW Aboriginal Land Council put forward a proposal for a water trust when NSW reformed its water law in 2000. This would have allowed Aboriginal people to participate in the water market and allocate water to meet self-determined objectives. The proposal included a small levy on water trades to support costs, but it was not supported.

According to Indigenous lawyer Tony McAvoy, the government considered expenditure of this magnitude to be “reckless”. The water market was still developing and thought to be too volatile.

Environmental degradation has also eroded the capacity of the basin’s river systems to meet the needs of Indigenous people. Although many, including traditional owner groups, are gravely concerned about the environmental consequences of the bipartisan agreement, if implemented in full, it will represent a significant step towards water rights restitution in the Murray-Darling Basin.

Read more: It will take decades, but the Murray Darling Basin Plan is delivering environmental improvements

It is hoped that the experience of restoring some measure of water justice to the many Aboriginal nations of the basin will inspire Australian parliaments to pursue similar reforms for the benefit of Indigenous communities in the rest of the country.