The 13th season of A-League football concluded this weekend, with an unexpected Championship Grand Final in Newcastle between the Jets and Melbourne Victory. Victory prevailed by a single goal, securing its fourth title.

The Jets had rebounded from a last place finish in 2017 to reach the big dance under veteran coach Ernie Merrick. Their opposition was coached by Kevin Muscat, Merrick’s captain and protégé during his decade at Victory.

Read more: The genesis of soccer in Australia

In a very competitive season, the teams involved scored many good goals. But the own goals scored by Football Federation Australia (FFA) this year reflect soccer’s ability to damage itself, when it should be celebrating its success.

Both the men’s and women’s national football teams, the Socceroos and the Matildas, have qualified for their respective FIFA World Cups in 2018 and 2019. It is the fourth time in a row that Australia has reached the final of the men’s tournament, while the women have only missed one world cup since 1991.

Australia has the champion men’s team in Asia, while the Matildas only lost the recent final to perennial rival Japan by a single late goal after dominating the game. 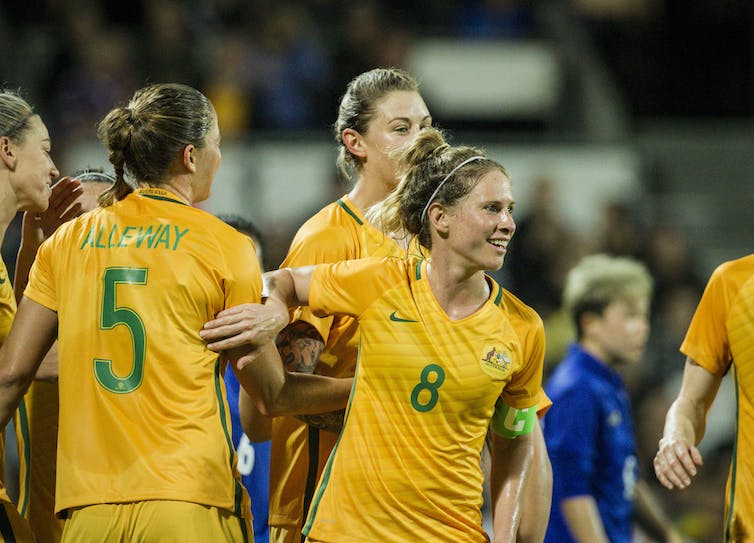 The Australian women’s soccer team has only missed one world cup since 1991. Tony McDonough/AAP

However, at club level, the best Australian teams have had mixed results against their Asian rivals. Games in the Asian Champions League have not resonated with Australian supporters since the Western Sydney Wanderers triumphed against the odds in 2014.

Australian club teams cannot compete financially with the powerhouses in Asia, but they could do more to draw the fans to home games and increase the profile of the competition in this country. The Asian Football Confederation also needs to allocate more resources to its competition and the clubs taking part.

Read more: Teflon tycoons and sticky-taped kits as club unravels – but you won't read about it in Jakarta

Meanwhile, the A-League competition has plateaued. Attendance at A-League matches has fallen for the fourth year in a row, though there are still over a million and a half people attending games. This compares with six and a half million at AFL games and three million at NRL matches.

Participation in football, particularly at young ages, is very healthy but translating youthful involvement into life-long support of A-League clubs remains an issue.

FFA, and other key groups within the game, have been distracted by arguments over the governance of the code for more than year.

There is a conundrum at the heart of the relationship between FFA and its A-League – should they be structurally separate, or was Frank Lowy, founding chairman of FFA, right to reject the advice of the Professional Footballers’ Association’s Report, the Kemeny Report and the Crawford Report and go for a unitary model with all that entails?

Almost all the A-League clubs have continued to lose money in the last decade, and several of them have been on FFA life-support for significant periods. Their owners complain they are prevented from generating sponsorship and other income by an unduly restrictive centralised policy.

FFA insists competition between the clubs and FFA in this area would result in conflicts that would undermine the precarious viability of the whole. The risk of an English Premier League-type breakaway by the clubs, which assert they are the lifeblood of the game, has been mooted on occasion.

The A-League clubs are at loggerheads with FFA over these issues. Meanwhile, FIFA is demanding FFA broaden the representation on its ten-member congress that determines FFA’s policies. Currently, the state federations have nine votes in total, while the A-League clubs have only one between them. The A-League clubs are seeking five votes, with votes also for the Professional Footballers Association, the women’s game and the referees.

The licence to participate in the A-League is not ownership of a place in the game, as is the case in the United States. This is a key issue identified by Matthew Hall, who has experience in both the USA and Australia:

Australian clubs are basically renters with a defined term. Why would you invest significantly in the A-League if you can legally be thrown out of the league when your licence is up?

But while football in Australia has its problems, it remains a significant part of one of the most competitive sporting environments anywhere in the world.

There are six codes of football alone, two of which are much stronger than the world game, if measured in political, financial, media and cultural clout.

Similar leagues in the USA and Japan had periods of struggle before reaching their present strong positions, so it is important FFA holds its nerve.