Moving to a future powered mainly by renewable energy will be crucial if we are to stay within the global warming limits set out by the Paris Agreement. But building all of this new renewable energy will initially require fossil fuels to help power all of the necessary mining, construction and decommissioning. This raises the question as to whether the energy transition itself will be pointless.

But new research by a group at UNSW (Bahareh Sara Howard, Nick Hamilton, Tommy Wiedmann and myself) shows that it is theoretically possible for Australia to move to a renewable energy future without blowing its share of the carbon budget.

Actually doing it will require two things: prompt, decisive action, and a reliance on “renewable energy breeding” – the process by which mining the raw materials and manufacturing technologies such as solar cells and wind turbines are themselves powered by renewables rather than fossil fuels.

This renewable energy breeding is already under way in some places. Tesla’s solar panel factory in Nevada, known as Gigafactory 1, will itself run on solar power. In South Australia, Liberty OneSteel, the new owner of the Whyalla steelworks, is planning solar power, pumped hydro, batteries and demand management to reduce energy costs and greenhouse emissions. In Western Australia, Sandfire Resources’ DeGrussa gold and copper mine and Galaxy Resources’ lithium mine are both going solar.

These are encouraging developments. But will they be enough? The world has only a limited emissions budget left to keep global warming below the Paris Agreement’s 2℃ limit, and an even smaller budget for the agreement’s more ambitious 1.5℃ goal.

As Australia is responsible for about 1% of global emissions and its electricity industry is responsible for about one-third of that, we have assumed that the country’s carbon budget for electricity generation is about one-third of 1% of the global carbon budget. Overall, then, this gives us a total carbon budget for Australia’s electricity sector of 3.3 gigatonnes of carbon dioxide equivalent (post-2011) for the 2℃ target, and 1.3 gigatonnes for the 1.5℃ target. For comparison, Australia’s annual carbon dioxide equivalent emissions are over half a gigatonne (actually 0.55 gigatonnes), so we are only three years away from overshooting the 1.5℃ target.

Even these budgets are generous, because Australia is one of the biggest per capita carbon dioxide emitters in the world and has enormous renewable energy resources.

What’s more, electricity is the easiest part of the energy sector to move to renewable energy – heating and transport are more difficult prospects. This means that if we are to move to an entirely renewable energy future, most heating and transport will need to be electrified. Therefore, electricity should have a greater emissions reduction target than other sectors.

Our study, which builds on earlier research, looked at 22 possible scenarios for transitioning Australia’s electricity sector to predominantly renewable energy. Some were developed by us, and some by other research groups.

Crucially, our study factored in the “life-cycle” emissions of these energy generation technologies – that is, the total greenhouse emissions including those released during the manufacture of the technologies themselves. And we looked explicitly at renewable energy breeding as part of that analysis.

Our scenarios also assume that overall electricity demand will either stabilise or decline, despite the move towards electrifying transport and heating. This is because Australia is well placed to make huge improvements in energy efficiency.

The principal findings of our research include the good news that the life-cycle greenhouse emissions from manufacturing renewable energy technologies such as solar panels and wind turbines are tiny, compared with the emissions saved by using them as substitutes for fossil fuels.

The bad news is that, in every scenario we investigated, Australia nevertheless fails to achieve its share of the ambitious emissions reductions needed to limit global warming to 1.5℃ with 66% probability. Furthermore, 9 of our 22 scenarios also fail the more lenient 2℃ target. 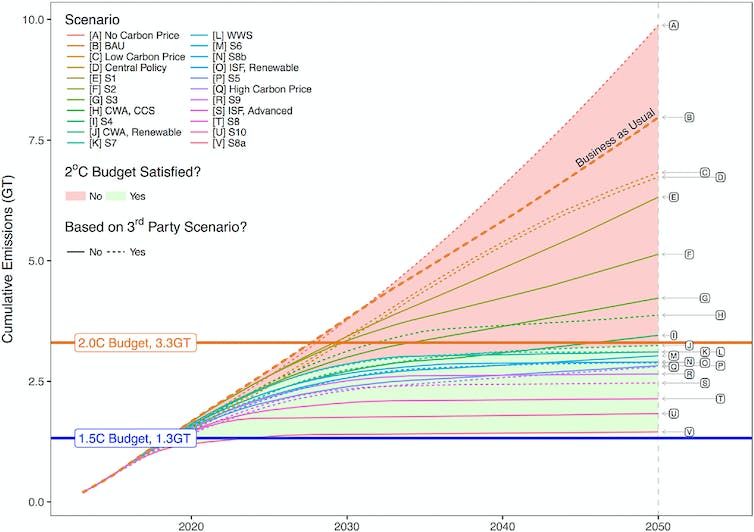 The main reason for this is the legacy of CO₂ emissions from fossil fuel use before the renewable energy transition. In most of our scenarios, the benefits of renewable energy breeding to the cumulative emissions become significant only beyond 2040.

The scenario (S8a, labelled V in the graph above) that comes closest to achieving the 1.5℃ target involves a 98% transition to renewable electricity and a 35% reduction in electricity demand by 2030 – a very rapid transition indeed!

The scenarios that deliver on the 2℃ target have rapid and high penetrations of renewable energy into the market, and high contributions from energy efficiency.

While it may already be too late for Australia to make a fair contribution to keeping global warming at 1.5℃, our results show that we can stay within our share of the carbon budget for 2℃ – provided we have the political will to move fast.

What’s more, if we implement policies that incentivise renewable energy breeding, there is no reason to suppose that moving to 100% renewable energy would necessarily entail a large increase in emissions to produce the necessary technologies.

But the overriding message is that time is of the essence, if we want to come anywhere close to limiting dangerous climate change. Our various scenarios suggest that even if we implement a rapid, effective response, we are likely to have to take CO₂ back out of the atmosphere in the future, to compensate for the likely overshoot on our share of the global carbon budget.