The First Australians were among the world’s earliest great ocean explorers, undertaking a remarkable 2,000km maritime migration through Indonesia which led to the discovery of Australia at least 65,000 years ago.

But the voyaging routes taken through Indonesia’s islands, and the location of first landfall in Australia, remain a much debated mystery to archaeologists.

Our research, published earlier this year in Quaternary Science Reviews, highlights the most likely route by mapping islands in the region over time through changing sea levels.

Some archaeologists have argued for an initial human migration into Australia through New Guinea. This is because islands across northern Indonesia are relatively close together, and people could easily see to the next island they wished to voyage to.

First landfall on Australia has been argued to be both more difficult and less likely than first landfall at New Guinea, as the final crossing distance from Timor to the continental shelf was more than 80km. It was also thought that the Australian landmass was not visible from any Indonesian island.

Despite this, it was proposed that now submerged islands off the Australian continental shelf were visible from Timor. But until recently, computer technology and ocean floor data sets were not developed enough to know for sure.

When people first migrated to Indonesia, reaching Australia by 65,000 years ago, they found a landscape that looked very different from today. During an ice age known as Marine Isotope Stage 4, which stretched from roughly 71,000 to 59,000 years ago, western Indonesia formed part of the Pleistocene continent of Sunda, while Australia and New Guinea were joined to form Sahul. 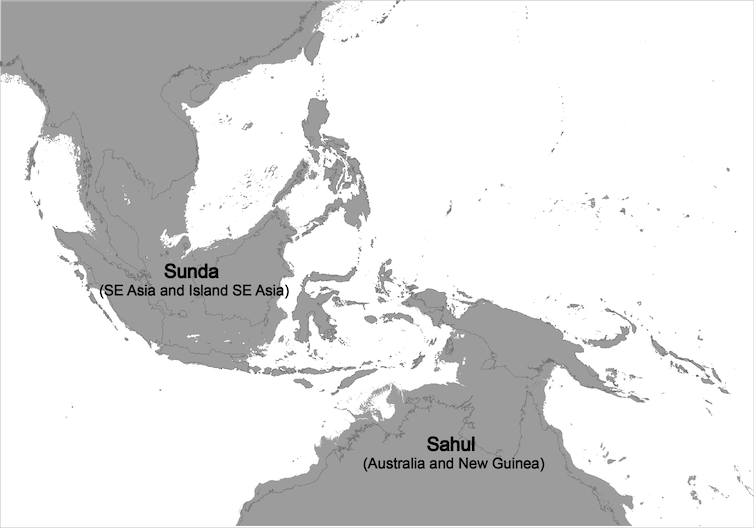 The grey area shows the extent of the ice age continents of Sunda and Sahul, much of which is now under water. Kasih Norman, Author provided

The rise in global ocean levels at the end of the last ice age at around 18,000 years ago flooded continental shelves across the world, reshaping landmasses. This event drowned the ancient continent of Sunda, creating many of Indonesia’s islands, and split the continent of Sahul into Australia and New Guinea.

This means that what is now under the ocean is very important to understanding where the First Australians might have made landfall.

Our new research uses computer analyses of visibility between islands and continents. We included landscape surface height data of regions of the ocean floor that were above sea level – and dry land – during the last ice age.

The powerful computer programs we used work out what a person standing at a particular location can see in a 360 degree arc around them, all the way to their horizon.

Running more than 10,000 analyses allowed us to pinpoint where people could see to, from any location on any island or landmass in the whole of Island South East Asia.

But because we knew that so many Indonesian islands, and so much of Sahul, were drowned at the end of the last ice age, we also included ocean floor (bathymetric) data in our analyses.

We discovered that in the deep past (between 70,000 to 60,000 years ago, and potentially for much longer), people could see from the Indonesian islands of Timor and Rote to a now drowned island chain in the Timor Sea.

From this island chain it was possible to sight the Australian continental shelf, which in the last ice age formed a massive fan of islands extending towards Indonesia. Much of this landscape is now more than 100m below the surface of the Timor Sea. 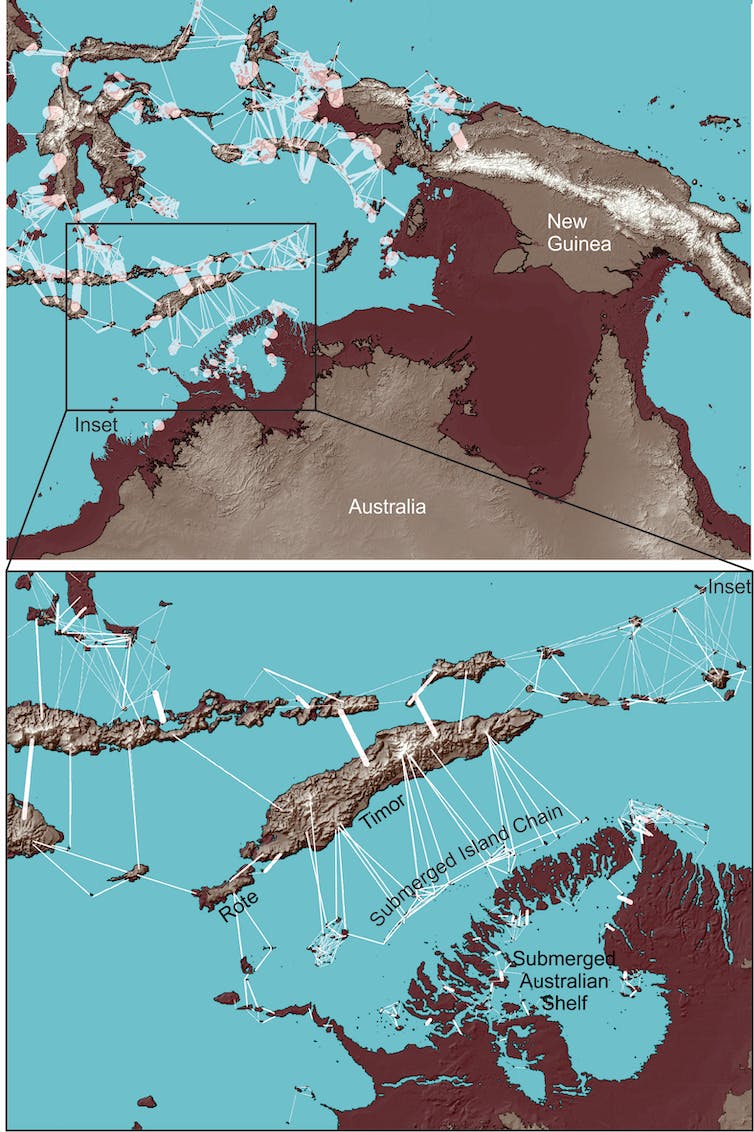 As the island chain sat at the midpoint between southern Indonesia and Australia, it could have acted as a stepping-stone for Australia’s first maritime explorers.

Including the areas of the ocean floor that were dry land in the last ice age means we were able to show that people could see from one island to the next, allowing them to island-hop between visually identifiable landmasses all the way to northern Australia.

These new findings potentially solve another mystery: all of the oldest archaeological sites for Sahul are found in northwest Australia. If people island-hopped from Timor and Rote they would have arrived on the now submerged coastline close to all of Australia’s most ancient occupation sites, such as Madjedbebe, Nauwalabila and Boodie Cave.

But while we might be closer to understanding where people first reached Australia, signs of the earliest explorers to reach Indonesia have been more elusive.

A team of researchers from the Australian Research Council’s new Centre of Excellence for Australian Biodiversity and Heritage (CABAH) and their partner institution, Indonesia’s National Centre for Archaeology, have now begun the search on Rote and West Timor for the earliest evidence of the region’s first human maritime explorers, the likely ancestors of the First Australians.