Home Affairs Minister Peter Dutton’s recent statements that Australia should open its arms to white farmers in South Africa facing “persecution” at the hands of a black majority government sparked national bemusement, international outrage, and rejection from members of his own government.

Dutton’s sympathy for white South Africans, who would “abide by our laws, integrate into our society, work hard [and] not lead a life on welfare”, has long historical roots.

This sense of mutual racial purpose in “white men’s countries” like Australia, South Africa and North America is located in a shared fondness for racial exclusion and segregation.

Proposed South African legislation that would allow the ruling African National Congress to expropriate land from white farmers without compensation to meet a modest target of 30% of farmland in black hands seems to have sparked Dutton’s benevolence.

Australia’s far-right has been reporting on white farmers being murdered in racially motivated attacks for some time, reprising a “white genocide” meme popular in alt-right circles abroad. Mainstream media outlets in Australia then adopted this narrative.

And when Australia federalised colonial immigration laws in 1902, the notorious dictation test, which quizzed potential immigrants in any European language, was in turn borrowed from Natal.

Australians and “Boers” (South Africans of Dutch descent, also known as Afrikaners) forged a sort of racial fraternity across the battlefield in the Boer War between 1899 and 1902. Australian light horsemen sent to fight in South Africa found themselves not all that dissimilar to their enemy.

As Australian soldier J.H.M. Abbott put it in a book on his exploits:

The [Australian] bushman – the dweller in the country as opposed to the town-abiding folk – … is, to all practical purposes, of the same kind as the Boer. [I]n training, in conditions of living, in environment, and to some extent in ancestry, the [Australian] and the Boer have very much that is in common.

Such sympathy – and a hatred for black South Africans, mirroring sentiments toward Indigenous Australians – extended well into the 20th century. Some of the 5,000 Australians living in Johannesburg in the 1900s, either war veterans or economic migrants, were instrumental in forming white-only trade unions modelled on those back home.

Australia and South African governments worked together in the 1940s to ensure their restrictive racial policies were beyond the reach of new international organisations.

Jan Smuts, South Africa’s prime minister between 1939 and 1948, was responsible for the inclusion of the term “basic human rights” in the preamble to the UN Charter.

Along with “Doc” Evatt, Australia’s attorney-general and the key author of the Universal Declaration of Human Rights, Smuts saw the idea of human rights not as “synonymous with political, social or racial equality” but as a protection of countries from the threat of further war and international encroachment.

The prominence of domestic jurisdiction became a central part of the UN Charter. This ensured human rights were not enforceable on – or even relevant to – individual countries. 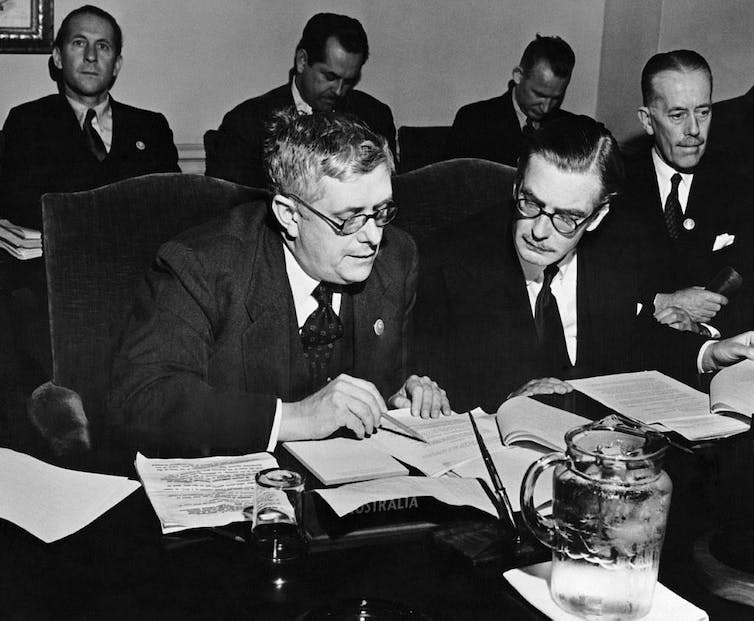 Apartheid, introduced in 1948 and modelled on Queensland legislation, entered public consciousness after the Sharpeville massacre in South Africa in 1960.

Decolonising African and Asian countries soon moved to have South Africa excluded from the Commonwealth of Nations. Australia’s prime minister, Robert Menzies, rejected such moves, standing alone in refusing to condemn apartheid. Instead, Menzies and his conservative successors advocated a stance of “non-interference”. They were fearful Australia would be the anti-colonial campaigns’ next target.

The 1970s and 1980s saw increasing protests against apartheid in Australia – particularly around the Springbok rugby tours in 1971. This period was also marked by efforts from conservatives to blunt the edge of an international sanctions campaign against South Africa.

Coalition prime minister Malcolm Fraser and his Labor successor Bob Hawke were strong opponents of apartheid. But the Coalition under John Howard in the 1980s joined with US President Ronald Reagan and UK Prime Minister Margaret Thatcher to do:

… everything it could to see that nothing was done to bring [apartheid] to an end. 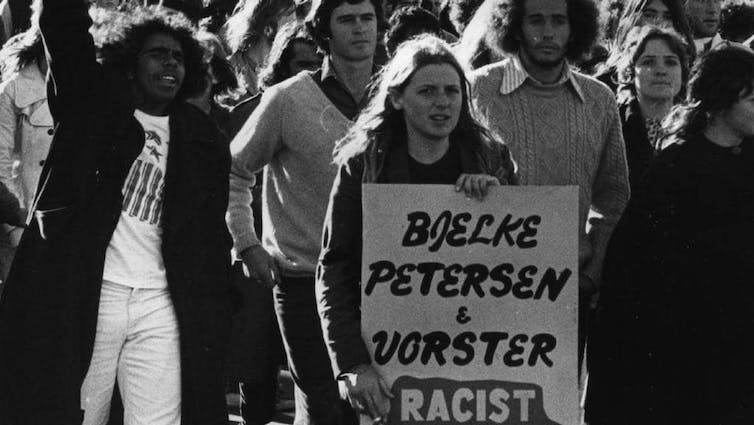 A protester against the tour of the Springboks rugby team in 1971. The Australian

The first arrival of what Dutton would now term “refugees” from southern Africa to Australia began in the 1980s. White farmers fled the democratic election of a black majority government in Zimbabwe in 1980, followed in the 1990s by a rush of South Africans “packing for Perth” after Nelson Mandela’s 1994 election and the abolition of apartheid.

Studies find these migrants feel victimised by the process of decolonisation and bad (read, black) government. Australia, which is yet to reconcile itself with the legacy of colonialism or offer meaningful participation in government to Indigenous people, must then appear to be an ideal destination.

Dutton’s call for “civilised nations” to rescue beleaguered white farmers draws explicitly on this long history of equating civilisation with a global white identity. This mental universe has dangerous ramifications for Australia in a world where the “global colour line” has disappeared.