Two plays about war, one utilizing children’s toys, the other blank verse. In many ways, they represent opposite ends of the military spectrum, the first, the oceanic filth of the kill zone, the second, the high-flown speechifying of the map room. Think of them as the walk and talk of armed conflict – Thucydides’ swords and speeches – which add up to war in its endless variety and monotonous aim: the defeat of one side, the triumph of another.

The Great War, by Dutch live-animation theatre company Hotel Modern and composer/foley artist Arthur Sauer, is billed as “creating a miniature WWI landscape live in the theatre accompanied by … sound and music … based on testimonies, diaries and letters written by soldiers who fought in the trenches”.

In assaying the bloody blot on human history that is the First World War, artists face two problems: the problem of scale, and the problem of repetition. So much happened, yet so much of what happened was the same thing, over and over again. The Great War rises to the first challenge by creating a micro register of perception in which small things viewed from tight angles (often around knee-height) communicate a disproportionate sense of titanic violence.

The means the company uses are strikingly simple. On either side of an open stage stand pens of garden earth, wherein the legs of soldiers (animators’ fingers, with plastic boots on their tips) grimly trudge through endless trenches. Above hangs a large screen, magnifying everything.

When washing up liquid and water are tipped into the pens, hey presto, there’s Passchendaele, in all its boggy horror. A little talcum powder becomes deep winter snow. Burning parsley becomes flaming fields and woods. All this is managed with an adept sense of how our minds remix information fed by our eyes - setting aside the knowledge that these are household items to freight them with profound significance and visceral power. 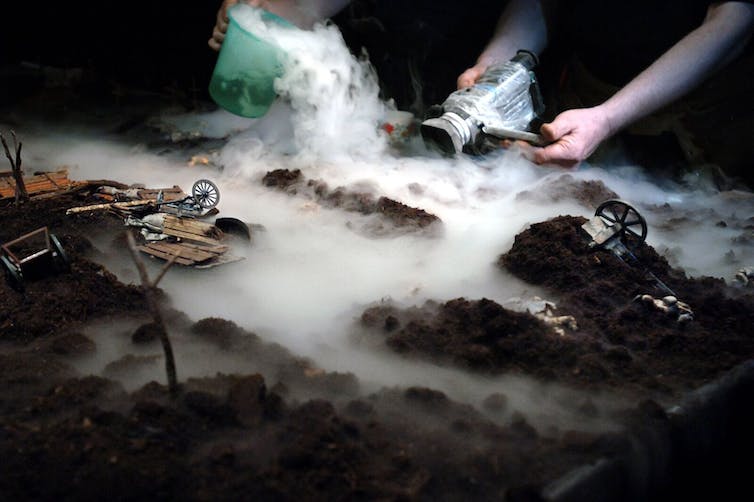 Hotel Modern meets the problem of representing so much death by scrupulous selectivity. A toy horse mired in the mud stands delegate for every horse that died between 1914 and 1918. This is the arc of disaggregation good drama invariably takes, carving from mass events the contours of singular lives. To tell one story is not to tell them all. But it reminds us of the difference between summary account and actual experience. Eight million horses died in World War I. Yet they died, as we all die, one by one.

There is nothing so visual as sound, and Sauer provides live music and aural effects, from furious bombardment to sucking swamp. Narration of the letters and eyewitness testimonials is also live, by one of the three animators. Her soft, singsong Dutch voice at first seemed at odds with the bloody tale she recounts. By the end, I thought it perfect – a child’s voice, almost, for a show drawing on the child’s realm to represent the horrors of the adult one.

A hundred years on, World War I remains a conflict that we still struggle to process, morally and intellectually. Technology makes war far worse, not only by rendering the killing more efficient, but by interpolating machines between our violent intentions and their fatal consequences: a cruel puppetry far, far less creative than the one this Dutch company uses to reverse the process, taking a cluster of machines and using them to reconnect us to the pity of war.

Read more: Memorial is a shattering excavation of the scars of war through poetry, dance and mind-blowing score

The gap between history lessons and the lessons of history is also the territory of Kings of War, presented by another Dutch company, Toneelgroep Amsterdam. It is a collage of five Shakespearean history plays: Henry V, Henry VI (parts I, II and III) and Richard III. Some readers may recall the Roman Tragedies the group brought to the Adelaide Festival in 2014. Kings of War has a similar high-altitude feel, of great events viewed from the unsteady perspective of leaders who believe they are in control of them.

At four and a half hours, this is not a production of the short-show-is-a-good-show variety. It takes time to achieve its full power. But it’s worth it, not only for the final crushing effect, but for the carefully wrought character and action details along the way. Modern theatre is so in thrall to the enfant terrible director it stands in danger of forgetting what mature drama feels like. Kings of War resounds with an emotional depth and insight that no work of youthful talent could convey.

Kings of War is above all a play about meetings; its achievement is to flip the medieval order of lordly precedence into one of modern bureaucratic maneouvre – the world of “suits”.

Through the boardroom, people come and go, standing at the back, arguing across the table, looking rumpled and slightly jaded. It is only later that certain items on the agenda show themselves to be terminal.

The set design is a concatenation of beige-coloured, all-purpose corporate spaces, some real, some virtual, some both. As with Hotel Modern, a large screen dominates the action, with a roving video camera showing a maze of anonymous corridors offstage, through which the Dukes-of-this and Queens-of-that endlessly trundle, having sex or killing each other.

When a King is crowned, a red carpet is laid out like a lizard’s tongue, and a perfunctory line-up of underlings occurs. The crown – object of perpetual power lust – briefly appears, hovering above another already weary head, then is whisked off, back to its glass cabinet. 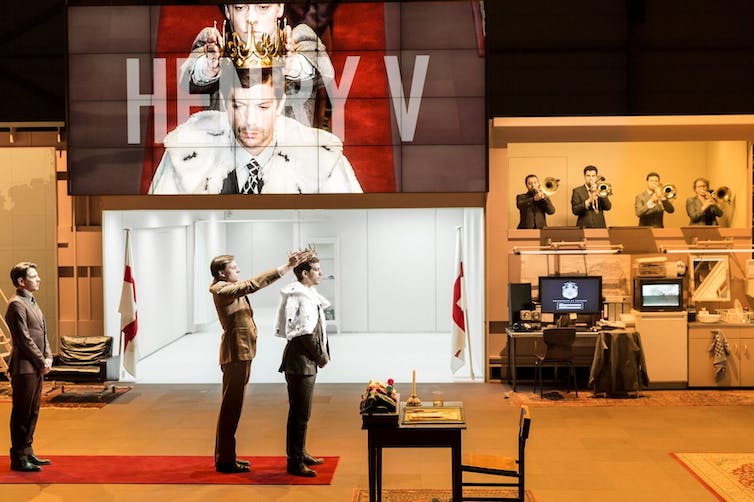 A red carpet is laid out like a lizard’s tongue and the crown hovers above an already weary head. Jan Versweyveld

Choreographically, the production is capacious, processional and cold. Carefully placed figures in a landscape, epic and removed, stand as though in a picture by the French painter Jacques-Louis David. The ensemble of 16 actors are uniformly brilliant, and it would be invidious to single any out for particular praise, though Ramsey Nasr as Henry V, Janni Goslinga as Margareta (Queen Margaret), and Hans Kesting as Richard III do impressive heavy lifting. A small group of musicians switch perfectly between brass, period vocals, and DJ sampling of contemporary rock and pop.

The 70 years between 1415 and 1485 are another bloody stretch of England’s past, another tranche of brutishness and butchery. I recently tried to make sense of it, going over the names, the attainders, the endless slaughter. Benedict Andrew’s Wars of the Roses at the Sydney Theatre Company in 2009 presented this history as a loop of murders. No sense to be had beyond the killing.

For Toneelgroep Amsterdam, the same plays are something quite different: a succession of betrayals – of power won and lost with a word or a poor decision. When the killings happen, they take place off stage and are beamed back on screen. Current methods are favoured, usually an injection of poison into the veins.

The result is that meaning and purpose re-enter the narrative frame. The problem with (civil) war is not that it is senseless, but that the reasons for it lie in the heads of a handful of leaders of immense power who think they know what they are doing but do not. And Shakespeare’s Wars of the Roses cycle takes this ultra modern, ultra dry, ultra political interpretation as a perfect fit. 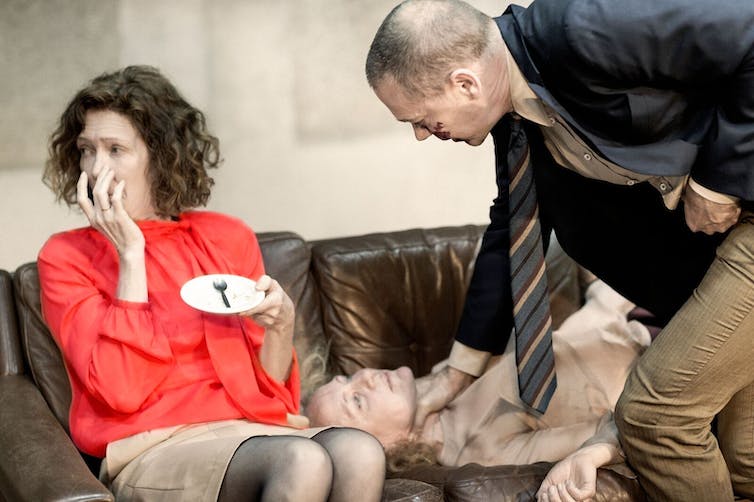 Killings happen off stage and are beamed back on screen. Jan Versweyveld

The final play, Richard III, is a portrait of an archetypal contemporary dictator: a sagging, middle-aged, narcissistic braggart, a thug who treats people with no more consideration than the furniture around him.

There’s the usual serial cursing, yet for Richard it’s water off a duck’s back. The road to hell is paved not by good intentions but a desire for control chilled and remote, until it bursts into sudden violence, like a rage-filled face in a blood-drenched dream.

All very familiar to a world like ours, busy collecting a new lot of tin-pot tyrants, old men kissing each other’s cheeks and arranging each other’s murders. “People don’t always think before they act”, Richard tells Queen Elizabeth, defending his indefensible record.

But, actually, they do: with a terrible, unwavering commitment to personal gain; to a death-filled logic; to a self-love that triumphs over every other goal and relation, almost over life itself. Only at the end does Richard doubt, seeing the faces of his past victims shimmer in the mirror that is his constant interlocutor.

Or maybe they are future victims. It is worth remembering that within 50 years of Shakespeare writing the last line of his play - “Now civil wounds are stopp’d, peace lives again:/That she may long live here, God say amen!” – England had once more descended into savage civil war.

The Great War and Kings of War were both exclusive to the Adelaide Festival.