The regeneration of inner-city areas is a global challenge. Inner cities in France certainly have their problems, but the nation also has a good record of successful major urban regeneration projects. We have analysed three of these initiatives to understand what factors contribute to good regeneration outcomes.

Urban regeneration can be defined as a holistic approach to revitalise under-used areas of the city. It’s commonly associated, however, with the related challenges of gentrification, rising property values, and displacement of low-income groups. And these projects do not always achieve a sense of place.

Read more: Sense of place: messier than it ever was, so how do we manage this shifting world?

French cities have much higher densities than Australian cities. For instance, Paris has 10,000 inhabitants per square kilometre, which is more than five times the population density of Sydney’s 1,900/km2. Higher density and more accessibility to public transport are important for successful urban regeneration. But this is not the only explanation for its success in France.

With the post-industrial society, new approaches are emerging to solve planning challenges in France. Since the nation began decentralisation in 1982, local authorities have gained more power to implement planning strategies.

At the same time, the multiplicity of urban stakeholders makes decision-making difficult. Since the 1990s, legal obligations to consult with residents have increased. Regeneration projects have to follow general planning principles but must also allow some flexibility to enable the local community to have an input. 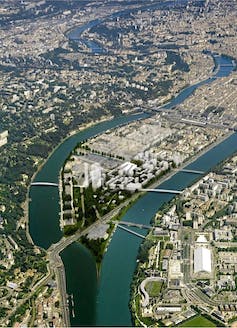 Lyon Confluence is the largest urban regeneration project in Europe with 150 hectares of land having been redeveloped since 2003. The project is led by public redevelopment company SPL Lyon. It is 89% owned by Greater Lyon, a metropolitan institution made up of 59 local authorities.

SPL Lyon is able to set up strict planning and urban design principles. Developers are required to integrate these principles into their designs to be part of the project.

SPL sells the land to developers at a fixed rate. Developers need to win design competitions to be part of the project and not just offer the best price for the land.

Lyon Confluence has attracted foreign investors, such as Japan’s NEDO, and became a model for smart positive energy buildings, which produce more energy than they consume.

The Île de Nantes regeneration project aims to transform a 337-hectare industrial area into a sustainable living and working environment. There is a strong emphasis on preserving the industrial character of the area. 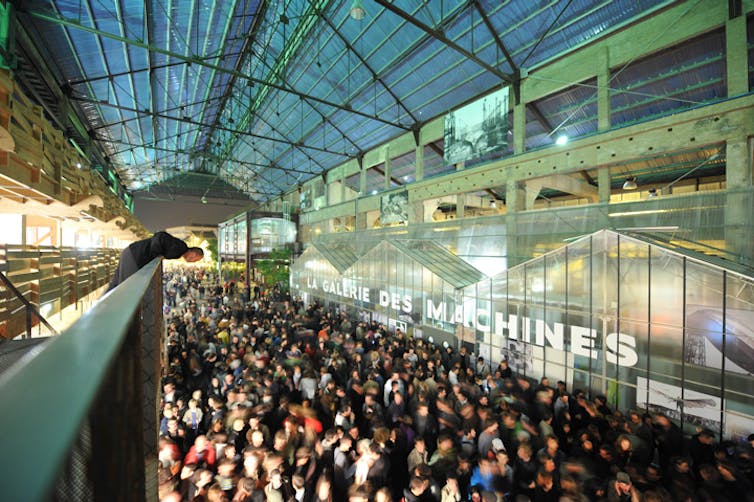 Another objective is to attract creative industries firms to a creative arts district to replace the local shipbuilding industry, which closed in 1987.

A public redevelopment company known as SAMOA oversees the Île de Nantes project, which will be completed in 2037. Innovative placemaking strategies are being developed to create a sense of place connected to the area’s industrial past. The project includes a lot of consultation with urban stakeholders.

The Paris Rive Gauche project is one of the most important regeneration project in the city. The 130-hectare site is located in the east of Paris, on the banks of the Seine. Paris Rive Gauche means Paris Left Bank and refers to the Paris of an earlier era. 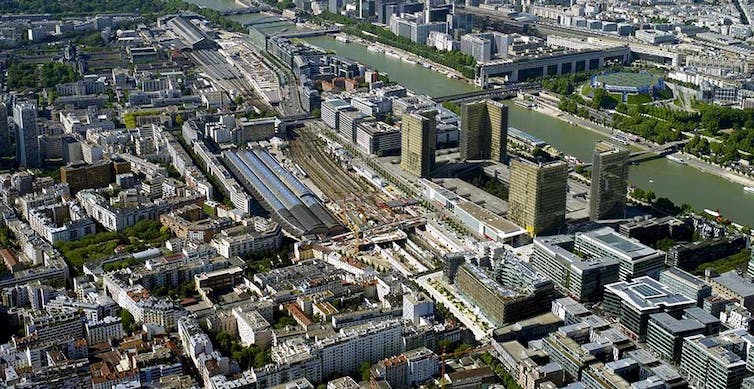 Work on the Paris Rive Gauche redevelopment began in the early 1990s and is now halfway through. The aim is to create a mixed-use neighbourhood around landmarks such as the national library and Paris Diderot University. Paris Rive Gauche

The aim is to redevelop industrial wasteland located around the Austerlitz train station. A publicly owned local development company, SEMAPA, manages the project.

The concerted development zone, or ZAC (zone d'aménagement concertée), was launched in 1991. Works included the construction of the François Mitterrand National Library (BNF), which began in 1991 and was completed in 1995.

Despite being overseen by one leading agency, the project is based on strong public involvement and the program has been modified. Powerful local associations went to court as there was not enough public space and the density was too high. In 1997, to prevent further revisions, SEMAPA developed a meaningful public involvement process to ensure the intentions of community stakeholders are incorporated in this large-scale project; developers are obliged to integrate these intentions.

The role of the development agency is to select developers through a competitive process to achieve the best design outcomes. Paris Rive Gauche is not just another business district like La Défense, but a real urban neighbourhood developed around existing urban landmarks. It combines a mix of uses (offices, housing, local retail and services, green spaces) and good access to public transport.

What do these projects have in common?

The three regeneration initiatives presented here are all led by a single development agency financed with public money. This type of governance allows for clear leadership, which is essential to complete projects with a 30-year lifespan.

Development agencies ensure through a public involvement process that these initiatives reflect local community aspirations. The creation of the ZAC as a planning instrument allows for the project’s objectives to be modified as it evolves.

Development agencies have the financial capacity to sell the land below market prices and to subsidise housing for low-income households. The French planning instruments and financing mechanisms associated with public involvement in decision-making contribute to successful urban regeneration. This approach is known as “transactional urbanism”, reflecting the increasing negotiations between the development agency and the community.

Authors: Sebastien Darchen, Lecturer in Planning, The University of Queensland