The appropriateness of Malcolm Turnbull’s trenchant criticisms of Barnaby Joyce’s “shocking error of judgement” and his announcement of a ban on ministers having sex with staffers has already been widely debated.

However, when he made those statements, Turnbull also raised much broader issues about the position of women in parliament that are worth discussing in more depth.

Turnbull acknowledged that there were “some very serious issues about the culture of this place, of this parliament” that involved gender.

He stated: “Many women … who work in this building understand very powerfully what I am saying”. Consequently, the old Ministerial Code of Conduct needed to be revised because it didn’t adequately reflect the values “of workplaces where women are respected”.

Turnbull went on to say:

I recognise that respect in workplaces is not entirely a gender issue, of course. But the truth is, as we know, most of the ministers, most of the bosses in this building if you like, are men and there is a gender, a real gender perspective here.

Turnbull is crafting an image of “protective masculinity”, of a fatherly protectiveness toward potentially vulnerable women, which he hopes will appeal both to social conservatives and feminists.

Leading Liberal Party social conservatives such as Scott Morrison have supported his ban. As has been pointed out, Turnbull’s position also references the challenging of conventional gender power relations in the workplace by movements such as #MeToo. (Though it should be noted that both some social conservatives and feminists may have reservations about the specific measures Turnbull advocates.)

Read more: Fischer calls for quick resolution of Nationals crisis, while Joyce is determined to fight to the death

It was an acknowledgement of gendered power relations in parliament that more socially conservative predecessors such as John Howard or Tony Abbott would have been unlikely to make. Indeed, Turnbull’s broader statements also raise feminist issues that may cause some tensions with social conservatives in the longer term.

For example, why, as Turnbull acknowledges, are most of the ministers in parliament male?

Turnbull was pulled up when he mistakenly claimed to have the most female cabinet ministers of any Australian government so far. It was pointed out that, at best, his record equalled Kevin Rudd’s, and that number has actually dropped since the resignation of Sussan Ley.

Indeed, Rudd had a higher percentage of female cabinet members – 30% compared with Turnbull’s initial 27% that dropped to 24% after Ley’s resignation, and to 22% when Turnbull expanded his cabinet from 21 to 23. Furthermore, there is only one female minister out of the seven in the Turnbull government’s outer ministry. 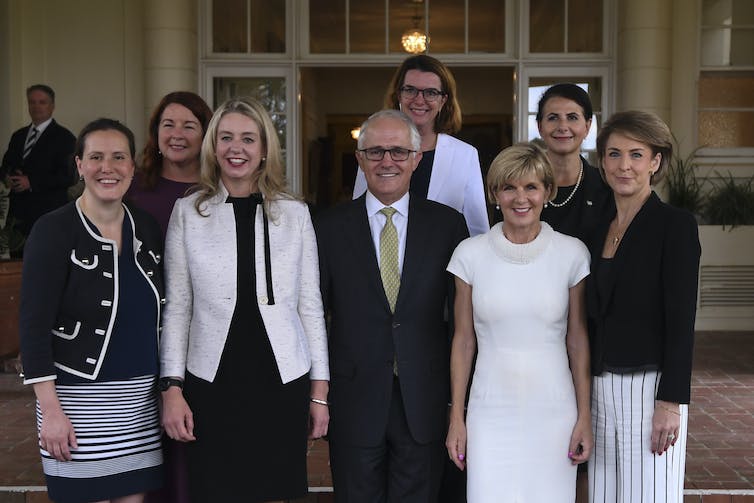 Turnbull should be praised for having both a female foreign minister and defence minister, since these are senior portfolios not traditionally held by women. Nonetheless, Peter Van Onselen has written tellingly regarding the apparent gender bias in Liberal cabinet selections, and the serious female talent that has been overlooked as a result, in both the Abbott and Turnbull cabinets.

Despite this, the situation has obviously improved markedly under Turnbull.

Julie Bishop has talked about her experience of being the only woman in Abbott’s first cabinet, and of how she’d put forward excellent ideas that were ignored, only to have a male colleague repeat the same idea and be lauded for it.

It was, she said, a form of unconscious bias that resulted in “almost a deafness”. Clearly cultural change and more respect for women in the workplace were needed there.

Women are seriously underrepresented among Liberal MPs. As of November 2017, only 22% of Liberal politicians were women (with Labor’s proportion then being 45%).

Consequently, it isn’t just the culture in ministers’ offices that needs changing. Some female Liberal politicians, such as senator Linda Reynolds, have drawn attention to the need for broader cultural change in the Liberal Party to ensure more female politicians are recruited and women’s abilities are recognised.

Some have even suggested that, given merit is clearly not being recognised in candidate pre-selection, the Liberal Party should consider introducing quotas like Labor has done.

Read more: How the Liberals can fix their gender problem

Parliamentary culture in general remains highly gendered, with women often bearing the brunt of sexist attitudes. The culture is also one that has often rewarded particularly macho conceptions of masculinity that can disadvantage some men as well as women.

No wonder women can become the target or collateral damage, often aided and abetted by highly gendered media coverage. The problems are not just confined to the Coalition, pervading most if not all parties, although some are doing better than others.

Indeed, while it has substantially increased its number of female politicians, Labor sometimes falls back on some of its old habits in regard to gender. These include appointing exceptionally capable female candidates to try to improve Labor’s image after male politicians have made a mess of things — a scenario that former premiers Carmen Lawrence and Joan Kirner knew well.

Think of Kristina Keneally replacing Sam Dastyari in the Senate – although at least she is guaranteed her spot, unlike Ged Kearney, who is faced with the difficult task of trying to retain Batman for Labor against the Greens following David Feeney’s departure.

However, clearly things are changing, and the gendered nature of parliamentary politics is under challenge. Turnbull’s acknowledgement of gendered power imbalances in parliament reveals that, even if he avoided discussing his own party’s contribution to them.

All states in Australia, other than South Australia, have now had a female premier, with some having had more than one. While Australia’s first female prime minister, Julia Gillard, regularly had her gender used against her, Australians will be watching the progress of New Zealand’s third female prime minister, Jacinda Ardern, with great interest. Perhaps, one day, we will even stop discussing her baby and her shoes.