Augmented reality, virtual reality and mixed reality headsets are gradually becoming more widespread. But the communal pleasure of video games is at risk when our friends disappear into solitary playing experiences that we can’t see.

Our research shows that there are solutions to this problem that could enable spectators to be involved in games, even if only one person has a headset.

Single-player games can be group activities

If you’re a fan of the Netflix series Stranger Things, you’ll know that some of the key scenes in season two involved the characters of the show playing video games in an arcade.

The star game of season two, called Dragon’s Lair, was a beautifully animated single-player cartoon game drawn by Don Bluth and played by the protagonists one at a time, as the other kids watched over the shoulder.

Another game you might have found in that arcade just a few years later in 1991 is one of the first commercial virtual reality games: Dactyl Nightmare.

In Dactyl Nightmare, the player donned a headset and wandered around a playscape, looking for and shooting pterodactyls. If you were lucky, the arcade would have two machines and you’d be able to play with a friend, each starting in a different part of the arena in VR Multiplayer.

But would the Stranger Things kids have played it? Perhaps not.

Read more: Oculus and our troubles with (virtual) reality

Dactyl Nightmare was a distinctly solo experience, where you disappeared into the headset immersed in a world beyond the arcade. Even if you were playing with a friend, you were in different parts of the game. Anyone not playing was unable to watch or participate, they could only stand there watching you wearing a headset and waving your arms around.

One could argue that in 27 years, not much has changed.

Watch as I enter a digital world you can’t see

Even though virtual reality has improved since the original Dactyl Nightmare – and augmented reality and mixed reality has arrived to supplement it – the underlying experience is still very solitary.

New devices such as the Microsoft HoloLens and other solutions by Microsoft promise to seamlessly integrate the digital and the physical world, but they also typically limit the vision of those digital objects to the person wearing the headset.

This has been acknowledged as a problem.

Some solutions, such as the proposed Facebook social VR system Spaces solve it by inserting multiple users into the experience using multiple headsets, and/or by having all those users inserted into a blended virtual world.

But few seem to consider the Stranger Things viewer aspect. That is, sometimes the viewer doesn’t want to be part of the experience, they just want to view what’s going on. A good example is the arena of eSports, where it’s reported by E3 that the industry for watching others play video games will accelerate from roughly $200 million in revenue in 2015 to $1 billion by 2018.

I don’t play football, but I still want to watch it

Given the emergence of AR/VR/MR as prominent new technologies to watch in 2018, we have been considering this problem in our work at The Mixed Reality Research Lab. As part of a paper we presented at the ASCILITE conference late last year, we proposed some solutions. 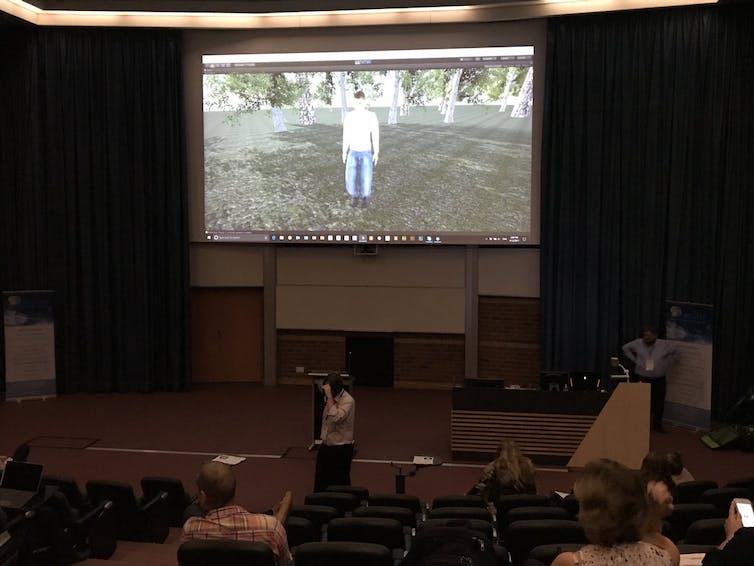 One option is to feed the view of the user to a third party screen, either in 2D or in another headset. Whilst this is possible (and often what is done today), it doesn’t give the spectator control of their own experience, and can actually make some people sick.

Read more: Virtual reality has added a new dimension to theme park rides — so what's next for thrill-seekers?

Another option is to recognise the role of a spectator in a simulation, and build the simulation to allow the spectator to be involved.

At it’s simplest level, this could simply be a passive interface into the world that the headset wearer is seeing. Imagine holding up your phone or tablet up to somebody wearing a headset, launching an app, and seeing from a spectator view all the digital objects they can see and are interacting with.

Microsoft has been experimenting with this using a HoloLens attached to a GoPro camera and a computer to generate a spectator view, but it’s still very much a hack. They’ve also looked at adding mixed reality to special SciFi “reality rooms”.

At a higher level, this could allow the spectator to participate in the simulation, possibly by providing them with some information that the headset wearer doesn’t have.

Read more: It's time to get ready for augmented reality

Imagine a variation on the popular game Keep Talking and Nobody Explodes where the spectators can use a secondary device to see the bomb but not touch it, requiring them to circle around and give directions to the headset user in real-time, which they need to execute straight away. This model separates the spectator and the user whilst still allowing them both to be involved in the simulation - no more standing there whilst somebody else waves their arms around.

Keep Talking and Nobody Explodes.

Most importantly, this means that the situation can be adjusted for whatever makes the most sense in the moment. That might mean everyone wearing a headset, but it might also mean one user playing the game whilst the others passively or actively interact.

And just like Dustin and his friends from Stranger Things, one good player and a bunch of spectators is fine, as long as you’re all having fun!