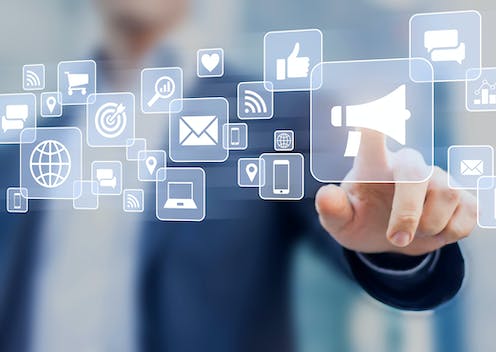 Many of the challenges faced by social media companies come down to failures of design.shutterstock.com

Facebook last week announced a redesign of its news feed to prioritise posts from friends and family over those of news publishers.

While struggling news organisations are likely to take a hit on their social traffic, the move suggests that...

Facebook last week announced a redesign of its news feed to prioritise posts from friends and family over those of news publishers.

While struggling news organisations are likely to take a hit on their social traffic, the move suggests that Facebook CEO Mark Zuckerberg has been paying attention to criticisms around issues such as fake news and adverse mental health outcomes.

In many cases, the biggest shortcomings of these technologies are failures of design.

There is often a disconnect between what digital designers originally intend with a product or feature, and how consumers use or interpret it.

Ethical user experience design – meaning, for example, designing technologies in ways that promote good online behaviour and intuit how they might be used – may help bridge that gap.

The furor over Twitter’s blue verification tick is a good example of the disconnect between business intent and user interpretation.

The Twitter community has taken the tick to signify an endorsement of a Twitter user and their tweets, or a VIP status symbol indicating power and recognition.

Meanwhile, the company says the tick is intended to authenticate and protect the voices of high-profile users who are vulnerable to identity theft by imposters.

The confusion has caused outrage among Twitter users who accuse Twitter of endorsing white supremacists who spread hate speech on the platform.

The popular meaning of this function has developed over time within the Twitter community through collective action and opinion, and it speaks louder than formal explanation released by Twitter.

If Twitter’s intention was to mark authenticity, then perhaps it shouldn’t have chosen a tick, which commonly symbolises correctness or approval.

The public continues to urge Twitter to rethink its user verification process. Although the company recently clarified its rules to ban or remove verification from users who post violent and abusive tweets, the verification issue remains unresolved in the eyes of its users.

Tweets deemed in breach of the new rules, but seen by Twitter as “newsworthy” (Trump’s nuclear button tweet, for example) show the continued confusion over enforcement of the rules.

User experience design and research has so far mainly been applied to designing tech that is responsive to user needs and locations. For example, commercial and digital assistants that intuit what you will buy at a local store based on your previous purchases.

However, digital designers and tech companies are beginning to recognise that there is an ethical dimension to their work, and that they have some social responsibility for the well-being of their users.

Meeting this responsibility requires designers to anticipate the meanings people might create around a particular technology.

I have been researching the everyday experiences of users on Twitter with my colleagues at University of Southern Queensland’s Digital Life Lab. Preliminary findings show that users perceive “grey areas” when they are confused about rules, etiquette or whether they are using Twitter correctly.

Contextually aware design is capable of understanding the different meanings that a particular technology may have, and adapting in a way that is socially and ethically responsible. For example, smart cars that prevent mobile phone use while driving.

Emotional design refers to technology that elicits appropriate emotional responses to create positive user experiences. It takes into account the connections people form with the objects they use, from pleasure and trust to fear and anxiety.

This includes the look and feel of a product, how easy it is to use and how we feel after we have used it.

Anticipatory design allows technology to predict the most useful interaction within a sea of options and make a decision for the user, thus “simplifying” the experience. Some companies may use anticipatory design in unethical ways that trick users into selecting an option that benefits the company.

The ethical design manifesto created by UK start-up Ind.ie describes technology that reduces inequality and benefits democracy, is functional, convenient and reliable, and is delightful to use. 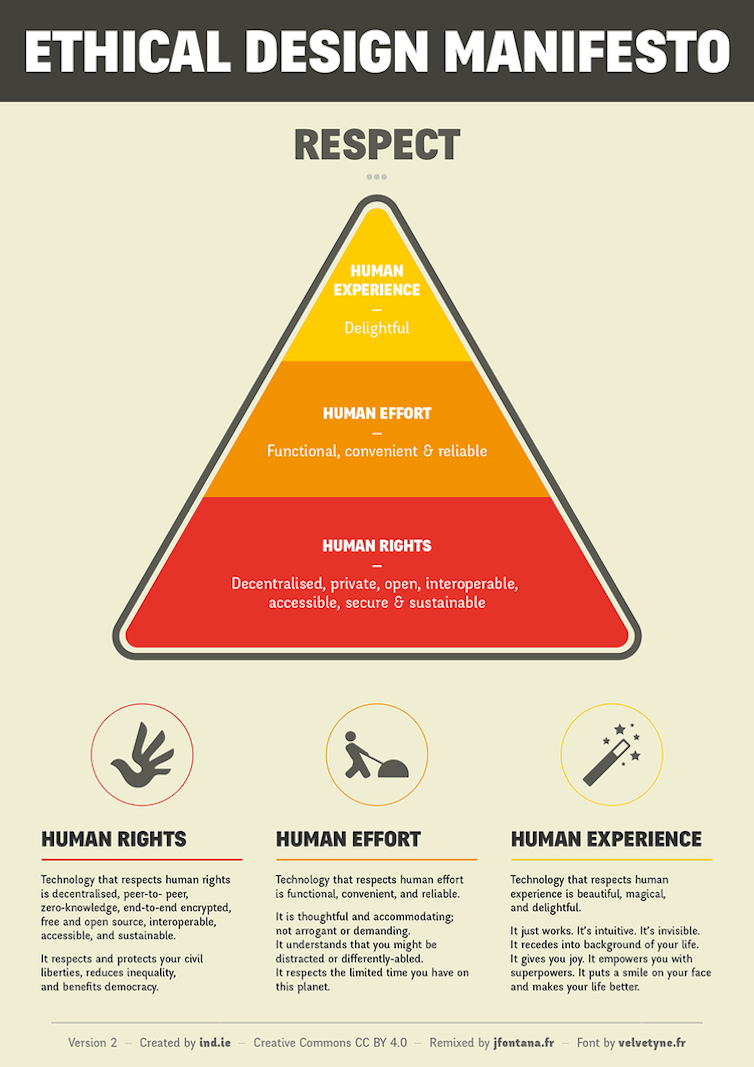 Ethical user experience design is a relatively new and complex area. Created by ind.ie and remixed by jfontana.fr, CC BY

Devices, websites and social networks designed with these elements in mind work for the benefit of the user. For example, if a teenager is overusing or oversharing on social media, a pop-up notification might prompt the person to exercise or meditate instead.

Read more: Does Apple have an obligation to make the iPhone safer for kids?

If tech companies don’t respond to these challenges, it could damage their brands and the trust consumers place in their products.

Working within newly developed ethical frameworks, there is a need for human roles within tech companies to monitor and respond to emerging popular meanings around their products.