A growing number of Australians live in apartments. The compact city model presents many benefits. However, living close to each other also presents challenges.

Rapid growth in apartment developments in recent decades has led to a rise in noise-related complaints and disputes across urban Australia. Households with children are on the front line of such tensions. They are one of the fastest-growing demographics living in apartments. Analysis of the latest census data show, for instance, that families with children under the age of 15 comprise 25% of Sydney’s apartment population.

Further reading: Contested spaces: living next door to Alice (and Anh and Abdullah)

Apartment design and cultural acceptance of families in the vertical city have not kept pace with this shift in housing forms. Cultural expectations that families with children ought to live in detached houses are persistent. Apartment planners and developers reproduce these expectations by neglecting children in building design and marketing.

With children’s sounds being difficult to predict or control, changing apartment demographics are an issue for planners and residents alike.

Trying to be good parents and good neighbours

My research explores the everyday experiences of families living in apartments in Sydney. It reveals that parents trying to make apartment life work face an emotional juggling act.

Apartment living often creates an emotional dilemma between being a good parent and being a good neighbour. Parents want to allow children to be children, but are ever anxious about annoying the neighbours.

Cities are layered with many different sounds, but the home is framed as a private space of peace and quiet. Sounds that intrude are considered noise. The “good” apartment neighbour avoids sounds that penetrate neighbours’ homes. 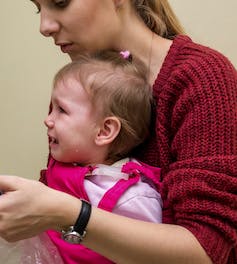 Complaining neighbours only add to the stress a parent feels when their baby cries. silentalex88/shutterstock

This is near impossible when children are involved (particularly when apartments are poorly designed). Key pressure points include crying at night and playing and running during the day.

Parents spoke about the challenges of sleep training in an apartment. They wanted to be considerate neighbours, so felt anxious and guilty when their children did not comply. Some received angry letters from neighbours, or heard them call out and bang on walls and ceilings in midnight protests.

One mother described the difficult juggling act of an unsettled baby and an upset neighbour:

[The neighbour] called out … ‘Pick up your baby!’ … I was so upset because we are trying our best and we were exhausted ourselves … [The neighbour] banged on the ceiling really loudly … I felt it on my feet, like it was shaking … That just kind of added to my stress … When I got back into bed after the shrieking finished and he [the baby] went back to sleep, and the stomping on the roof finished … I just said, ‘I don’t know if I can do that again’ … knowing that, you know they’re hearing it all of course, and we felt terrible.

Parenting anxieties were not limited to night-time. Monitoring kids’ play to minimise noise made parents feel like the “fun police”.

I always feel like I am constantly telling them ‘not in here, not in there, don’t do that’ … I’m constantly worried that we are annoying the neighbours. Because they are kids, they are loud. They don’t have a volume button.

Parents attempted many strategies for managing noise. These included putting down carpet and foam mats, restricting some activities to rooms without adjoining walls or to “sociable” hours, closing windows and covering air vents. The expectation that their children’s sounds do not belong in apartments weighed heavily.

When he [the neighbour] first started complaining, Harry [son] was crawling. Imagine trying to teach a crawler that they are not allowed to crawl through the house … You know, he [the neighbour] wanted the impossible and got angry with us when we couldn’t deliver that for him, with no kind of seeming effort to understand where we were coming from …

This family’s neighbour had written notes, aggressively banged on their walls and threateningly confronted the parents over their children’s noise. The mother described feeling vulnerable and at a loss:

I feel like we have entered this entirely new area of discrimination that I had no idea existed before, but is actually quite prevalent among our peers. It is common among the mothers in my mothers’ group … People just don’t like children and they don’t like children’s noise … And you know parenting is hard … So to have the ‘Oh my God I am pissing loads of people off’ in the back of your mind as well … is really uncomfortable.

While not all families reported such negative experiences, almost all felt anxious about noise and had stories of friends who had experienced problems.

The sounds made by children were always front of mind. Aware of their neighbours’ surveillance and (at times overt) moral judgments, they changed their domestic routines and modified their homes as much as possible.

People need apartments made for families

Broader changes are needed. Families living with children in apartments challenge norms that delineate the home as a place of quietude; that define “good neighbours” as tranquil ones; and that position children as belonging elsewhere (detached houses). And they come up against such norms in dwellings that hamper their best efforts to regulate sound.

Families living in apartments actively pursue strategies for making everyday life “work”. But there is only so much that individuals can change. The wider problem of apartments’ poor acoustic design and performance persists. Both cultural and technical norms must shift if the policy paradigm of urban consolidation is to have any hope of meeting the needs of a diverse population.

Further reading: This is why apartment living is different for the poor