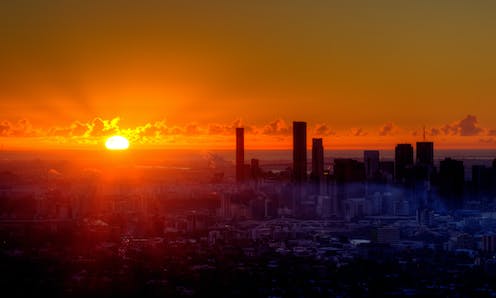 Australia is already baking in the long hot days of summer, and today brings the longest day of them all.

On December 22 we reach the summer solstice in the southern hemisphere, which means the Sun hits its maximum limit. The Sun will be at its highest and travel its longest path across the...

Australia is already baking in the long hot days of summer, and today brings the longest day of them all.

On December 22 we reach the summer solstice in the southern hemisphere, which means the Sun hits its maximum limit. The Sun will be at its highest and travel its longest path across the sky. 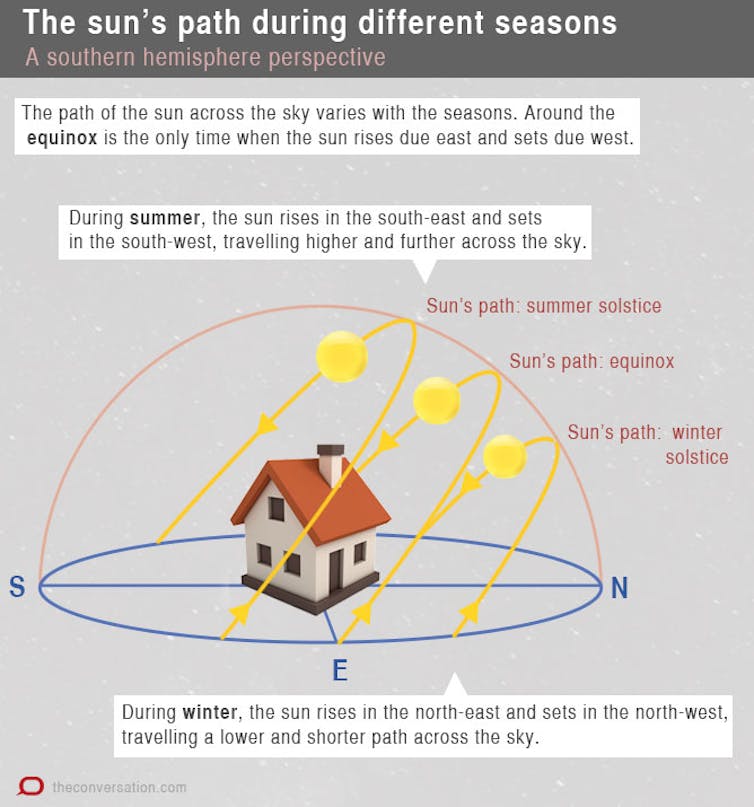 Throughout Australia, we’ll experience the longest day of the year. But it’s not just the longest day in terms of daylight hours. It’s also the longest day, counting from noon one day until noon the next. It just so happens that not all days are created equal – and of all the months, December is when we get the most value out of our days. Read more: Curious Kids: Does space go on forever? Daily fluctuations From a timing point of view, if you go by your clock or watch then every day is a standard 24 hours long (give or take the odd leap second). But a solar day is the time it takes for the Sun to return to due north (or local noon) each day and it varies across the year. 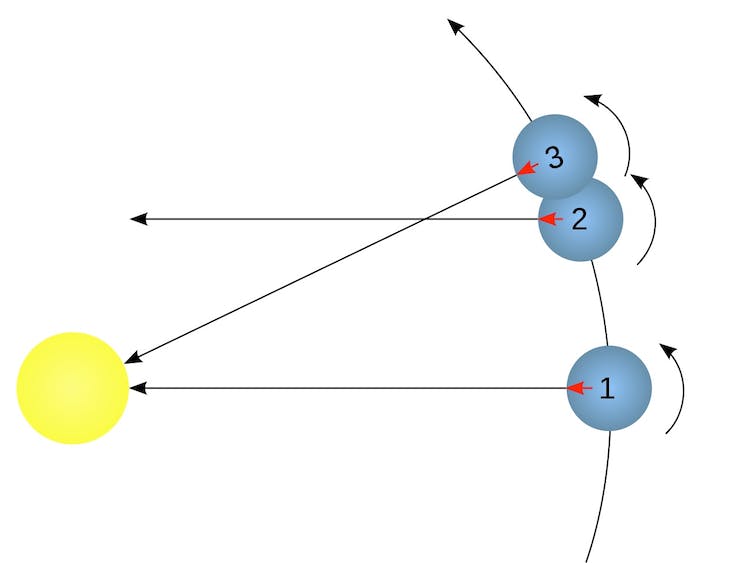 The extra minutes of the solar day: Position 1 - the Earth is pointing towards the Sun; Position 2 - the Earth’s completes one rotation; Position 3 - the Earth must rotate a little further to face the Sun again. Wikimedia/Chris828, CC BY-SA Imagine the Earth rotating on its axis, but as it does so, it also moves a little further along its orbit around the Sun. On average, the Earth needs to rotate an extra four minutes each day to realign itself to the noonday Sun. It so happens, that at the solstices (both summer and winter), the Earth has to rotate even more to bring the Sun back to due north. This makes the solar day stretch to more than 24 hours, as I’ve explained previously. 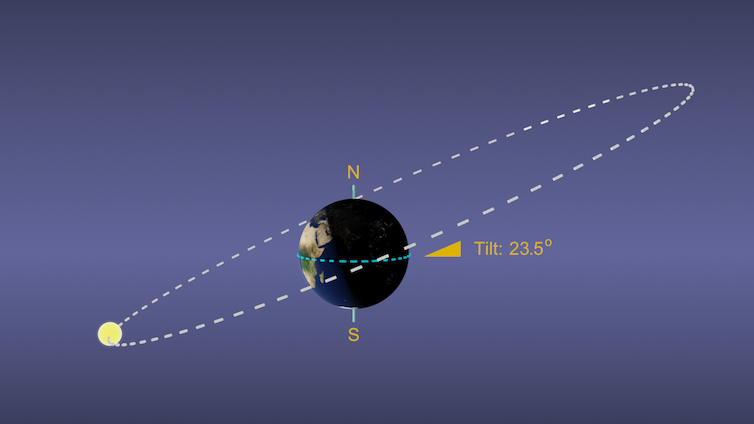 The solstices are best explained by imagining an Earth-centric view. Museums Victoria To summarise the point here, the solstices represent that moment in time when the Sun reaches its most northern or southern point. It’s easiest to imagine when you consider an Earth-centric view – instead of having a tilted Earth orbiting the Sun, we imagine that the Sun follows a tilted orbit around the Earth. Today’s solstice officially occurs at 3:28am (AEDT), which is the moment when the Sun reaches its southern-most point and starts moving northward. 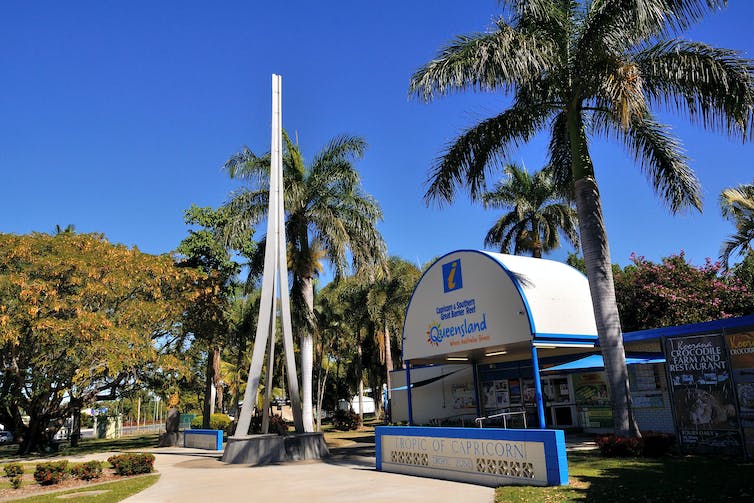 The Sun will be directly overhead today if you’re lucky enough to be anywhere on the Tropic of Capricorn such as the spire in Rockhampton, Queensland. Flickr/Philip N Young, CC BY-NC-ND As such, the solstices occur at the extremes of the Sun’s orbit. The Sun appears to stand still as it changes its north-south direction. Most of its movement is carried in the east-west direction or parallel to the Earth’s equator. In reality, it means that the Earth must rotate even further than average to realign itself with the noonday Sun and so the solar day is longer. Speeding up and slowing down So far we have only considered the tilt of the Earth. But the Earth’s orbit around the Sun is also slightly elliptical, which means the Earth isn’t always orbiting at the same rate. Kepler’s second law of planetary motion, tells us that the Earth will be moving faster when it’s closest to the Sun (at perihelion) and slower when it’s further away from the Sun (at aphelion). By coincidence, the Earth reaches perihelion on January 3, just after the summer solstice. That means right now, the Earth is moving at its fastest. It covers more ground during one rotation and therefore must keep rotating for longer to complete a solar day. Aphelion, or when the Earth is furthest from the Sun, occurs on July 4, just after the winter solstice. At that time of the year, the Sun is moving at its slowest and so the solar day doesn’t need to be quite as long because there’s less ground to make up. 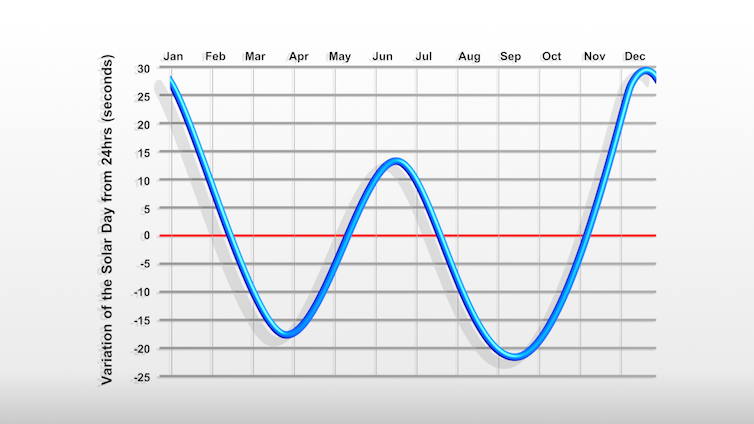 How the length of the solar day varies from 24 hours - it’s longer than average around the solstices and shortest at the equinoxes. Museums Victoria Admittedly the difference in a solar day is fairly small. At this time of year the solar day is 30 seconds longer than the standard 24-hour day. But that’s almost a minute longer than the shortest solar day, which occurs in mid-September around the time of the equinox. Read more: Why the sunrise is still later after the winter solstice shortest day It’s interesting to consider, especially in today’s world where we have become so detached from the natural rhythm of the days. Also for us in the southern hemisphere, it’s not so surprising that the longest day of the year happens in December. We already expect to have days bathed in daylight at this time of year. But spare a thought for the northern hemisphere where it’s the winter solstice and the tables are turned. Northerners spend most of the longest solar day of the year facing away from the Sun in the cold of a winter’s night.