WeChat is the most popular social media app in China. Since 2011, it has transformed from a messaging tool to an all-in-one super portal, with more than 900 million monthly active users. Its parent company, Tencent, is one of the most valuable technology companies in the world.

WeChat’s success has been powered by the platform’s mobile payment service, Wechat Pay, which assists with every aspect of a user’s life – from shopping for clothes and hailing taxis, to organising hospital appointments and ordering food deliveries.

Now, demand from Chinese tourists is increasing its uptake in Australia, and Australians are using WeChat too. Here’s what you need to know if you plan to use it.

China is the market leader in mobile payment

A recent study shows that 84% of people in China are willing and able replace cash with mobile payment. In 2016, 38 trillion Yuan (A$7.5 trillion) was exchanged via mobile payment – a sum 50 times larger than the United States, the world’s second biggest market.

As Chinese President Xi Jinping vows to make China a cyber superpower, Chinese tech companies are extending their ambitions to build a cash-free economy beyond the border. To date, WeChat has successfully launched its payment service in 15 countries.

Australia is a popular destination for Chinese tourists and students and it was one of the first offshore markets WeChat Pay targeted. In 2016, Chinese tourists spent A$9.2 billion in Australia, and this figure is expected grow to A$13 billion by 2020. 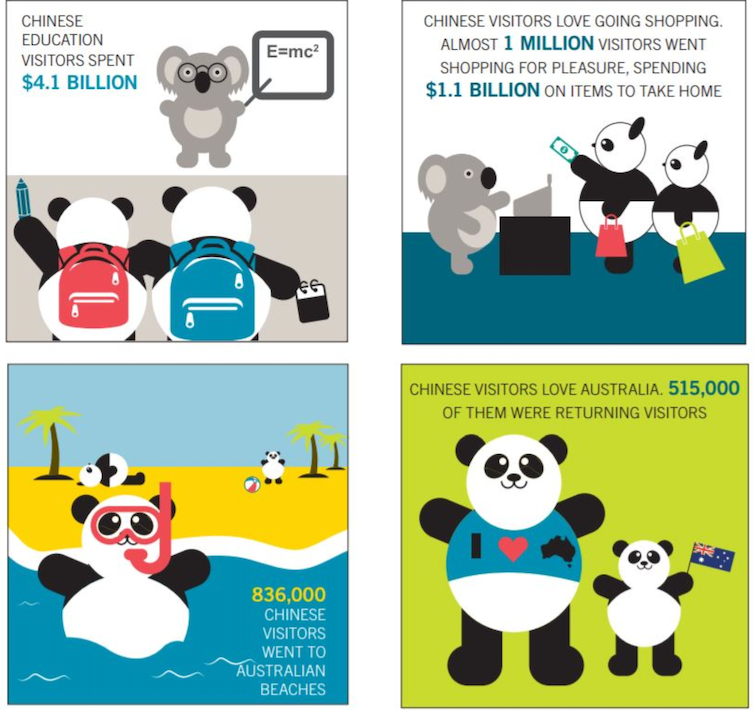 Due to the high demand in China for Australian-made baby formula and health supplements, a visit to a pharmacy to stock up is often on a Chinese tourist’s “must do list” when visiting Australia.

Exporting mobile payment to the world

At this stage, only customers with Chinese bank accounts can use WeChat to make payments, so the global push still largely relies on Chinese consumers. However, the app’s latest venture in Malaysia suggests the company is now planning to target overseas domestic users.

In late November, WeChat obtained an e-payment license in Malaysia that will allow locals to use Malaysian banks to pay. This will make Malaysia WeChat’s first offshore market whereby all of the platform services can be made available to local users.

Concerns about censorship and surveillance

Although the Chinese Communist Party urges its firms to expand into global markets, the party’s intimate relationship with China’s tech sector has made overseas consumers wary.

Tech products from China, such as affordable smartphones, are regularly accused of having security flaws and even claimed to be tools for government spying. In Early December, the Indian government reportedly blacklisted WeChat, together with another 41 apps, categorising them as spyware.

Although there is no firm evidence to prove that these products have actually been used for government spying, such suspicions are not entirely groundless. Beijing has a dark history of pressuring tech companies to assist with information surveillance.

Read more: China bans streaming video as it struggles to keep up with live content

One famous case was Yahoo’s complicity in Beijing’s persecution of two dissidents in the early 2000s. More recent reports suggest that private conversations on WeChat are sometimes monitored by the Chinese police.

Lately, under pressure from Beijing, Apple removed 674 VPN applications – tools that can be used to circumvent censorship – from its Chinese app store.

It is not unusual for internet companies to conduct censorship according to local law, but in a country like China the law can be used to persecute dissidents and activists. Arguably, tech companies are as much victims of the system as users. But as long as the party state controls their right to operate in the Chinese market, they will continue to make profit at the cost of users’ freedom of speech.

Tips for using WeChat in Australia

According to WeChat’s own claims, user data is not monitored or stored by the company, as long as there is no requirement from the Chinese authorities. However, Australian users should keep the following in mind:

Until tech companies are willing and able to stand up for the rights of their users, it’s important to educate yourself about what you’re signing up for.