Cycling bodies Bicycle NSW and the Victorian-based Bicycle Network want laws changed so that people over the age of 12 can cycle on footpaths.

We think this call is a symptom of the spectacular failure of Australia’s governing bodies (at every level from local through state and federal) to make our roads safe for cyclists.

NSW and Victoria are the only Australian states where the law stipulates that only children under 12 years of age and supervising adults can ride on footpaths. But they would not be campaigning for this change if they thought the streets were set to become safe for cycling in the near future.

Cycling infrastructure is not merely poorly thought out and therefore destined to fail. No, in fact, failure is its condition of possibility, because if it were otherwise it would fail better (as Samuel Beckett said).

What do we mean by this? It’s a matter of numbers.

Let’s take the case of allowing more bikes on footpaths. Pedestrian advocacy groups such as the Pedestrian Council of Australia are already rightly making the case that bikes are perceived as menacing by several sections of the ambulant population, such as the elderly and other walking-impaired groups.

The question that should be asked here is what is the capacity of our cities’ footpaths to take on more bikes? Could they handle twice as many bikes, five times as many, ten times as many?

The answer to this question will depend on location and the presence of footpaths in the first instance. In certain suburban areas it may well be the case that the footpaths can handle more bikes, but how about in the inner city? The Sydney CBD at 5pm? No chance. It would be a disaster. In other words, if this campaign succeeds, it contributes to the problem rather than solving it. 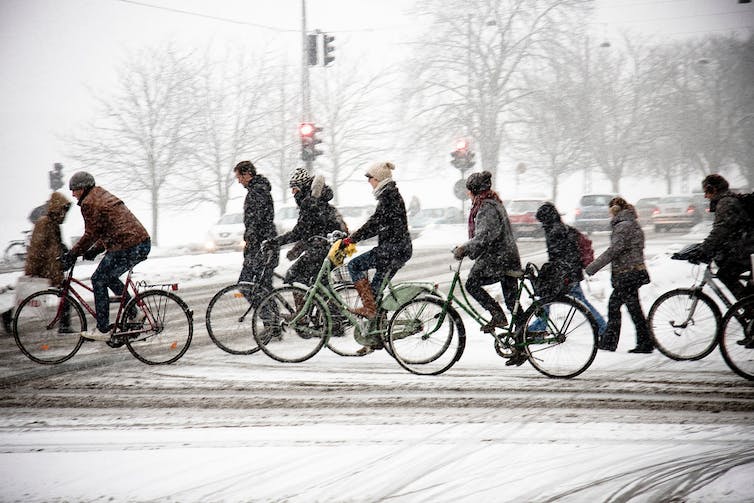 Nørrebrogade in Copenhagen - a street that attracts more than 40,000 cyclists per day, even in winter. Mikael Colville-Andersen/Flickr, CC BY-NC

Let’s look a different case: showers. Australia’s warm climate means that getting more people to cycle requires showers in workplaces. The reasonable enough assumption is that people will not want to be sweaty (read: smelly) at work. Showers are the obvious solution. But again, if we do the numbers, it only works if it fails.

If we take an organisation like a university with several thousand employees, how many showers does it need? If it has 20 showers and 100 people cycle to work in the morning that might just be enough, assuming that they don’t all arrive at the same time and don’t mind waiting a few minutes before taking their turn. But let’s say the university is successful in encouraging more people to ride to work. Those 20 showers would soon prove inadequate. At 200 people it would be unworkable, and even then it would still only be a small percentage of the people who commute to the university every day. In other words, this strategy only works when it fails.

Read more: People take to their bikes when we make it safe and easier for them

Let’s take one final example: the one metre rule. This rule, currently in place as a trial or as law in all states and territories except the Northern Territory and Victoria, requires drivers to leave at least one metre between the car and a cyclist when passing on a road with a speed limit of 60km per hour and below.

This seems sensible enough, and no cyclist would want less. But it also assumes that cars should always have priority. This is fine while cycling numbers are so low. In most instances, cyclists in Australia are on their own (weekend warrior pelotons excepted), so more often than not there is room for cars to pass.

Consider, however, if Sydney had actually achieved its stated goal for 2016 of 10% of all trips in the city being taken by bikes. This would mean 16 million trips of less than 10km every day (based on 2013 numbers). That would mean in the order of an extra 1.6 million bike trips. How well would the city cope then? Could cars continue to operate as though they had an absolute right to maintain their speed at all costs? The short answer is no.

The inner city streets of Sydney, for example, could not cope with both cars moving at speed and bikes riding three and four abreast and hundreds deep as happens in Copenhagen, which unlike Sydney has the cycling infrastructure and laws to cope with this. It would be carnage. As with the other two cases this strategy is predicated on failure.

Cycling strategies in Australia won’t succeed until policymakers start thinking about what success looks like and developing policy accordingly. Until then failure will continue to masquerade as success.