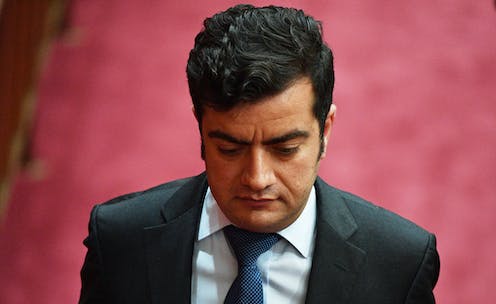 Labor senator Sam Dastyari is under renewed pressure to quit after allegations that he repeatedly pressed the ALP’s then foreign affairs spokeswoman Tanya Plibersek not to meet an advocate for Chinese democracy in 2015.

ALP frontbencher Linda Burney told Sky News early on Monday “It is now up to Mr Dastyari to consider his position … Sam Dastyari I’m sure is thinking very deeply about his role within the party.”

Shortly after, another ALP frontbencher, Catherine King, also said: “Sam needs to reflect upon his position”.

The new allegation comes after earlier revelations about Dastyari tipping off a Chinese benefactor who was of interest to Australian security services that his phone was likely tapped.

The latest report in the Fairfax media said that in January 2015, Plibersek went to Hong Kong. There, her meetings included one with Joseph Cheng Yu-shek, a prominent academic with Australian citizenship.

Dastyari “repeatedly attempted to warn Ms Plibersek that her meetings in Hong Kong would upset figures in the Chinese community in Australia” the report said. He left messages on her phone and contacted her office multiple times, it said.

But he was unable to reach her directly, because she had left her mobile phone at home for security reasons - although his messages were passed on to her, according to the report.

A spokesman for Dastyari said the claims were “complete rubbish”.

The latest claims against Dastyari, which appear to have come from within Labor, are thought to be part of an effort to get him to resign from the Senate.

Dastyari’s links with China have become a severe embarrassment to opposition leader Bill Shorten. The government is relentlessly pursuing Shorten over them. After it was revealed that Dastyari alerted Chinese businessman Huang Xiangmo about his phone being probably tapped, and audio emerged of Dastyari reflecting China’s line on the South China Sea, Shorten stripped him of his position as deputy opposition whip in the Senate.

Labor cannot force him to resign from the parliament - it could only throw him out of the party. But any move against him by Shorten is complicated by Dastyari being a leading member of the New South Wales right, whose support Shorten needs.

Plibersek’s office has consistently declined to be drawn about Dastyari’s representations. Rumours about these have been circulating in Canberra for some time.

A spokesman said Plibersek’s “itinerary in Hong Kong, including a meeting with a prominent pro-democracy activist, went ahead precisely as scheduled - I think that speaks for itself”.

The Fairfax story put forward “one suggested explanation” for the Dastyari representations - that he contacted her office following an inquiry from a Sydney Chinese language media outlet, which was preparing a critical story on her meetings.

Immigration minister Peter Dutton accused Dastyari of being “a double agent”, saying “he can’t be in the Australian Senate and it is important that Linda Burney has called for him to go and now Bill Shorten should do the same.”

The latest controversy around Dastyari comes days after the prime minister introduced into parliament legislation to combat foreign interference in Australian politics. The government and the security agencies have become increasingly alarmed at the growing scale of this intervention.

But the new legislation, which includes a register for those lobbying for foreign governments and businesses, has sparked an angry backlash from China. It has also been criticised by former trade minister Andrew Robb, who now works for the Chinese company Landbridge Group.