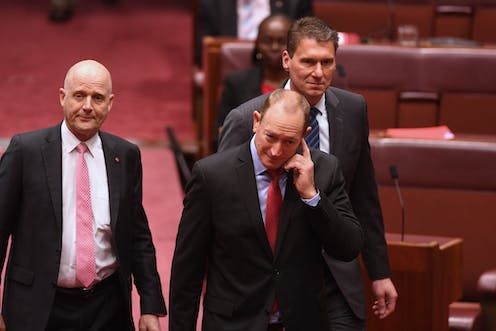 Pauline Hanson has lost one of her four Senate votes, in a dramatic blow-up with the man she unsuccessfully pressured to step aside to allow Malcolm Roberts back into the parliament.

On Monday, Queensland’s Fraser Anning replaced Roberts, who was declared ineligible by the High Court because he was a dual British citizen.

But just before he walked into the chamber to be sworn in, Anning flagged he would sit as an independent.

Anning later declared he had not left One Nation – it was Hanson who had kicked him out.

The setback for Hanson comes as One Nation’s vote is apparently surging in the Queensland election. Polling published in The Courier-Mail at the weekend showed strong support for One Nation in various regional and urban fringe seats with a vote of more than 20% in some, although it would not have won any of the seats on the figures.

The Anning defection follows weeks of tension with Hanson and her adviser James Ashby, and a bitter clash at the One Nation party meeting on Monday morning.

Hanson said in a statement that before the High Court decision she had tried to speak with Anning while he was overseas, but her efforts “fell on deaf ears”. She’d had to communicate through his brother Harry instead.

She had indicated to Harry Anning “that given the work Malcolm Roberts had achieved as chair of the banking inquiry and his role in challenging climate change, it would be in the federal party’s and Australia’s best interests” for him to be returned to the Senate.

Anning had made no attempt to contact her or any One Nation executive members after multiple requests to discuss his plans, she claimed – something Anning disputes. “Instead he chose to release scathing media releases demanding I pledge my support to him without even meeting or speaking to him,” she said.

The statement said Anning only spoke with Hanson on Monday morning “but those talks quickly failed when she refused to allow several Anning staff into the party meeting. The staffers had formerly worked for Roberts and she would not have them at the meeting "because of their disloyalty to their former employer and myself.”

Anning then walked out of the meeting.

One Nation senators Brian Burston and Peter Georgiou sought to mediate, but they were told “only minutes before he was sworn into the Senate” that Anning would sit as an independent, Hanson’s statement said.

Anning had a different version. He said he had been verbally attacked in the partyroom. “This was profoundly shocking to me as I had been a friend and supporter of Pauline for over 20 years … the attack was so vitriolic that I was obliged to simply walk out.”

He said Burston and Georgiou had told him Hanson demanded he not employ the staffers – he had said this was unacceptable. He believed these demands were actually coming from Ashby, “who had previously conducted a witch-hunt against anyone he thought supported me, and it was he who had turned Pauline against me”.

At the last minute, Anning’s office asked Liberal Democrat David Leyonhjelm and the Australian Conservatives’ Cory Bernardi to escort him for the swearing in, which his One Nation colleagues had been due to do. Anning said Hanson had told the One Nation senators not to do so.

“The next thing I knew, I saw on the TV that I had supposedly become an independent. This was news to me!

"It seems that without even contacting me, Pauline has unilaterally kicked me out of her party,” he said. “I have to say I’m stunned.” He said it was “simply false” to say he’d left One Nation. “If I’m no longer a One Nation senator, it is because Pauline has expelled me by press release.”

Hanson’s statement said she believed former employees of Roberts contacted Anning several months ago, encouraging him to move to Bernardi’s party if Roberts lost his seat.

She said before Roberts came under the citizenship cloud she had asked Anning to contest the state seat of Gladstone, but he dismissed the request on the grounds he and his wife were moving permanently to the US.

Leyonhjelm said Anning told him on their way into the chamber that he wouldn’t be sitting as a One Nation senator.

He had been aware of the tensions earlier but had been told by a One Nation senator at the weekend that all was well with Anning.

Asked if Anning might join the Liberal Democrats Leyonhjelm said he had not spoken to him about that. Anning would have to be comfortable with the party, he said.

Roberts is running for a seat in the Queensland election.