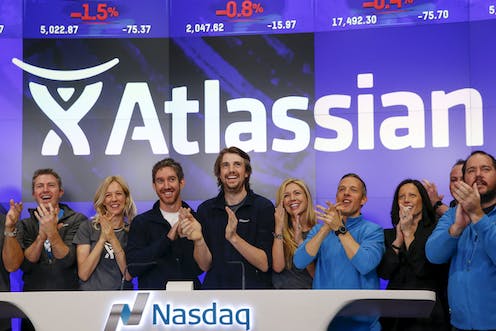 There is a degree of mythology in the tech world surrounding people who have worked in Silicon Valley.

As the birthplace of computing and tech giants like HP, Apple and Google, there is a view that the best developers come from companies located there even though 90% of software developers in the US actually work elsewhere.

According to Australian-made but internationally renowned tech company Atlassian, the skills it needs can only be found from deep in the heart of the Silicon Valley - and not in Australia.

Atlassian co-founders Scott Farquhar and Mike Cannon-Brookes have argued that Australia needs to keep schemes like the 457 visa to enable companies like theirs to bring workers from the United States because they can’t find them locally.

The irony of this is that the founders were reportedly University of New South Wales dropouts. Neither finished a degree before founding a company that is today worth nearly US$12 billion (A$15.62 billion). And they achieved all of this in Australia with no previous tech experience.

About 250 of Atlassian’s 1,000 employees in Australia are on 457 temporary migration visas. The justification for this has been that it is easier to get senior staff with 10 years’ experience from Silicon Valley than it is to find them locally, or train them from existing domestic staff.

If indeed all of the 457 visa staff are senior members of Atlassian, it would represent a very high ratio of senior to junior staff.

From the company’s short-term perspective, it is obviously better to hire experience that somebody else has invested the money to develop - rather than spend that time, effort and money themselves.

All of the jobs advertised currently by Atlassian are for “senior” staff. There are currently no advertised positions for graduates on the Atlassian site in Australia.

From Australia’s employment market perspective, such preferencing denies graduates and entry-level workers the opportunity to get started in the workforce and to develop those skills and experience domestically rather than abroad.

The challenges for graduates entering the local workforce are highlighted by the Australian Department of Employment, which has reported that for IT graduates, full-time employment has become harder to find than it was in 2008.

One of the factors that the Department blames for this is the “increasing reliance on the use of 457 visa holders by businesses”. An example of this is the NSW government, which was accused of bringing in Indian IT workers as part of its outsourcing service ServiceFirst that provides human resources and payroll services.

Read more: The startup employment dream – the pros and cons

The perceived, and real, prospects for IT graduate employment have driven a massive drop in enrolments in IT degrees from a peak in 2002. The run up to 2000 was the time of the Dot-com Bubble where the rapid rise and success of tech firms, even in Australia, was being highly publicised.

When that bubble burst, it left a supply of graduates that have been absorbed into the market with a rapid decrease in interest in pursuing careers in the IT sector.

IT degree completions for domestic students in Australia are about 60% of the levels of their peak in 2003 and are increasing only slowly.

The threat posed by government changes to the 457 visa system have been largely overblown.

IT-related jobs are still covered by the 457 visa’s replacement, the Temporary Skills Shortage (TSS) visa. The changes are unlikely to have any impact on the employment of IT staff for companies in Australia, including tech firms like Atlassian.

The comments from tech firms when there are any threatened changes to this system can reflect their own self interest in satisfying their business priorities in getting talent as easily as possible.

These companies’ social concerns for the development of the local workforce are often secondary to their interest in maximising profits. This in part comes down to the concerns of shareholders who, in Atlassian’s case, are based in the US as it is a US-listed company.

Companies like Atlassian and other tech firms that operate in Australia could be doing far more to develop experience in the local workforce by scaling up their efforts to offer internships and graduate entry programs from Australian universities.

This is standard practice in other industries but this approach has not been adopted by the tech companies. Instead, tech companies largely rely on graduates applying directly to them for jobs.

Universities teaching computer science and software engineering normally take guidance from industry to shape the content of the curriculum. Usually, the computer languages and technologies taught follow the requirements of the companies that engage with these programmes.

By not engaging with universities across Australia, tech companies like Atlassian are potentially missing out on graduates being trained to meet their needs. The energy being expended on defending the need for temporary skilled worker visas would be better spent on cultivating and providing opportunities for the workforce available on their doorstep.