We have discovered a new species of orangutan – the third known species and the first new great ape to be described since the bonobo almost a century ago.

The new species, called the Tapanuli orangutan (Pongo tapanuliensis), has a smaller skull than the existing Bornean and Sumatran orangutans, but has larger canines.

As we and our colleagues report in the journal Current Biology, the new species is represented by an isolated population of fewer than 800 orangutans living at Batung Toru in northern Sumatra, Indonesia. 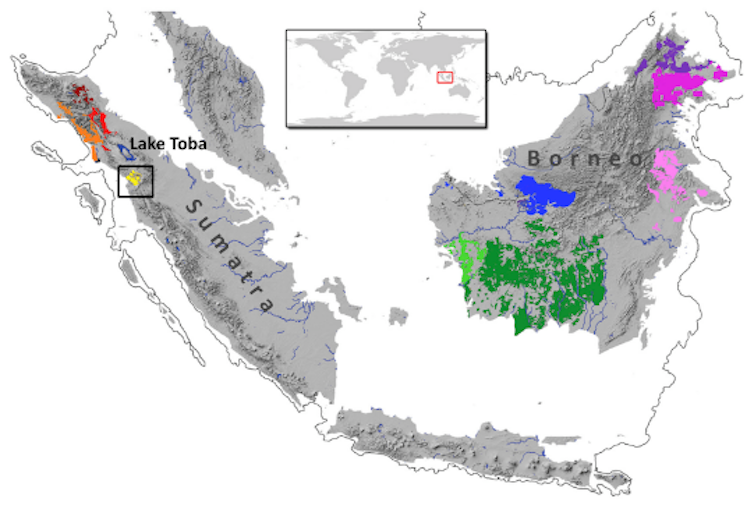 Orangutan populations in Sumatra and Borneo - the new species’ distribution is shown in yellow. Curr. Biol.

Read more: The lengthy childhood of endangered orangutans is written in their teeth

The existence of a group of orangutans in this region was first reported back in 1939. But the Batang Toru orangutans were not rediscovered until 1997, and then confirmed in 2003. We set about carrying out further research to see whether this isolated group of orangutans was truly a unique species.

On the basis of genetic evidence, we have concluded that they are indeed distinct from both the other two known species of orangutan: Pongo abelii from further north in Sumatra, and Pongo pygmaeus from Borneo.

The Batang Toru orangutans have a curious mix of features. Mature males have cheek flanges similar to those of Bornean orangutans, but their slender build is more akin to Sumatran orangutans.

The hair colour is more cinnamon than the Bornean species, and the Batang Toru population also makes longer calls than other orangutans.

To make completely sure, we needed more accurate comparisons of their body dimensions, or “morphology”. It was not until 2013 that the skeleton of an adult male became available, but since then one of us (Anton) has amassed some 500 skulls of the other two species, collected from 21 institutions, to allow for accurate comparisons.

Analyses have to be conducted at a similar developmental stage on male orangutan skulls, because they continue growing even when adult. Anton found 33 skulls of wild males that were suitable for comparison. Of 39 different measurement characteristics for the Batang Toru skull, 24 of them fall outside of the typical ranges of northern Sumatran and Bornean orangutans. 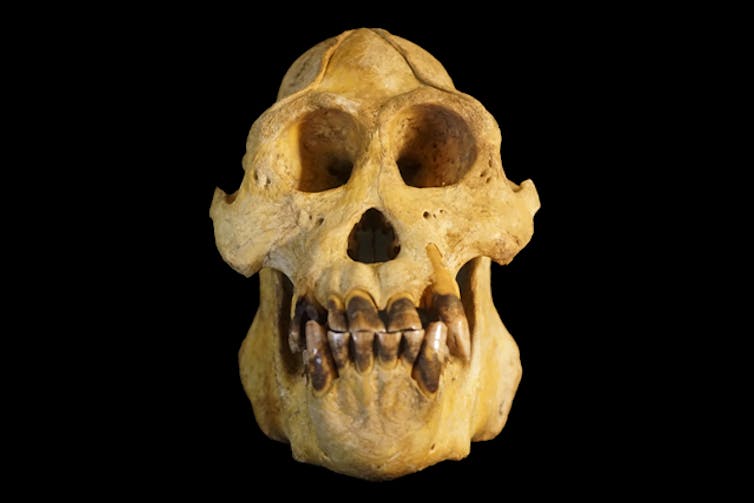 Overall the Batang Toru male has a smaller skull, but bigger canines. Combining the genetic, vocal, and morphological sources of evidence, we have confidently concluded that Batang Toru orangutan population is a newly discovered species – and one whose future is already under threat. 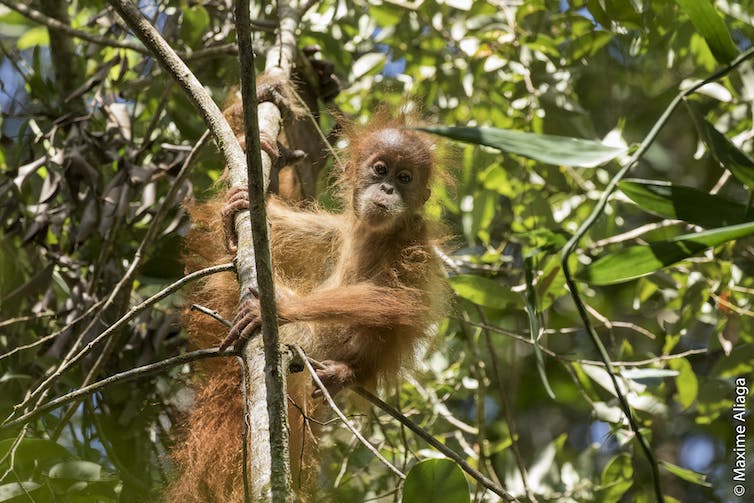 Despite the heavy exploitation of the surrounding areas (hunting, habitat alteration and other illegal activities), the communities surrounding the habitat of the Tapanuli orangutan still give us the opportunity to see and census the surviving population. Unfortunately, we believe that the population is fewer than 800 individuals.

Of the habitat itself, no more than 10 square km remains. Future development has been planned for that area, and about 15% of the orangutans’ habitat has non-protected forest status.

The discovery of the third orangutan in the 21st century gives us an understanding that the great apes have more diversity than we know, making it all the more important to conserve these various groups.

Without the strong support of, and participation from, the communities surrounding its habitat, the future of the Tapanuli orangutan will be uncertain. Government, researchers and conservation institutions must make a strong collaborative effort to make sure that this third orangutan will survive long after its discovery.